Prayer service at holidays consoles those grieving loss of loved ones 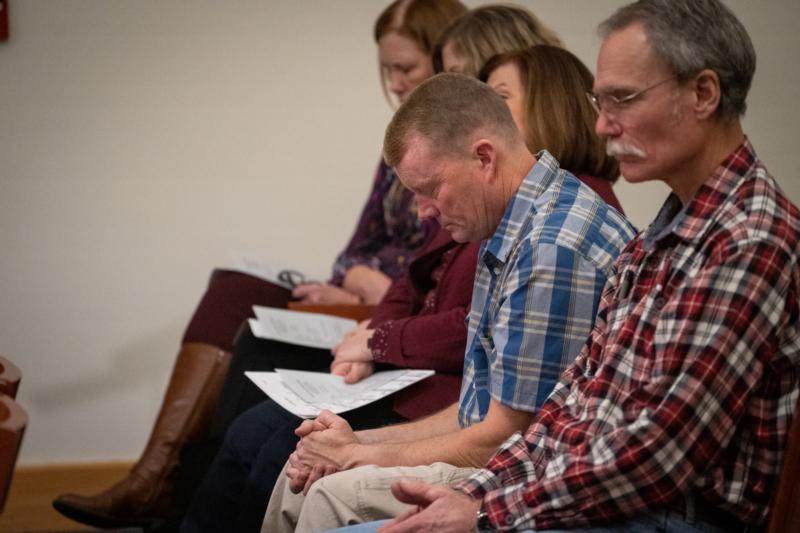 Doug DeVore, center, bows his head in prayer during the Service of the Longest Night held at St. Meinrad Archabbey in St. Meinrad, Ind., Dec. 14, 2019. DeVore attended the service, which was held for those grieving during the holiday season, to honor his late father, John. (CNS photo/Katie Rutter)

ST. MEINRAD, Ind. (CNS) — For most, the holidays are bright days of cheer, filled with laughter, joy and time spent with loved ones.

But for some, the darkness of grief smothers the Christmas spirit. There is an empty seat at the dinner table. A stocking that is no longer hung by the fire.

The loss of a loved one, whether it was recent or decades ago, is often felt more acutely during the celebrations of the holiday season.

“We have all these traditions that come from years with family or years with a spouse or a child,” said Eileen Dombo, a clinical social worker and associate professor in the School of Social Service at The Catholic University of America in Washington.

“Those traditions, if they’re not being done, or those people aren’t at these events and these traditional celebrations, become very painful,” she told Catholic News Service in a phone interview.

In an effort to comfort the grieving, St. Meinrad Archabbey in the town of St. Meinrad hosted the Service of the Longest Night Dec. 14. The annual prayer service takes place near the winter solstice, which is the shortest period of daylight during the year.

“We celebrate the birth of Christ on (Dec.) 25 which follows that solstice, that longest night,” explained Benedictine Father Adrian Burke, who led the service.

The service, he said, is “a way to anticipate that, but also to reflect on the fact that we’re still on the way. This is a world that’s torn by sin and division and a lot of darkness.”

Invitations for the Service of the Longest Night were sent to families who had purchased a casket from Abbey Caskets, a ministry founded by the monks of St. Meinrad to share monastic simplicity during burials.

Forty-four people attended the service, which began an hour after sundown. Three dozen candles glowed in front of the altar, each marked with the name of a deceased loved one.

The congregation sang several hymns and listened to passages from the Scriptures.

“Pain is a symptom of our love, and that’s a good thing,” Father Burke preached in his homily. “Grief indicates to us that we have benefited from that person being in our lives, that they were a blessing to us.”

Father Burke then blessed the hands of attendees with oil, a ritual intended to convey a sense of healing.

“It’s a way for them to connect with the power that does the work of healing … to get through their grieving stages in a healthy and wholesome way,” he said.

Father Burke also blessed the candles, which were sent home with attendees, and invited them to remember their loved ones in prayer.

“I don’t know how people that don’t have faith can make it through this,” said attendee Susan Jarboe, a resident of Tell City, Indiana. Jarboe lost her husband, Robert, a year ago Jan. 1. It was the 52nd anniversary of their first date.

“It’s given me the strength, the courage to face another day,” she said.

For those grieving the loss of a loved one during the holidays, Dombo suggested to “give yourself permission” to feel the grief while slowly moving forward.

“It’s really important to start new traditions. You want to honor the person who you lost, but it can often be very, very painful to continue old traditions and feel just that person’s loss and that person’s absence,” she said.

New traditions can honor the lost loved one; actions such as laying a wreath on their grave, sharing stories, or attending a service like that at St. Meinrad can strike the balance between moving forward and keeping the memories alive.

The family members and friends of those who are grieving can also play a supportive role during the holidays. The first step is to acknowledge the loss.

“Don’t pretend like this person never existed,” Dombo advised; even though it may seem better to avoid the painful topic, “not bringing them up is upsetting.”

“Tell a story of the loved one that’s positive, that brings up that person’s memory in a positive, loving way,” she concluded.

Family members can also ask their loved one how best to assist during the period of grief, and suggest resources like support groups or religious services.

“It does get better,” Doug DeVore said when asked to give advice to others who are grieving. DeVore, a resident of New Albany, Indiana, attended the Service of the Longest Night to honor his father, John.

“Know that things will get better and that your loved one is looking down,” DeVore said.

“Their spirit is around you in everything you do.”

NEXT: Sainthood sought for Catholic teacher of those with disabilities