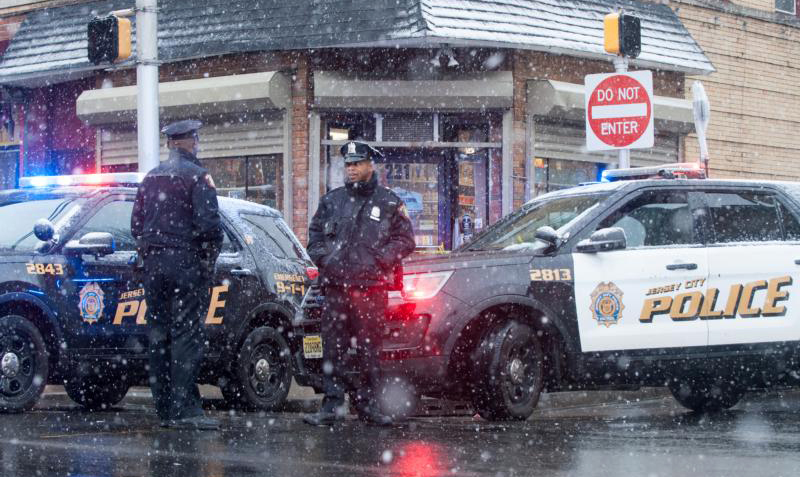 Police stand at the scene Dec. 11, 2019, of a gun battle that took place the day before involving two men around a kosher market in Jersey City, N.J. Six people, including a police officer and three bystanders, were killed in a furious battle that filled the streets of Jersey City with the sound of heavy gunfire for hours, authorities said. (CNS photo/Lloyd Mitchell, Reuters)

Six people, including a police detective and three customers in the supermarket, were killed in a furious battle that filled the streets of Jersey City with the sound of heavy gunfire for hours, authorities said.

The school was placed on lockdown during the nearby attack. None of the students was hurt.

When Sacred Heart reopened, counselors planned to be onsite to assist students and staff, according to a statement from the Archdiocese of Newark. Workers were fixing windows damaged by the gunfire.

“We are grateful for the immediate response by staff in handling this terrifying situation with all the students. All the children are safe, and parents were notified yesterday in a timely fashion,” the statement said. “We reiterate our gratitude to all the first responders in safeguarding the public during this deadly incident.”

It added that “as a Catholic community, we continue to grieve for the victims and for the family of Jersey City Police Detective Joseph Seals.”

A statement posted on the school’s Facebook page called the deadly shooting incident “tragic and disheartening” but also said the response to it illustrated the “strength, resilience and reliability of our children, their families and the Jersey City community. Our teachers, staff and children reacted with calm, intelligence and helpfulness. Everyone rose to the situation and displayed courage and kindness.”

News reports said Seals was shot at the Bay View Cemetery in Jersey City, allegedly by two suspects, who then fled to the kosher market, where they killed three customers and injured a fourth customer. They also shot and injured two other police officers. The suspects were later found dead inside the store.

The Hudson County Prosecutor’s Office said Seals was transported to a nearby hospital, where he died. Seals, a husband and father of five children, was a 15-year veteran of the Jersey City Police Department.

Jersey City Mayor Steven Fulop said in a Dec. 10 tweet: “Based on our initial investigation (which is ongoing) we now believe the active shooters targeted the location they attacked. Due to an excess of caution, the community may see additional police resources in the days/weeks ahead. We have no indication there are any further threats.”

Authorities initially described the shooting as a possibly random crime, but on Dec. 11, officials said that surveillance video indicated that the kosher market seemed to be deliberately marked for violence, raising the possibility that the shooting could have been an anti-Semitic attack.

“I do believe it is a hate crime,” Fulop said in an interview. “I don’t know how anybody can interpret it any other way. We live in a time where it is important to call out hate for what it is and do it quickly.”

PREVIOUS: Our Lady of Guadalupe is ‘mother of us all,’ says Los Angeles archbishop