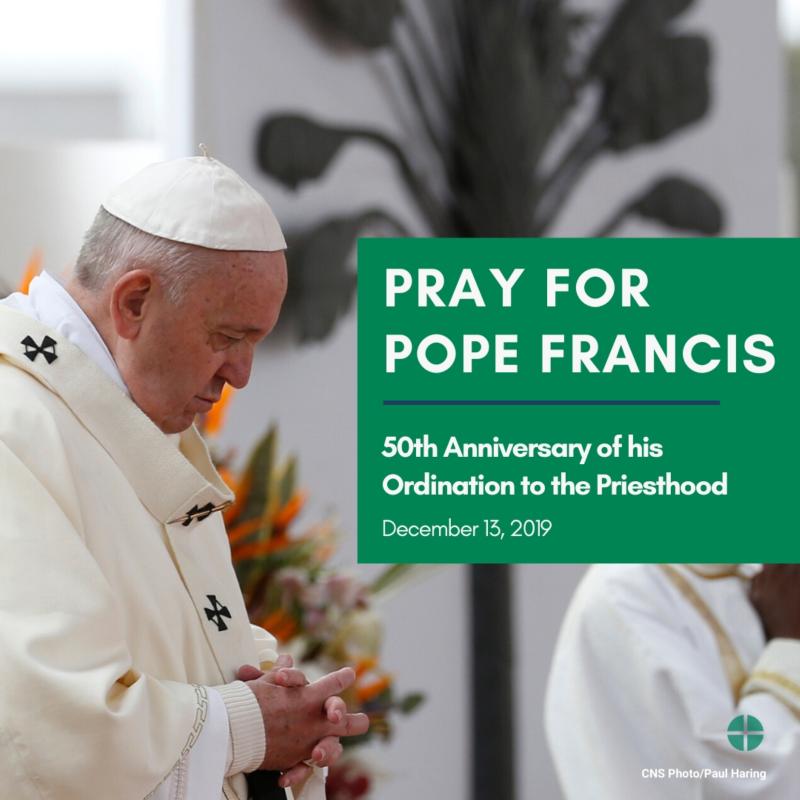 WASHINGTON (CNS) — The Catholic faithful across the United States are being invited to pray for Pope Francis as he celebrates 50 years as a priest.

Los Angeles Archbishop Jose H. Gomez, president of the U.S. Conference of Catholic Bishops, has sent a letter to bishops across the country asking them to encourage parishioners to honor the jubilee during Advent with special prayers and Mass petitions.

Four days before Pope Francis celebrates his 83rd birthday Dec. 17, he will celebrate 50 years as a priest — a ministry he sees as being a shepherd who walks with his flock and yearns to find those who are lost.

The prayers are being sent in English and Spanish to bishops. They were developed by the USCCB Secretariat for Divine Worship.

The USCCB also plans a social media effort to spread the message about the prayers.

Archbishop Gomez encouraged bishops to share the prayers with parishes, schools and other diocesan ministries.

Supporting materials sent with the letter noted that Dec. 13, the anniversary of the pope’s priestly ordination, is a weekday in Advent and the memorial of St. Lucy. Church practice allows for the celebrant to use an optional special Mass for the day, including one identified as “For the Pope.” The materials suggest that the Mass “would be appropriate to use in honor of the fifty years of priesthood of Pope Francis.”

The text of the prayer is:

Father of mercy, / we come before you with gratitude / for the 50 years of priesthood of Pope Francis, / whom you have made Peter’s successor. / Support him with the Spirit’s gifts / so that he can continue to preach the Gospel with priestly zeal / and lead the church with wisdom and strength and courage. / May his example of long and faithful service / be an inspiration to your priests and to all your faithful. / We ask this through Christ our Lord.

The petition texts are:

— For our Holy Father Pope Francis as we celebrate the 50th anniversary of his ordination to the priesthood, that Jesus the High Priest will continue to renew, increase, and strengthen in him the graces received at ordination as he carries out his sacred ministry in the Holy Church.

— That the example of the many years of faithful priesthood of Pope Francis will be a source of inspiration for all priests, and awaken in young people their own call to service in the church for the salvation of souls.

NEXT: Beatification for Archbishop Sheen postponed