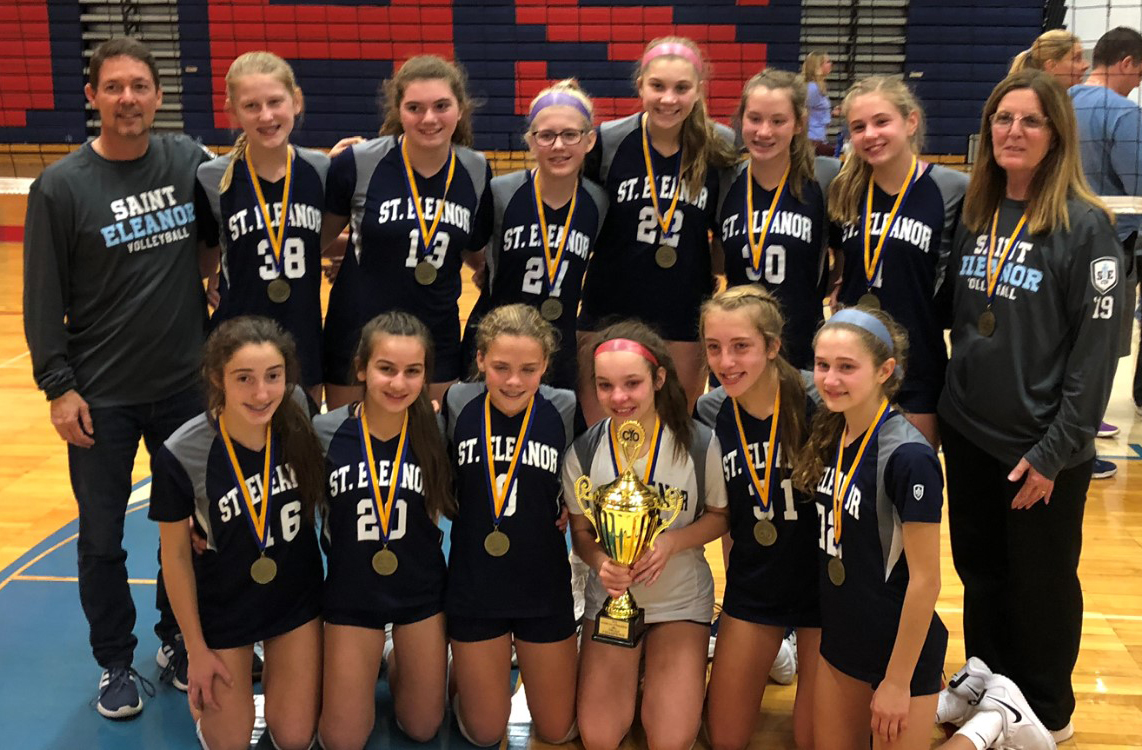 “We have a wonderful group of girls, a wonderful group of parents, and a wonderful parish community that is always supportive of CYO’s mission,” said Jim DeBald, longtime assistant to head coach Sue McNulty. “Having coached for as long as we have, I think we’ve come to appreciate and enjoy the journey of a season and the team’s development throughout the season, as much as the outcome.”

In the CYO archdiocesan championship, St. Eleanor’s upended St. Philip Neri of Lafayette Hill. It was a match between two teams from Region 21, which has produced numerous players who moved on to successful high school careers, as well as a few who played in college.

DeBald was quick to point out that Region 21 is much deeper than just those two juggernauts.

“Region 21 produces excellent volleyball teams such that the competition we face on a weekly basis makes everyone better,” said DeBald. “As Proverbs 27:17 says, ‘Iron sharpens iron.’

The glistening trophy case that houses the numerous trophies enveloped by St. Eleanor’s program is a byproduct of what occurs behind the scenes, such as the girls and coaches participating in a service project at God’s Kitchen in Pottstown, where they served food, cleaned up afterward, and interacted with the guests. The team also celebrated Mass together.

“We believe in CYO’s mission and that motivates us to continue to coach at St. Eleanor; in other words, we coach because we love it,” said DeBald. “We are happy for the girls and their success and notoriety that comes with winning.

“But as coaches, it’s the process of choosing the team, the planning that goes into our practices, the teaching moments, player development, the adversities, the hard work, and the motivational discussions.”

Mike Cooper, whose daughters Grace and Gabby have played volleyball at St. Eleanor’s, shared a poignant story that reflects the faith element of the CYO program.

“Last year when we were in Pittsburgh, we noticed a banner with a prayer hanging from the rafters,” said Cooper. “I took a picture of it and sent it to Jim (DeBald) and said we should have something like this in our gym.

“Fast forward, and now we do. Jim made note of this during his opening remarks when we welcomed all the teams to St. Eleanor’s. It shows how as Catholics, we can inspire and remind each other about our faith.”