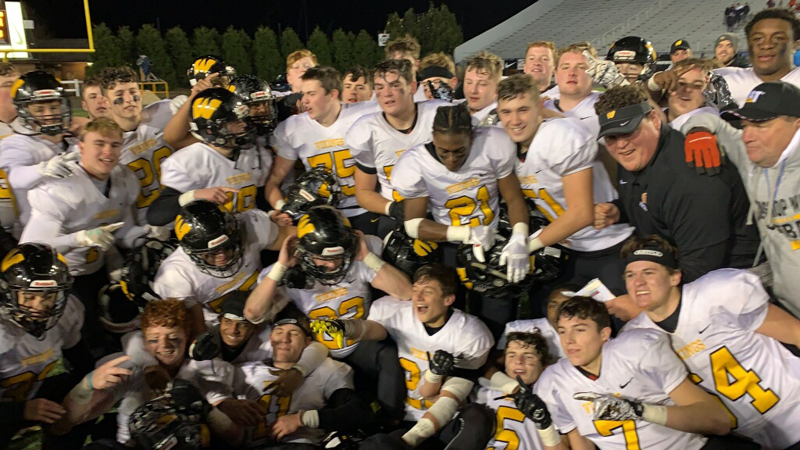 In Archbishop Wood’s 19-15 PIAA Class 5A state championship victory over Central Dauphin Dec. 6 at Hersheypark Stadium, each of those facets contributed to the program’s third state title in three years and sixth in the past nine.

“I’m at a loss for words,” said second-team All-Catholic senior linebacker Ryan DiVergilis. “We just bought in to all of what the coaches told us all week. I’m so proud of the guys on this team.”

An underclassman-dominated squad, the Vikings (11-3) finished the season on a seven-game winning streak. Along the way, they won by blowout and sometimes via bare survival.

The last two wins were of the latter. One week after needing a field goal by senior Rob Meyer with three seconds left in the semifinal game to defeat Gateway, 24-21, the District 12 champion Vikings saw a 12-0 lead disintegrate in the fourth quarter and trailed District 1 representative Cheltenham, 15-12, with 3:54 remaining in regulation.

“You just gotta drive it down the field,” said junior two-way starter Shane Collier. “Score a touchdown and win the game.”

Riding the broad shoulders of the offensive line and the rugged legs of junior Kaelin Costello (38 carries, 282 yards, touchdown), Wood moved from its own 35-yard line to the Cheltenham three with eight seconds left.

Knowing that a field goal would still be possible if they missed out on a touchdown, the Vikings tried one more play in hopes of winning the game without the anxiety of an extra session. 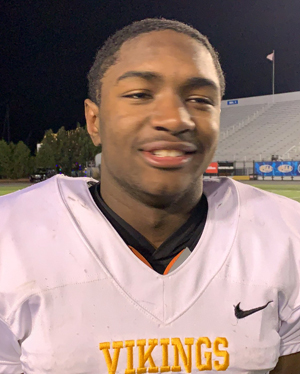 Cardel Pigford scored the game-winning touchdown on a pass reception with four seconds left in the game.

Junior quarterback Max Keller took the snap, dropped back a few steps, and fired a three-yard touchdown laser to junior Cardel Pigford a few yards deep in the end zone. Pigford bobbled slightly, but he quickly regained his composure, thus setting off a spirited celebration in the end zone, on the sideline, and in the crowd.

“The only thing I could think about was, ‘Catch this ball,’” said Pigford. “It’s just a great feeling.”

The aforementioned kicker Meyer — whose 22-yard field goal in the second quarter had followed senior teammate and fellow kicker Ryan Morgan’s 42-yard boot minutes earlier, and whose perfectly placed pooch kickoff that started the second half resulted in a turnover and subsequent 28-yard TD run by Costello — laughed when asked if he was relieved that he didn’t have to go out there with the season on the line.

“I was thinking, ‘Just stay calm,’” said Meyer, referring to the minutes that preceded the eventual winning touchdown. “I felt so good to just to go out there for a nice extra point and hit it through. Didn’t even think about it.”

After the Vikings rushed over to the Wood faithful to show off their state championship trophy, senior linebacker Tom Pomponi had a message for the naysayers who doubted the Vikings.

“Since day one, the only people that thought we were going to win this game were those people in the huddle and our fans,” said Pomponi, who led both teams with 11 tackles (four resulting in lost yardage) and the game’s only sack. “Everyone has worked so hard for this, and it’s so deserved.

Of that there is no doubt. 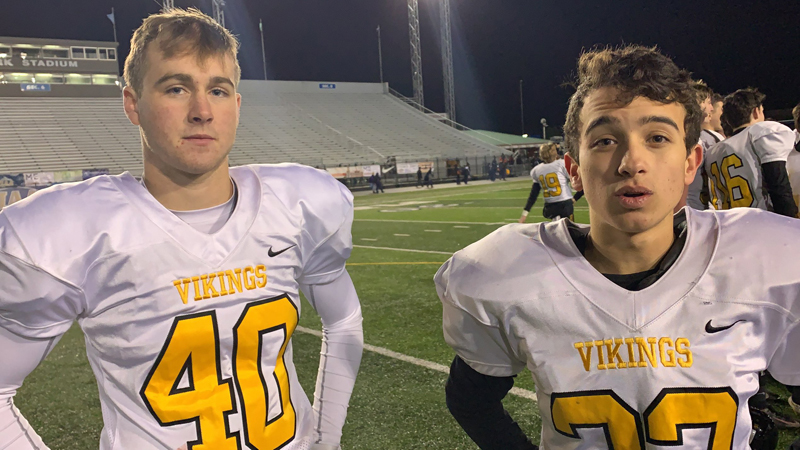