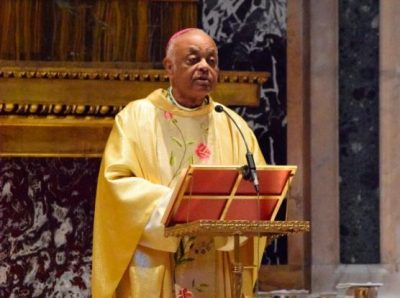 ROME (CNS) — Just as children run to their mother’s arms in times of trouble, Catholics — including popes and bishops — know they can and should turn to Mary, said Archbishop Wilton D. Gregory of Washington.

“Today we carry those problems that are ours to her — both those that we ourselves may have caused as well as those we inherited with the office that we now hold — and we fervently seek her wisdom and protection,” the archbishop said.

At Rome’s Basilica of St. Mary Major Dec. 5, the archbishop was the principal celebrant and homilist as bishops from Region IV — the District of Columbia, Delaware, Maryland, Virginia, U.S. Virgin Islands, West Virginia and the Archdiocese for the Military Services — celebrated a Mass during their “ad limina” visit.

Celebrating Mass in the chapel that houses the icon “Salus Populi Romani” (Our Lady, Health of the Roman People), the bishops were joined by seminarians from the region who are studying at the Pontifical North American College in Rome and a small group of pilgrims from the Archdiocese of Baltimore.

In his homily, Archbishop Gregory noted that the readings prescribed for Masses that day use ordinary rocks as symbols of strength and security. The reading from Isaiah exhorts people: ” Trust in the Lord forever! For the Lord is an eternal rock.” And in the Gospel reading from Matthew, Jesus tells his followers to be like “a wise man who built his house on rock.”

“As we gather for our ‘ad limina’ visit to the See of Peter — himself the very rock of the church — that image has some obvious significance for us,” Archbishop Gregory said. “Francis is the successor of Peter, and he is entrusted with being the secure foundation of faith that belongs to that unique office in the church.”

“Our church is secure because the Lord Jesus himself established it on the rock of Peter,” he said.

But the archbishop also noted how, when Pope Francis prepares to embark on a pastoral journey and when he returns, he visits the same chapel in the basilica to entrust his work to Mary as protectress.

“Even the ‘rock’ admits his compulsion to rely on that woman of perfect faith who continues to watch over the church with such motherly care,” Archbishop Gregory said.

No “ad limina” visit would be complete without a visit to the basilica, he said, because Mary knows the hearts of her sons and daughters, especially “those of us entrusted with the pastoral care of the church her Son established and continues to safeguard for all ages.”

After the Mass, the group — including one cardinal, three archbishops and 15 other bishops — visited the crypt below the basilica’s main altar. The bishops prayed before a large reliquary that contains relics of the manger of Jesus. Pieces of sycamore wood believed to be part of the crib in Bethlehem were brought to the church in the seventh century.

NEXT: Rise in populism due to lack of listening, dialogue, pope says