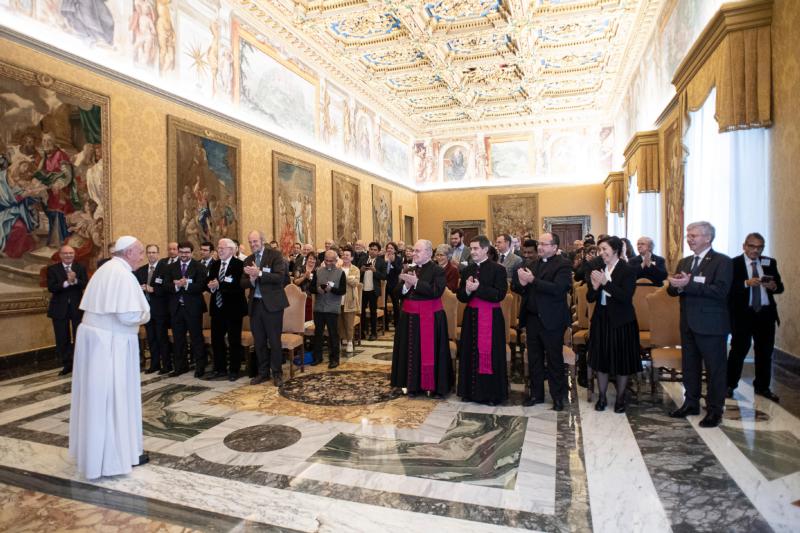 Pope Francis meets at the Vatican Dec. 7, 2019, with participants in a global forum of representatives of Catholic-inspired nongovernmental organizations. The pope encouraged the service, justice, development and volunteer organizations to attend to the formation of their members, be creative when resources are scarce and, especially, to work together. (CNS photo/Vatican Media)

VATICAN CITY (CNS) — Pope Francis encouraged Catholic-inspired service, justice, development and volunteer organizations to promote the adequate formation of their members, to use creativity when resources are lacking and coordinate joint efforts with others.

“The world today needs renewed daring and fresh imagination in order to open more avenues of dialogue and cooperation, to promote a culture of encounter where human dignity, according to God’s creative plan, may be at the heart” of all efforts, he said.

The pope spoke Dec. 7 during an audience at the Vatican with people taking part in a world forum of Catholic-inspired NGOs. The forum, held Dec. 5-7 in Rome, was centered on the theme, “Toward a More Inclusive Society.”

The pope thanked participants for their concrete efforts and attention to those who are vulnerable as part of making the world one “common home” and he underlined the importance of Catholic organizations cooperating on the international level.

Their work requires adequate formation for its members, the proper means necessary to fulfill their mission and teamwork, he said.

Pope Francis said they must be well acquainted with the church’s social doctrine, which offers “the framework of church principles adequate for best serving humanity,” and for being able to “translate it in your projects.”

He also encouraged them “to grow, even more, in professional skills and your ecclesial identity.”

It is important to have the “material resources necessary” to fulfill their mission, but he said they should not be discouraged when they are lacking.

“The church has always done great works with poor means,” he said, since so much also comes from God’s gifts and graces.

“Sometimes an excess of material means for carrying out a project is counterproductive because it deadens creativity,” he said.

Worse yet, there is an actual “sickness” in some institutions when an abundance of resources has led to the creation of too many administrative positions or to a large percentage of funding going to administrative costs and not where it needs to go, he said.

The pope encouraged groups to work together where possible and collaborate more since “the journey together” to serve the common good is a natural part of what it means to be a church.

NEXT: Pope calls for teaching youth to be active citizens