God is at work in the world, pope says at prayer service closing 2019 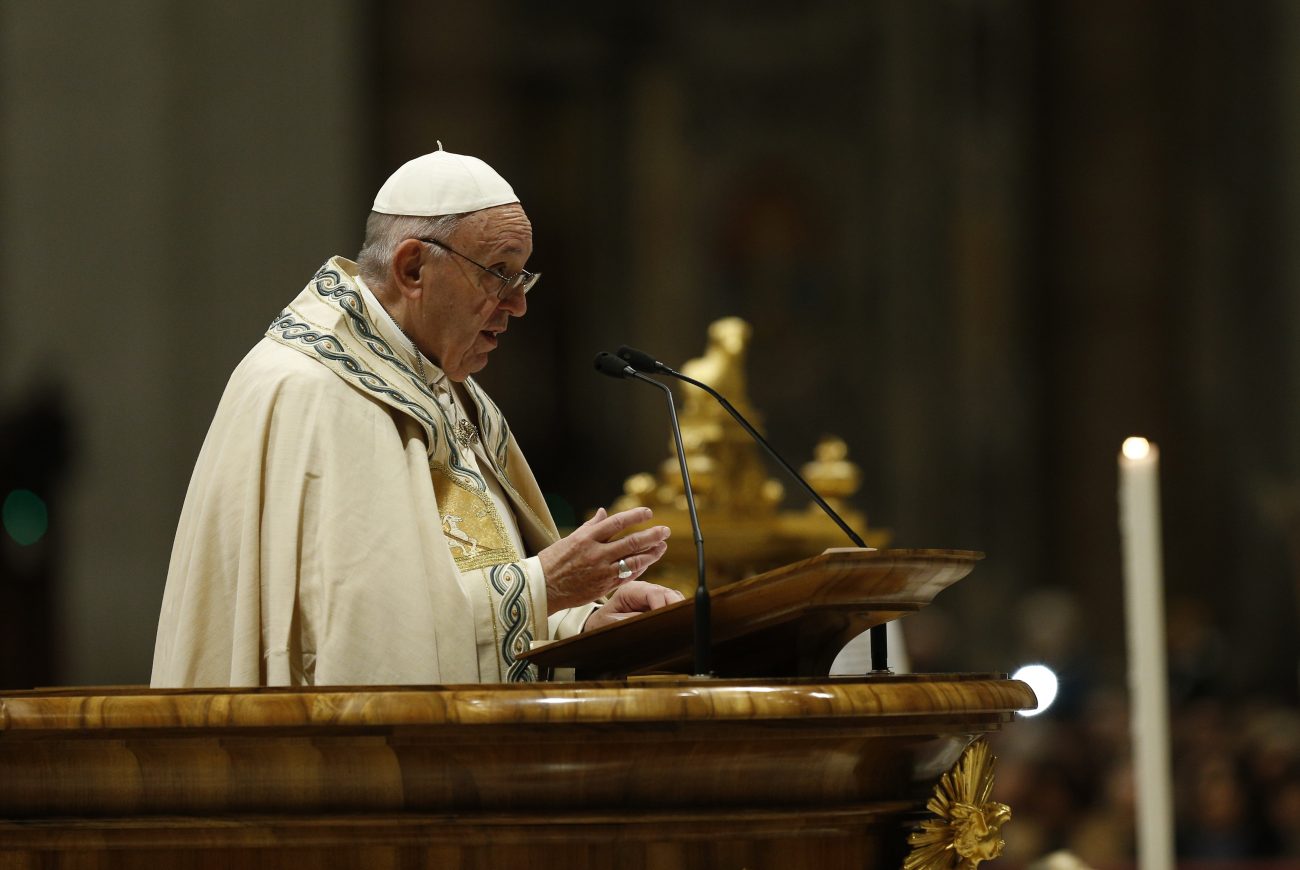 VATICAN CITY (CNS) — God sent his only begotten son into the world, where he continues to dwell in the hearts of men and women, “urging them to believe, to hope despite everything, and to love by working for the good of all,” Pope Francis said.

At an evening prayer service Dec. 31, Pope Francis looked back on 2019 and gave thanks for all the people he had met during the year who are living the Gospel, promoting solidarity, fighting for justice and caring for others.

The service included eucharistic adoration and Benediction, as well as the singing of the “Te Deum,” a hymn of praise and thanksgiving to God, for year ending.

For the prayer service on the vigil of the feast of Mary, Mother of God, a special Marian statue was brought to the Vatican from Foggia in southern Italy. According to legend, Mary appeared to a nobleman in the year 1001 and showed him the dark wooden statue, which is usually referred to as Mary Mother of God, Crowned. In the apparition, Mary told the man to build a shrine “without gold or precious ornaments” for the statue, which is why it also is known as Mary, Mother of the Poor.

In his homily, Pope Francis looked at 2019, particularly in the city of Rome and in the lives of its poorer citizens. The city’s mayor, Virginia Raggi, was seated in the front row.

“Truly, God has never stopped changing history and the face of our city through the little ones and the poor who live here,” the pope said. “He chooses them, inspires them, motivates them to act, makes them live in solidarity, pushes them to activate networks, to create virtuous ties, to build bridges and not walls.”

Celebrating the feast within the octave of Christmas, the pope noted how the Gospel described Jesus being born in Bethlehem, “a little town”; growing up in Nazareth, “a city never mentioned in Scripture except when it says, ‘Can anything good come from Nazareth?”’; and “thrown out” of the great city of Jerusalem, where he died on a cross outside its walls.

“God pitched his tent in the city,” the pope said, and he continues to act in people’s lives.

“We are the ones who need to ask God for the grace of new eyes capable of a ‘contemplative gaze, a gaze of faith which sees God dwelling in their homes, in their streets and squares,'” he said, quoting his 2013 document, “The Joy of the Gospel.”

In the Bible, he said, the prophets warn people not to give into the temptation of thinking God is present only in the temple. “He lives in the midst of his people, walks with them and lives their lives. His fidelity is concrete, it is proximity to the daily existence of his sons and daughters.”

“In fact, when God wanted to make all things new through his son, he did not start in the temple, but in the womb of a young and poor woman,” the pope said. “This choice of God is extraordinary. He doesn’t change history through the powerful men of civil and religious institutions, but beginning with a woman from the periphery of the empire — Mary — and with sterile wombs like that of Elizabeth.”

While Rome, like any other city, has its problems with “inequality, corruption and social tensions,” Pope Francis said, it also is a place where “God sends his Word, which through the Spirit nests in the hearts of its inhabitants,” leading them to believe and to do good works.

God “entrusts us with his Word and urges us to throw ourselves into the fray, to get involved in meeting and relating to the inhabitants of the city,” the pope said.

“We are called to encounter others and let ourselves hear about their lives, their cry for help,” he said. “Listening is already an act of love!”

Pope Francis urged Christians to make time for others, to talk with them and to use a “contemplative gaze” to recognize “the presence and action of God in their lives.”

“Give witness with actions more than with words of the new life of the Gospel,” the pope said, because evangelization “is truly a work of love that changes reality.”

When people share the good news in word and deed, he said, “fresh air will circulate in both the city and the church.”

“We must not be afraid or feel inadequate for such an important mission,” he said. “Let us remember this: God does not choose us because of our abilities, but precisely because we are and feel small.”

PREVIOUS: Put the phone away and talk to each other, pope urges families

NEXT: Pope begins New Year with apology, prayers for peace