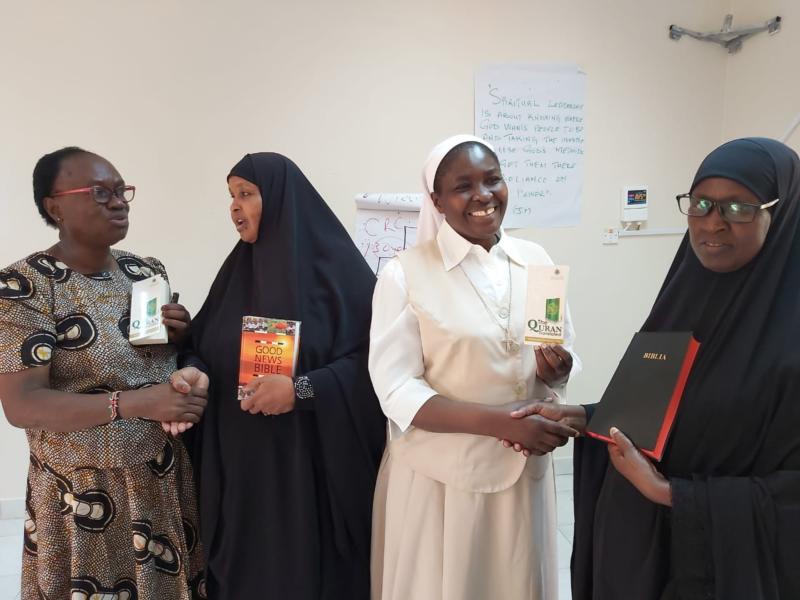 A Catholic woman and nun exchange holy books with Muslim women leaders Dec. 13, 2019, in Garissa, Kenya. The Catholics gave out copies of the Bible to the women while they received copies of the Quran. (CNS photo/courtesy Father Nicholas Mutua)

NAIROBI, Kenya (CNS) — Catholic leaders in northeastern Kenya are collecting donations to gift Muslims over Christmas season, despite attempts by al-Shabab Islamist militants to ignite a rift between the two faiths.

Priests serving in the region near the border with Somalia said that Muslim leaders have in the past delivered gifts to the church during key religious celebrations such as Eid al-Fitr.

“It’s the church’s turn to give this time. There are families in the cold due to the current heavy rains. Some are trapped in the floods. We want to give them the gifts so that they can feel the warmth of the season,” said Father Nicholas Mutua, justice and peace coordinator in the Diocese of Garissa.

“We will move to prisons and children’s homes. We will also deliver some of the donations to needy families. It all depends on how much we are able to collect,” he said.

“I am convinced these are few bad elements,” he said. “Contrary to perceptions, the Muslims have been with and know we are both facing threats from the militant group.”

In some of the attacks, Muslims stepped in to save the lives of Christians. In 2015, Muslim teacher Sarah Farah was shot as he shielded Christians during a bus attack in Mandera. He died weeks later, but his actions inspired a short film, “Watu Wote” (“All of Us”) which received an Oscar nomination in 2017.