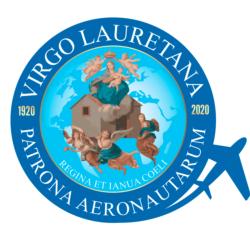 This is the logo for the Jubilee Year of Our Lady of Loreto. (CNS photo/Lauretan Jubilee)

VATICAN CITY (CNS) — Celebrating a jubilee year centered around Our Lady of Loreto, Catholics are called to “fly high” toward God and toward holiness, letting Jesus be their “pilot,” said Archbishop Fabio Dal Cin, papal delegate of the Italian Shrine of Our Lady of Loreto.

Pope Francis proclaimed the Lauretan Jubilee, which was to open on the feast of the Immaculate Conception, Dec. 8, and conclude in 2020 on the feast of Our Lady of Loreto, Dec. 10.

The jubilee marks the 100th anniversary of the papal proclamation of Our Lady of Loreto as patron saint of aviators and those who work in aviation or travel by air.

Outlining jubilee events at a Vatican news conference Dec. 3, Archbishop Dal Cin said the connection between aviators and Our Lady of Loreto was solidified by members of the Italian air force immediately after World War I. Tradition holds that the Holy House in Loreto actually is Mary’s house from Nazareth, which angels flew to Italy in 1294 after a brief stop in Yugoslavia.

The theme chosen for the jubilee year is “Called to Fly High.”

The Shrine of Our Lady of Loreto near Italy’s Adriatic coast will host jubilee pilgrimages for specific categories of people throughout the year. It will begin with priests and deacons in February.

For International Women’s Day March 8, the shrine will host a special pilgrimage of women pilots. And March 24, the 100th anniversary of Pope Benedict XV’s proclamation of Our Lady of Loreto as patron of aviators, members of the Italian air force will gather at the shrine.

The Italian airline Alitalia will fly a statue of Our Lady of Loreto to 20 civilian airports throughout the country during the year; the statue will stay in the airport chapels for a two-week period of veneration. Alitalia also has promised to fly another copy of statue internationally, beginning with the pope’s hometown, Buenos Aires. Other destinations had not been announced as of Dec. 3.

Archbishop Dal Cin told reporters the jubilee is not only for those who work in aviation or travel by air; it is for “all those devoted to Our Lady of Loreto.”

“The flight of airplanes,” he said, can be “a metaphor for our existence. All of us are called to fly high because God offers each person the possibility of a good — that is, holy — life.”

Pope Francis’ prayer for the jubilee begins, “O God, your glory is higher than the heavens; as you raise us upward in flight let our spirit too rise high and grant us the wings of faith, hope and charity.”

The prayer includes a special invocation for air travel, though, asking God that it would be a way of “uniting men and women of every continent in a fraternal embrace of friendship, solidarity and peace.”

NEXT: Trust in Christ, not in psychics, sorcerers, pope says at audience