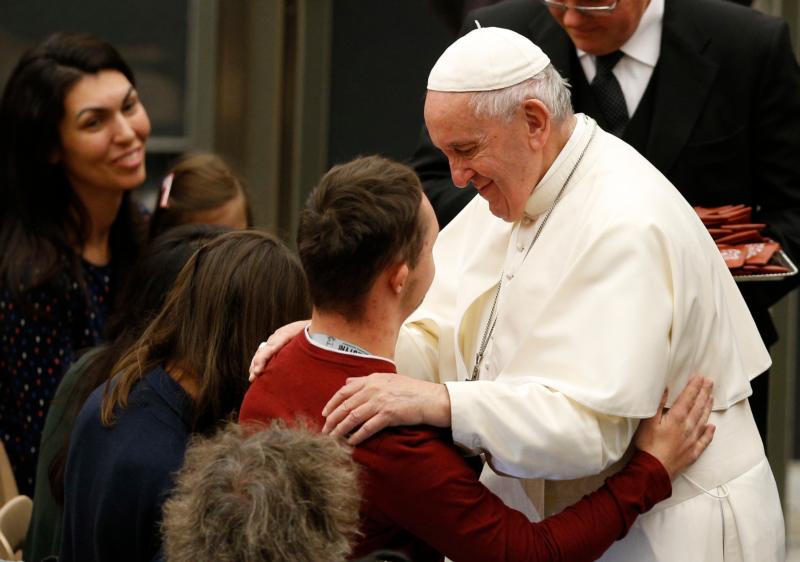 Pope Francis embraces a man as he meets the disabled during his general audience in Paul VI hall at the Vatican Dec. 11, 2019. (CNS photo/Paul Haring).

VATICAN CITY (CNS) — There always will be martyrs among Christians in the world, Pope Francis said.

Martyrdom “is the sign that we are on Jesus’ path; it’s a blessing from the Lord that within the people of God there is someone who gives this witness of martyrdom,” he said Dec. 11 during his weekly general audience in the Vatican’s Paul VI hall, which was decorated with a large Christmas tree and Nativity scene.

The pope continued his series of talks on the Acts of the Apostles by looking at the increasing amount of suffering and persecution the Apostle Paul faced as he spread the Gospel.

“Paul is not just an evangelizer filled with passion, the intrepid missionary among pagans who brings new Christian communities to life, he is also a suffering witness of the Risen One,” the pope said in his catechesis.

Much like Jesus, Paul faced fierce persecution in Jerusalem, and he was put in chains following his arrest on charges of preaching against the law and the temple.

While most people saw his chains as a sign of him being a criminal, the pope said, Paul saw the chains with “the eyes of faith” as a sign of his love for Jesus.

“For Paul, his faith is not a theory, an opinion about God and the world, but it is the impact of God’s love in his heart, it is love for Jesus Christ,” he said.

“Paul teaches us perseverance amid trials and the ability to see everything with the eyes of faith,” the pope said. “Let us ask the Lord today, through the apostle’s intercession, to rekindle our faith and help us be completely faithful to our vocation as Christians, as disciples of the Lord, as missionaries.”

To further underline how, even in modern times, Christians still face suffering and persecution, the pope spoke about meeting with pilgrims from Ukraine earlier that morning.

He explained how Eastern-rite Catholics in Ukraine had been persecuted for their faith under communism, “but they did not negotiate the faith.”

“In the world today, including in Europe, many Christians are being persecuted. And they give their life for their faith,” he said.

“They are persecuted with ‘white gloves,’ that is, they are pushed aside, emarginated,” the pope said. “Martyrdom is the context of a Christian, of a Christian community. There always will be martyrs among us.”

The group of pilgrims that met with Pope Francis included bishops, priests, religious and laypeople from the Byzantine Catholic Eparchy of Mukachevo, which was celebrating the 30th anniversary of no longer having to practice the faith clandestinely under Soviet oppression.

The pope told them that their church “is the mother of many martyrs,” recalling the example of their bishop, Blessed Theodore Romzha, who was killed by the Soviet secret police in 1947 and who was beatified as a martyr by St. John Paul II in 2001.

“In the darkest hours of your history,” Pope Francis said, “he knew how to guide the people of God with evangelical wisdom and courage, a tireless man,” who, like Christ the good shepherd, gave his life for his flock, the pope said.

Pope Francis noted that many of the pilgrims’ own relatives had to risk their freedom or life in order to hand down the “teaching of the truth of Christ” to them and future generations.

NEXT: Indonesian bishops to take steps to address claims of sexual abuse