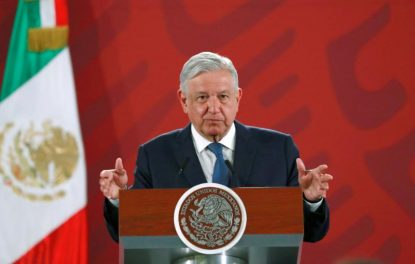 Mexican President Andres Manuel Lopez Obrador attends a news conference at the National Palace in Mexico City, Mexico Dec.10, 2019. Lopez Obrador has expressed disapproval of a proposal that would scrap some of the restrictions separating church and state, but also could mean breaking the seal of confession. (CNS photo/Henry Romero, Reuters)

MEXICO CITY (CNS) — Mexican President Andres Manuel Lopez Obrador has expressed disapproval of a proposal that would scrap some of the restrictions separating church and state, but also could have broken the seal of confession.

“I think it’s a subject that shouldn’t be touched,” Lopez Obrador said at a Dec. 18 news conference.

“It’s been resolved for more than a century and a half,” he added. “The majority of Mexicans are in agreement with the lay state prevailing, what the constitution establishes.”

Controversy erupted in Mexico after a senator with the president’s Morena party introduced a law that would have allowed for an expansion of privileges provided to religious organizations.

The expanded privileges would have included an ability to own and operate radio and TV stations, provide protections for conscientious objections, allow the government and religious associations to forge partnerships and grant permission for chaplains to operate openly on military bases and with security forces.

The law also would have required church officials to immediately report any knowledge of wrongdoing to the authorities. This could potentially break the seal of confession, said Rodolfo Soriano-Nunez, a sociologist who studies the Catholic Church.

Mexican clergy have stayed mum on the proposed law, though Cardinal Carlos Aguiar Retes of Mexico City came out in support of the president.

The Mexican state has long championed a strict separation of church and state. Mexico established relations with the Vatican in 1992 and removed many restrictions on religious organizations.

The proposal comes as Lopez Obrador has courted closer relations with some evangelical congregations and even tapped them to help distribute a government-published book on morals and citizenship through their churches.

NEXT: Kenyan bishops pray for 300,000 affected by flooding