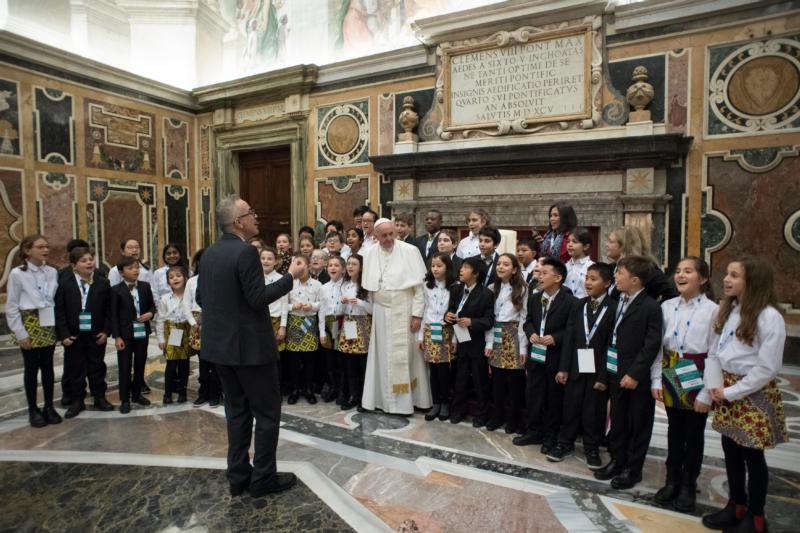 Pope Francis poses with children from the Piccolo Coro di Piazza Vittorio who sang during his Dec. 15 audience with an international group of singers and musicians who will perform at a benefit concert at the Vatican. (CNS photo/LOsservatore Romano)

VATICAN CITY (CNS) — The Christmas season is a time to reflect on what life is all about, Pope Francis told an international group of performers.

“The time before Christmas calls us to ask ourselves, ‘What is it that I am waiting for in my life? What is the great desire of my heart?’ You too, with your songs, help awaken or reawaken this healthy human ‘yearning’ in the hearts of many people,” he said.

The pope met Dec. 13 with the group of singers, songwriters, musicians and conductors the day before they were to perform in the Vatican’s Paul VI hall for a benefit concert to help protect the Amazon and support indigenous communities there.

The lineup was scheduled to include: Lionel Richie, the U.S. Grammy Award-winning singer and songwriter; Susan Boyle, who was a 2009 finalist on “Britain’s Got Talent”; and Bonnie Tyler, whose songs “It’s a Heartache” and “Total Eclipse of the Heart” are among the best-selling singles of all time.

The Charleston Gospel Choir and several Italian performers were also part of the lineup for the 2019 “Christmas Concert in the Vatican,” sponsored by the Vatican Congregation for Catholic Education.

The pope told the performers and concert organizers that God is the author of the “yearning” people feel in their heart, “and he comes to meet us by this route.”

God cannot be found along the path of “vain compulsion to acquire possessions or to keep up appearances. It is not there that God comes; no one will meet on that route. But surely he comes wherever there is hunger and thirst for peace, justice, freedom and love,” the pope said.

“Dear artists, I thank you for all that you do. I wish you the best for your activities and your spiritual growth,” the pope said, asking that their hearts be touched by the “mystery of Christmas, so that you can convey some of that same tenderness to those who listen to you.”

Donations and proceeds from ticket sales were to go toward a Salesian project helping indigenous communities in northwestern Brazil and to a campaign of Scholas Occurrentes to raise awareness in 450,000 schools around the world promoting reforestation.

The show, recorded before a live audience Dec. 14, was to be broadcast by Italian television Christmas Eve.

Later in the day, Pope Francis was scheduled to take part — via live video link-up — in the launch of a U.S. headquarters of Scholas Occurrentes, which is Latin for “schools for encounter.”

The global educational project, launched by Pope Francis in 2013, works to encourage social integration ‎and a culture of encounter among high school students through sports, arts and technology.

Archbishop Jose H. Gomez of Los Angeles, the city’s mayor, Eric Garcetti, along with about 30 Catholic high school students of the Archdiocese of Los Angeles, were to join in from Los Angeles in the live videoconference as were Scholas students in Haiti, Japan and Spain.

NEXT: Priest, ex-spokesman for 9 Indian dioceses, arrested for fraud