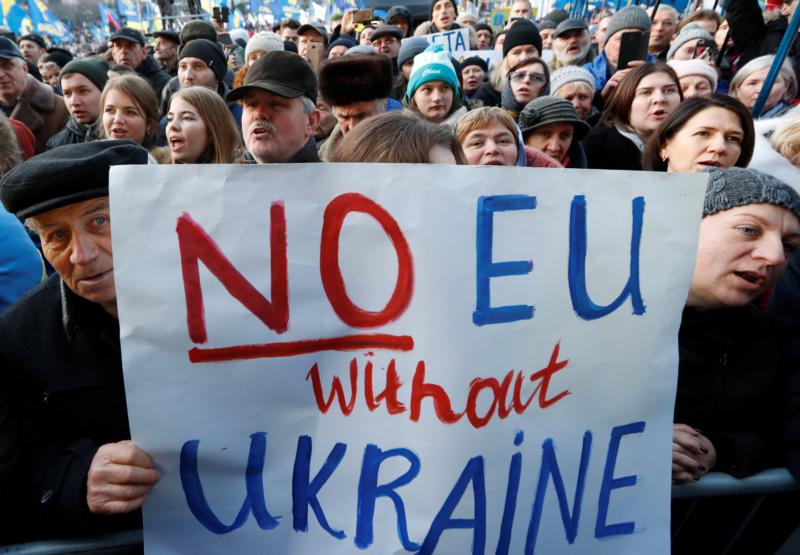 People take part in a rally in Kyiv, Ukraine, Dec. 8, 2019, ahead of the so-called “Normandy Summit” in Paris, where leaders of Ukraine, Russia, Germany and France will meet to discuss steps to resolve the conflict in eastern Ukraine. Pope Francis offered prayers for the summit. (CNS photo/Valentyn Ogirenko, Reuters)

VATICAN CITY (CNS) — Pope Francis offered prayers for a summit in France that will seek to bring an end to the ongoing war in eastern Ukraine.

Addressing pilgrims in St. Peter’s Square Dec. 8, the pope expressed his hope that the meeting, known as the “Normandy Summit,” will “seek solutions to the painful conflict.”

“I accompany the meeting with prayer, an intense prayer, because peace is needed there, and I invite you to do the same, so that this initiative of political dialogue can contribute to bringing fruits of peace in justice to that territory and its people,” he said.

Russian-backed separatists have been battling Ukrainian government forces since 2014 after Russia annexed the Crimean Peninsula. According to the BBC, an estimated 13,000 people from both sides of the conflict have died so far.

In an interview with Vatican Radio Dec. 8, Archbishop Claudio Gugerotti, apostolic nuncio to Ukraine, said the pope’s words were a source of “consolation” and that the meeting was important for the “future of this country and the peace that everybody desires.”

“We are all very happy that the Holy Father raised his voice, which of course spreads all over the world, in order to support” the summit, Archbishop Gugerotti said.

The pope’s words, he added, may help “people understand that not everything depends on the words of the politicians; it very much depends on the prayer and obedience to the wish of God because peace is a gift of God.”

People have strong expectations for the summit “and hope that peace will be established, and the war will finish because we are all exhausted,” he said. “Many people are suffering in an incredible way because of this persistent state of war.”

PREVIOUS: Pope calls for teaching youth to be active citizens