Pope says he is ‘scandalized’ by anti-migrant rhetoric 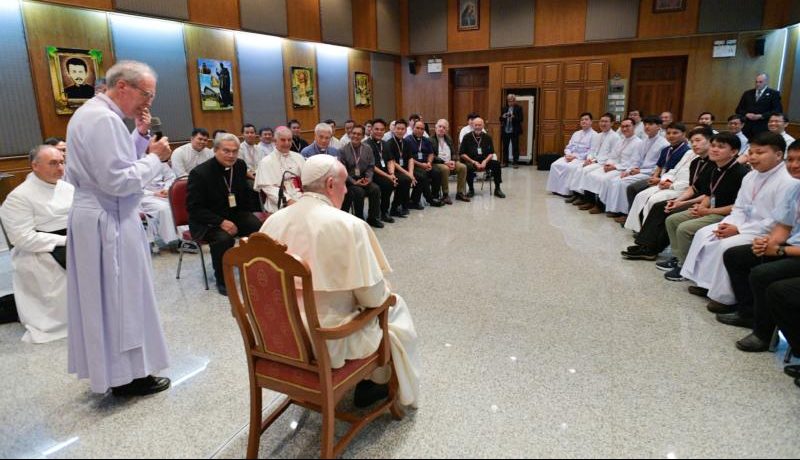 Pope Francis meets with Jesuits in Tha Kham, Thailand, Nov. 22, 2019, during his apostolic trip to the Asian country. In his customary question-and-answer session with his Jesuit confreres, Pope Francis spoke about resistance to addressing climate change and about hostility to migrants and refugees. (CNS photo/Vatican Media)

VATICAN CITY (CNS) — Pope Francis told Jesuits in Thailand he was “scandalized” by some of the anti-migrant rhetoric he hears in Europe, and he is convinced people are being manipulated into thinking the only way they can preserve their lifestyles is by building walls.

“The phenomenon of migration is compounded by war, hunger and a ‘defensive mindset,’ which makes us think only from a state of fear and that by reinforcing borders we can defend ourselves,” Pope Francis said Nov. 22 when he met 33 Jesuits in Thailand.

The Jesuit magazine, La Civilta Cattolica, published a transcript Dec. 5 of the pope’s responses to questions the Jesuits asked the pope during the meeting in Tha Kham, Thailand.

Often on trips abroad, Pope Francis spends time with local Jesuit communities and holds a question-and-answer session with them. Weeks later, a transcript of the exchange is published by La Civilta Cattolica.

A Jesuit who works for Jesuit Refugee Service in Thailand raised the question of ministry among migrants and refugees.

“The phenomenon of refugees has always existed, but today it is better known because of social differences, hunger, political tensions and especially war,” the pope responded. ” For these reasons, migratory movements are intensifying.”

Much of the world responds with a “throwaway policy,” he said; “refugees are waste material. The Mediterranean has been turned into a cemetery. The notorious cruelty of some detention centers in Libya touches my heart. Here in Asia we all know the problem of the Rohingya.”

“I must admit that I am scandalized by some of the narratives I hear in Europe about borders,” the pope told his Jesuit confreres. “In other parts (of the world) there are walls even separating children from their parents.”

Strangely enough, the pope said, those same governments do not seem to be able to build a wall to keep illegal drugs out.

Pope Francis noted that the Bible and millennia of Christian teaching have encouraged welcoming the stranger. “But there are also many little customs and traditions of hospitality, such as leaving an empty chair on a festive day in case an unexpected guest arrives.”

“If the church is a field hospital,” he told the Jesuits, “this is one of the camps where most of the injured are found.”

But, recalling the visit to Thailand in 1981 of Jesuit Father Pedro Arrupe, then superior general of the order, Pope Francis said the work with refugees and any other social apostolate must be supported by prayer.

“We must remember it well: prayer,” the pope said. “That is to say, in that physical periphery do not forget this other one, the spiritual one. Only in prayer will we find the strength and inspiration to engage fruitfully with the messy consequences of social injustice.”

Another Jesuit asked the pope about balancing the need to denounce unjust social systems and “the prudence that suggests you sometimes keep quiet for the greater good or not to complicate situations further.”

Pope Francis said there was no easy answer to that question. The right way can be found only through prayer and the discernment of the concrete situation. “There are no rules that are definitive and always valid.”

And, he added, sometimes a broad boulevard of opportunity will not open up and, even if it did, it may not be the right path to take. “Sometimes, more than highways, small paths work better; these are the routes through the peripheries that nonetheless get you to your destination. They’re not rigid, big or obvious, but they’re effective.”

“Sometimes, however, when we want everything to be well-organized, precise, rigid and always defined in the same way, then we become pagans, even if disguised as priests,” the pope said. “I think Jesus spoke a lot about pharisaic hypocrisy in this regard.”

Another Jesuit asked Pope Francis how they should minister to Catholics who have been divorced and civilly remarried. “I could answer you in two ways: in a casuistic way, which however is not Christian, even if it can be ecclesiastical; or according to the magisterium of the church as in the eighth chapter of ‘Amoris Laetitia,'” his 2016 apostolic exhortation on the family.

The document, he said, urges pastors to “journey, accompany and discern to find solutions. And this has nothing to do with situation ethics, but with the great moral tradition of the church.”

Asked about the reception of his 2015 encyclical, “Laudato Si’, on Care for Our Common Home,” Pope Francis said the Paris Climate Accord was a big step forward in addressing climate change.

“But then the conflicts began, the compromises between what was hoped for and the ‘wallet,’ the economic interests of certain countries,” he said. “And so, some countries withdrew.”

Still, he said, people today, especially young people, “have become much more aware than before of the need for the care of our common home and its importance.”

Young people understand the encyclical “with their hearts,” he said. Their commitment is “is a promise for the future.”

PREVIOUS: Rise in populism due to lack of listening, dialogue, pope says