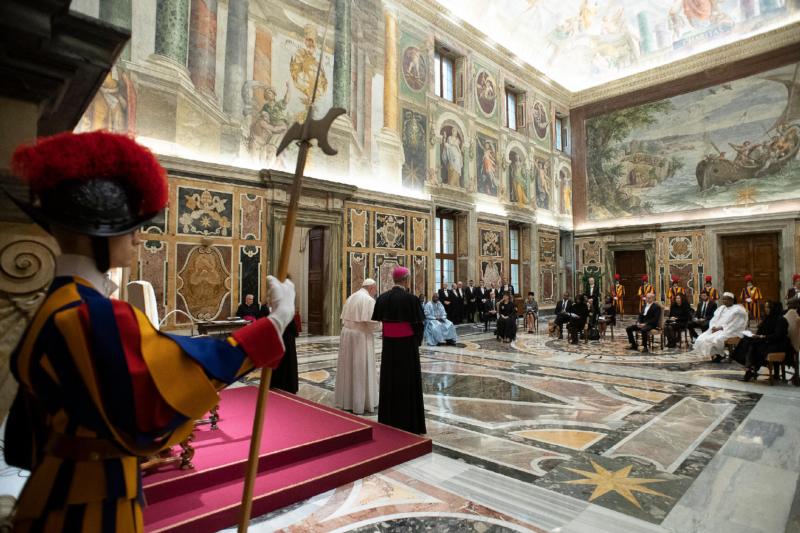 Pope Francis meets in the apostolic palace Dec. 19, 2019, with six new ambassadors to the Vatican who were presenting their letters of credential to the pope. The new ambassadors represented Kenya, Niger, Mali, Latvia, Andorra and Seychelles. (CNS photo/Vatican Media)

VATICAN CITY (CNS) — Peace requires setting aside indifference and fear so that a feeling of mutual respect may grow and flourish, Pope Francis told diplomats.

“This, in turn, leads to the development of a culture of inclusion, a more just economic system and various opportunities for the participation of all in social and political life,” he said.

The pope’s comments came Dec. 19 in a speech to six new ambassadors to the Vatican who were presenting their letters of credential to the pope. The new ambassadors represented Kenya, Niger, Mali, Latvia, Andorra and Seychelles.

Speaking to the group of diplomats, the pope dedicated his brief talk to “the path to peace,” as a journey that includes hope, dialogue, reconciliation and “ecological conversion.”

Because the world is still marked by conflict, social division and inequality, he said, “it is essential to undertake a constructive and creative dialogue based on honesty and truth, with the aim of fostering greater fraternal solidarity among individuals and within the global community.”

“Your presence here is a sign of the resolution of the nations you represent and of the international community as a whole to address the situations of injustice, discrimination, poverty and inequality that afflict our world and threaten the hopes and aspirations of coming generations,” he told the diplomats.

The path to peace, he said, has to start with reconciliation, “which entails renouncing our desire to dominate others and learning to see one another as persons, sons and daughters of God, brothers and sisters.”

“Only when we set aside indifference and fear can a genuine climate of mutual respect grow and flourish,” he said.

However, he added, “the path to peace is blocked also by a lack of respect for our common home and particularly by the abusive exploitation of natural resources viewed only as a source of immediate profit, without consideration of the cost to local communities or to nature itself.”

“Our world is facing a series of complex challenges to the sustainability of the environment, not only for the present but also for the immediate future,” the pope said.

Commitment to “responsible stewardship of the earth and its resources is urgently demanded at every level, from family education, to social and civic life, and to political and economic decision-making,” he said. Such cooperation can advance “the flourishing of life and the integral development of every member of our human family.”

Pope Francis said the Catholic Church is committed to cooperating with all those who desire to promote “the good of each person and of all peoples.”

“It is my prayerful hope that your mission will contribute not only to the consolidation of the good relations existing between your nations and the Holy See, but also to the building of a more just and peaceful world in which human life, dignity and rights are respected and enhanced.”