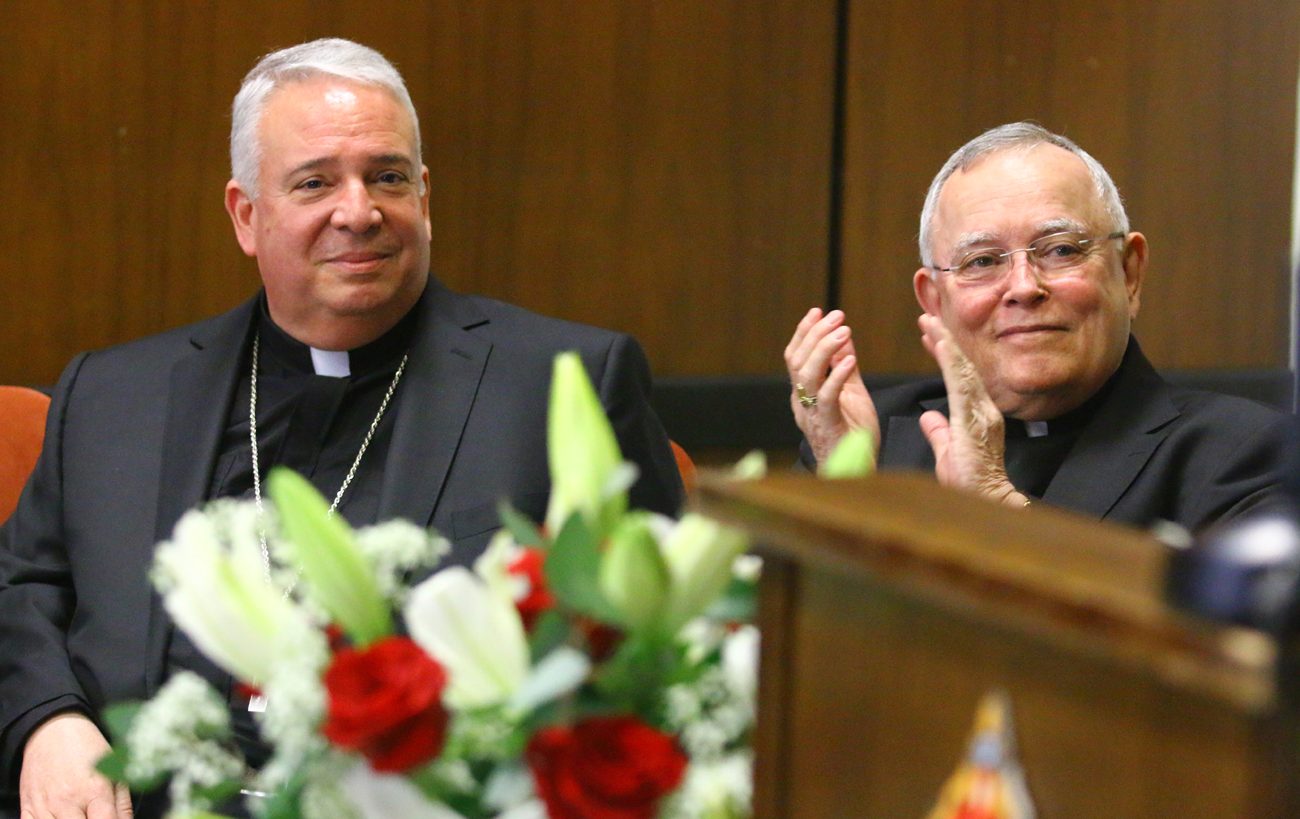 Archbishop Charles J. Chaput (right) applauds as his successor is introduced as the next archbishop of Philadelphia, Archbishop Nelson J. Perez, during a press conference Jan. 23 at the Archdiocesan Pastoral Center, Philadelphia. (Photo by Sarah Webb).

Proclaiming his successor as “exactly the man our church needs,” Archbishop Charles J. Chaput introduced Archbishop-elect Nelson J. Perez, whom Pope Francis named as the next Archbishop of Philadelphia, at a Jan. 23 press conference in Philadelphia.

He will be installed as archbishop Feb. 18 at 2 p.m. in the Cathedral Basilica of SS. Peter and Paul.

The pope had announced the appointment while accepting the resignation of Archbishop Chaput, who last September turned 75, the customary age for retirement by Catholic bishops.

Anticipation for his successor had been building intensely in the archdiocese since that time, and judging by the applause in the room filled with more than 100 archdiocesan staff, it was a warm welcome home for Archbishop Perez, 58, currently the bishop of the Diocese of Cleveland.

He described his appointment as a “surreal moment” for a former priest of the archdiocese to be named its new shepherd. (Learn more about the archbishop-elect here.)

And at 58, he is the youngest archbishop since Cardinal John Krol arrived in Philadelphia in 1961 at age 50. 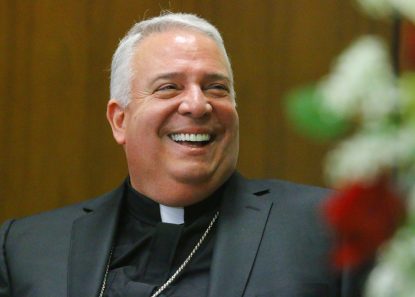 Archbishop-elect Nelson J. Perez is introduced Jan. 23 in Philadelphia as the next archbishop of Philadelphia following the appointment by Pope Francis. (Photo by Sarah Webb)

Cleveland and Philadelphia also share a renewed bond in that the new archbishop led that diocese and Cardinal Krol was an auxiliary bishop there before being appointed to Philadelphia.

Archbishop Perez was ordained a priest for the archdiocese in 1989 and one of his ordination classmates joined him at the press conference: Father Gary Pacitti, pastor of St. Basil the Great in Kimberton. Archbishop Perez referred to him not only as a friend but “like my brother.”

It was a sentiment that he extended to all his brother priests of the archdiocese and he would mention the strong priestly fellowship here several times during his remarks.

He said it is “awesome” to return Philadelphia with people who are faith-filled, who love the Lord, love the church. So I’m grateful to the Holy Father for placing this huge trust in me that I really don’t deserve.”

After studies at St. Charles Borromeo Seminary and his priestly ordination, then-Father Perez served at St. Ambrose Parish in Philadelphia, worked in ministry to Hispanic Catholics of the archdiocese and led two parishes, St. William in Philadelphia and St. Agnes in West Chester, before he was ordained an auxiliary bishop in the Diocese of Rockville Center, N.Y.

In 2017 he was named Bishop of Cleveland and at the press conference he praised the people of that diocese and especially its Catholic young adults who “were a great source of joy” for him. He added that he “hoped to reach out to the young adults here” in Philadelphia.

Archbishop Perez also singled out praise for Archbishop Chaput, whom he called a friend and mentor.

Acknowledging the challenges of the past eight years in Philadelphia ranging from parish and school closures to financial crises to a wounded morale for both clergy and laity due to the sexual abuse crisis, Archbishop Chaput confronted them “with great courage and steadfastness,” Archbishop Perez said. 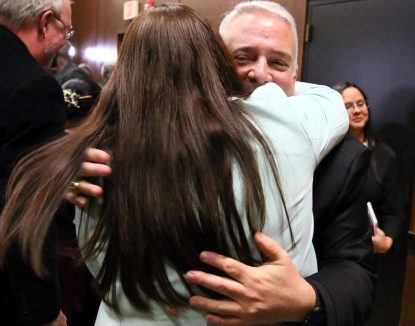 “I watched it from afar (and) learned from him, how steadfast he was and with profound faith that while things were tough, that God would make a way, that somehow, someway all things happen for the good of those who love God, as St. Paul said.”

Even in the midst of criticism, “I saw him make tough decisions, many times like a father. He made calls that today have placed the archdiocese in a way better place. We owe him a profound debt along with our gratitude (and) our love,” Archbishop Perez said, inviting everyone to applaud his predecessor.

After the installation Mass Archbishop Chaput will begin his retirement, and for the first three months he will have no public appointments as he takes up residence at St. Edmond’s Home for Children, an archdiocesan facility in Rosemont for children with intellectual and physical disabilities.

After that period, he said, he will assist Archbishop Perez as needed and accept some writing and speaking engagements.

In his remarks Archbishop Perez offered a special greeting in Spanish to the Hispanic Catholics of the archdiocese, encouraging them in “a missionary church, in the life of our community and in the truth of the Gospel,” he said.

He had previously served in diocesan-wide ministry to Latino Catholics in the 1990s and as pastor led two archdiocesan parishes with significant Hispanic populations.

He did not leave the clergy sexual abuse scandal unaddressed. “I and we continue to pray for your healing,” he said of victims abused by members of the church, “and we hold deep within our hearts those who have been hurt. It never should have happened, and we are sorry.”

Archbishop Perez appeared to describe his vision for the Archdiocese of Philadelphia as he cited the words of Pope Francis, calling for “a community of missionary disciples” that will be “ever vibrant and powerful in the church here in Philadelphia,” a community that “takes initiative” and is “engaged in the world around it, accompanies with the truth of the Gospel, is fruitful and is joyful.”

Acknowledging the challenges of the present and the future that he may face in Philadelphia, Archbishop Perez said he was not afraid to “do what needs to be done for the good of the family.”

Although the church has “gone through difficult moments in the last two decades, heart-wrenching moments … the church is still here because the church is Christ. We (members of the church) come and go. The mystical body of Christ, the Church, has to deal with us in our humanity, and we’re complex human beings. But God works through us. So I have great hope for the church, despite everything you read.”

He offered an encouragement to his listeners at the press conference and those watching it live streamed on the internet: “Never underestimate the power of the Holy Spirit working in you, through you, and despite you,” he said. 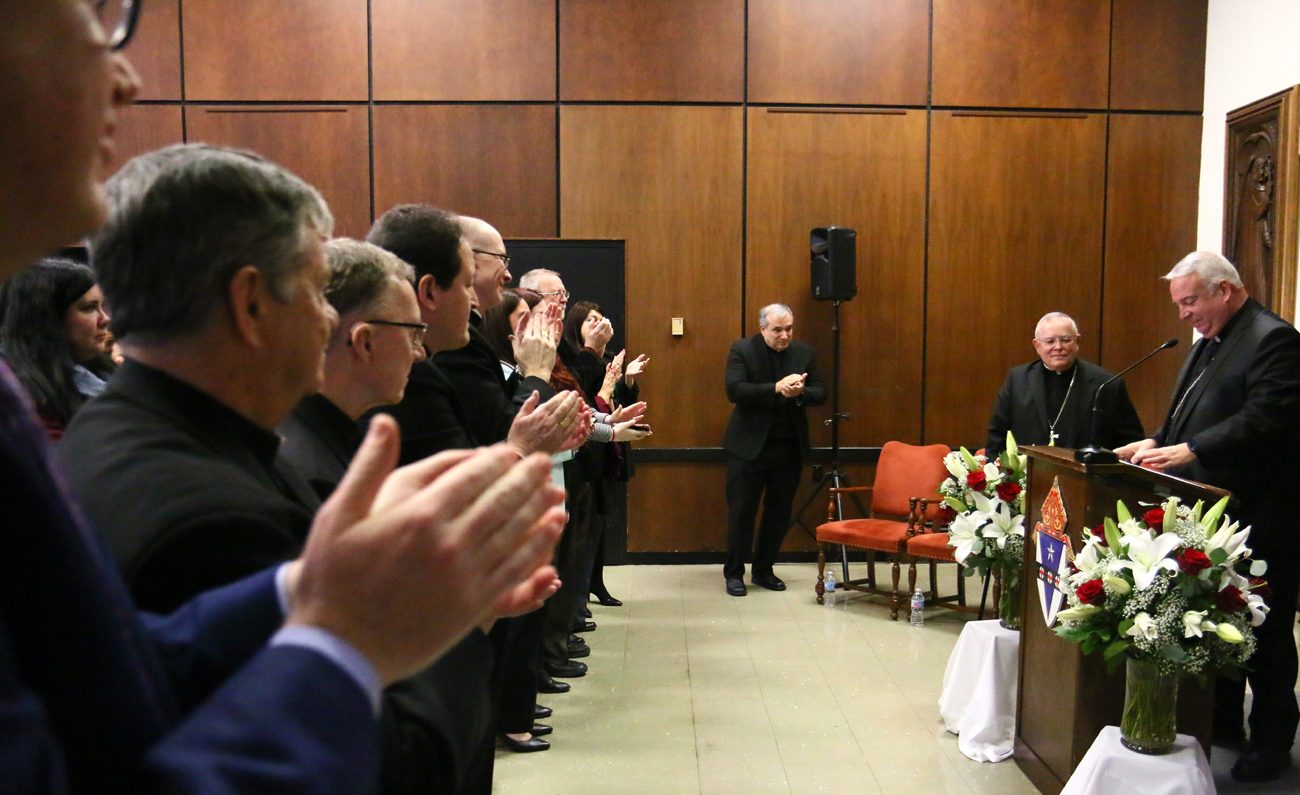 NEXT: Archbishop Chaput welcomes successor back to Philadelphia