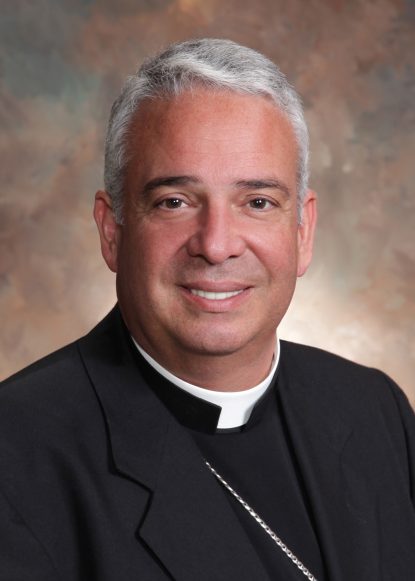 WASHINGTON (CNS) — Pope Francis has accepted the resignation of Archbishop Charles J. Chaput of Philadelphia and has appointed Bishop Nelson J. Perez of Cleveland as his successor.

Archbishop Chaput, who has headed the Philadelphia Archdiocese since 2011, turned 75 last September, the age at which canon law requires bishops to turn in their resignation to the pope.

The resignation and appointment were announced in Washington Jan. 23 by Archbishop Christophe Pierre, apostolic nuncio to the United States.

Archbishop-designate Perez will be installed as Archbishop of Philadelphia Tuesday, Feb. 18 at 2 p.m. at the Cathedral Basilica of SS. Peter and Paul.

He was born in Miami, Florida, on June 16, 1961 to David and Emma Perez and is the brother of the late Dr. David Perez and Louis Martin Perez. He was raised in West New York, N.J. and earned a Bachelor of Arts degree in psychology from Montclair State University in 1983.

After entering St. Charles Borromeo Seminary in Wynnewood, he earned Master of Divinity and Master of Arts in theology degrees in 1988 and 1989, respectively. He was ordained a priest for Philadelphia on May 20, 1989.

Named a monsignor by Pope John Paul II in 1998 and a prelate of honor by Pope Benedict XVI in 2009, he was ordained an auxiliary bishop for the Diocese of Rockville Centre, N.Y., in 2012.

Archbishop-designate Perez was installed as the 11th bishop of the Diocese of Cleveland on Sept. 5, 2017.

He currently serves as a member of the Administrative and the Religious Liberty Committees for the USCCB. In November 2018, he began a three-year term as the bishop liaison for the National Federation for Catholic Youth Ministry (NFCYM).

NEXT: Philadelphia welcomes home a son as new archbishop