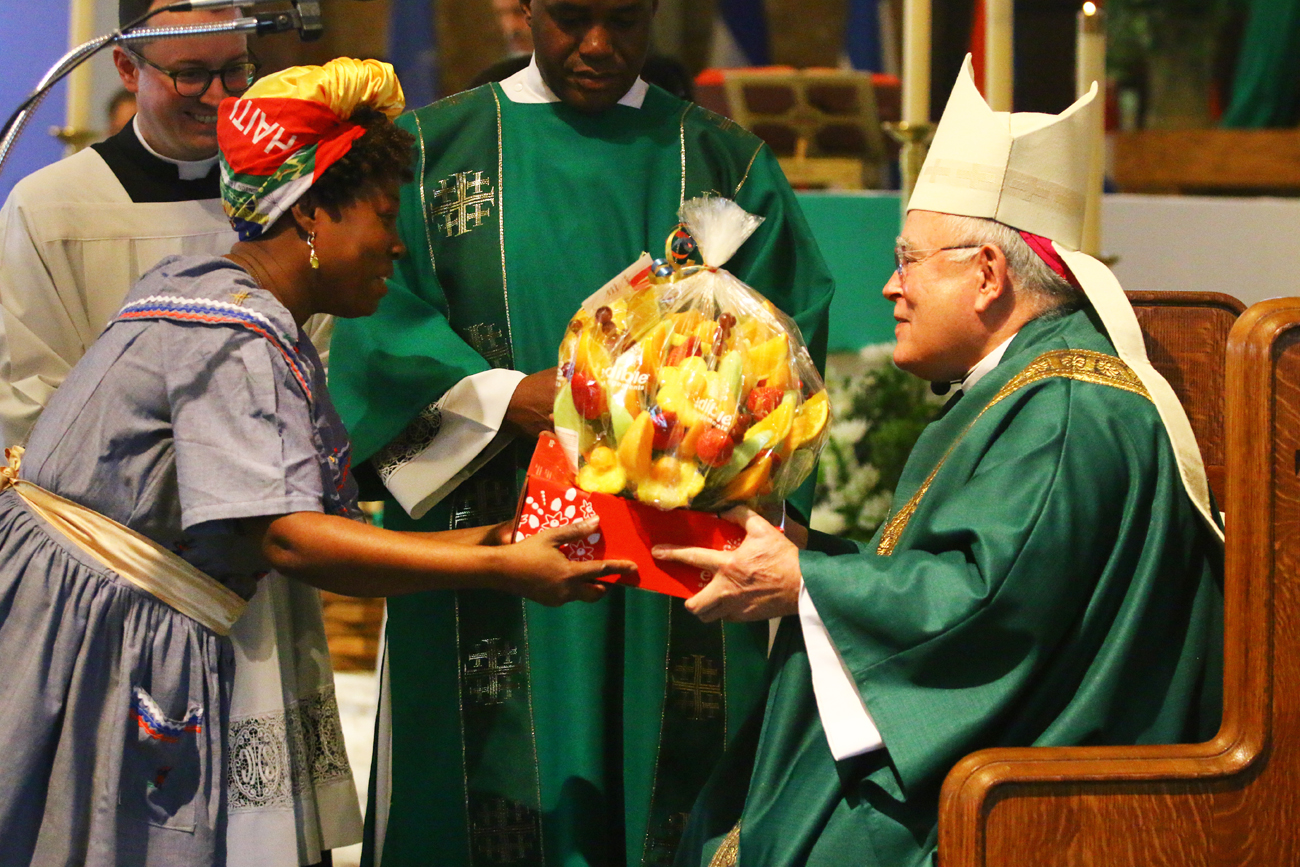 Archbishop Charles Chaput accepts fruit as part of the offertory gifts as he celebrates the 100th anniversary Mass for St. William Parish, Philadelphia, on Sunday, Jan. 19. (Photo by Sarah Webb)

St. William Parish, in the Lawncrest section of Philadelphia where Archbishop Charles Chaput celebrated a 100th anniversary Mass on Sunday, Jan. 19, had very modest beginnings in 1920.

Established in territory taken from Presentation B.V.M. in Cheltenham, the new parish did not yet have many Catholics, just 70 families, according to history compiled by parishioner and Music Director Ken Houser.

Archbishop Dennis Dougherty gave the founding pastor, Father William Motley, the option of turning down the appointment, which may well explain why it is the only parish in the diocese ever dedicated to St. William.

Many of the earliest parishioners were of German heritage and in fact the first Masses were celebrated at the local Germania Maennerchor Hall.

Typical of the Cardinal Dougherty era, the first parish building was a combination school/chapel building. Construction began the following year and the first floor was immediately put to use as a worship site on Sunday and school the rest of the week.

The school was conducted by the Sisters Servants of the Immaculate Heart of Mary for about 100 children. In that very first class, since only the chapel was complete, the children used pews for their desks and sat on the kneelers, according to parish lore. 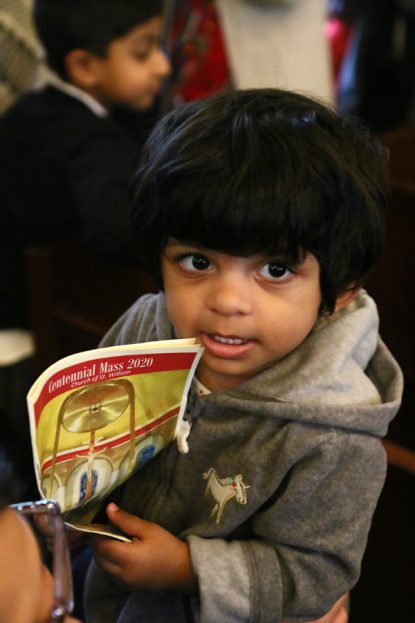 Although the population of the parish grew rapidly in numbers, construction of a permanent church was delayed by the Great Depression, followed by World War II, which saw 317 young men of the parish in uniform, with 12 losing their life.

The St. William Church of today was not completed until 1963 under the administration of Father William Boyle, St. William’s longest serving pastor (1944-1968).

Other distinguished pastors included Msgr. James Mortimer (1980-2002) and then-Msgr. Nelson Perez (2002-2009), who served during a key period when St. William was becoming much more multiethnic. He was consecrated bishop in 2012 and is currently the Bishop of Cleveland. He was succeeded at St. William by Father Joseph Watson and, since 2016, Father Alfonso Concha.

But time has not been kind to St. William School. Because of rising tuition costs the population dwindled to 240 when it closed in 2012. Now most parishioners who choose Catholic schools send their children to St. Cecilia in nearby Fox Chase.

Paradoxically, as a parish even without a school, St. William remains one of the most vibrant in the City of Philadelphia, mostly because it has adapted well to change.

As older families left for the suburbs the parish embraced the newcomers and it still attracts almost 1,300 worshipers each weekend, with eight Masses in English, Spanish, Creole and Urdu (Pakistani), which draw people from around the archdiocese.

“Our people are dedicated,” Father Concha said. “Many of the people who move still come back especially for special Masses. We have strong baptism (numbers), well above funerals, and many ministries with people (involved).”

With that said, the parish also has many parishioners who are up in years, and most Masses are in the lower church, which has no steps and is handicapped-accessible. But of course the jubilee Mass was celebrated in the magnificent upper church.

St. William does go out of its way to meet the people where they are, with many people from outside the parish boundaries coming for the Masses in their native language.

“We also have an 8 p.m. Mass on Sunday, which is one of the latest in the diocese,” Father Concha said. 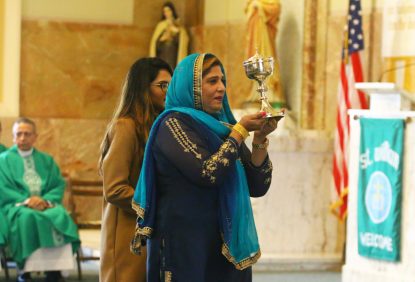 Larry Petrone has been a parishioner for the past 50 years, and he and his wife Eileen raised three kids in St. William. He praises the excellent music programs that involved so many of the young people in the parish and points to the 24-hour eucharistic adoration chapel among the many renovations done through the parish’s Hammer and Nail Club.

But especially he cites the succession of good pastors who helped with the transition from a parish of largely German, Irish and Italian extraction to one that is truly multicultural.

Kathy McDonough, a lifetime parishioner who attended St. William School and later taught at it, calls the parish “the beating heart of Lawndale.”

“St. William School was a wonderful place to teach,” she said. “When I was there, we still had Immaculate Heart Sisters as principal and vice principal. I give a lot of credit to Msgr. Mortimer for helping with the transition of the parish to what it is today.”

Of course the anniversary celebration really began a year ago, and many of those who made St. William what it is today, including Bishop Perez, came back for the opening Mass.

“The church was packed for that,” Father Concha said.

The same could be said for the Jan. 19 anniversary Mass in which St. William’s hosted more than 900 in its upper church while another 100 watched live video in the lower church.

Hymns and prayers during the Mass reflected all the languages and cultures of St. William’s faithful, past and present, and the flags of 20 nations, representing parishioners’ countries of origin, adorned the sanctuary.

One special song to which parishioners could relate was the recessional hymn, “Hymn to St. William,” composed in part by the late Msgr. Mortimer.

The cultural diversity of St. William made an impression on Archbishop Chaput, who in his homily noted the parish “has many different ethnic groups who altogether are brothers and sisters in Christ. And for that to take place in a meaningful way is very, very important.

“We pray that St. William will be a great example of grace and unity for the whole archdiocese.” 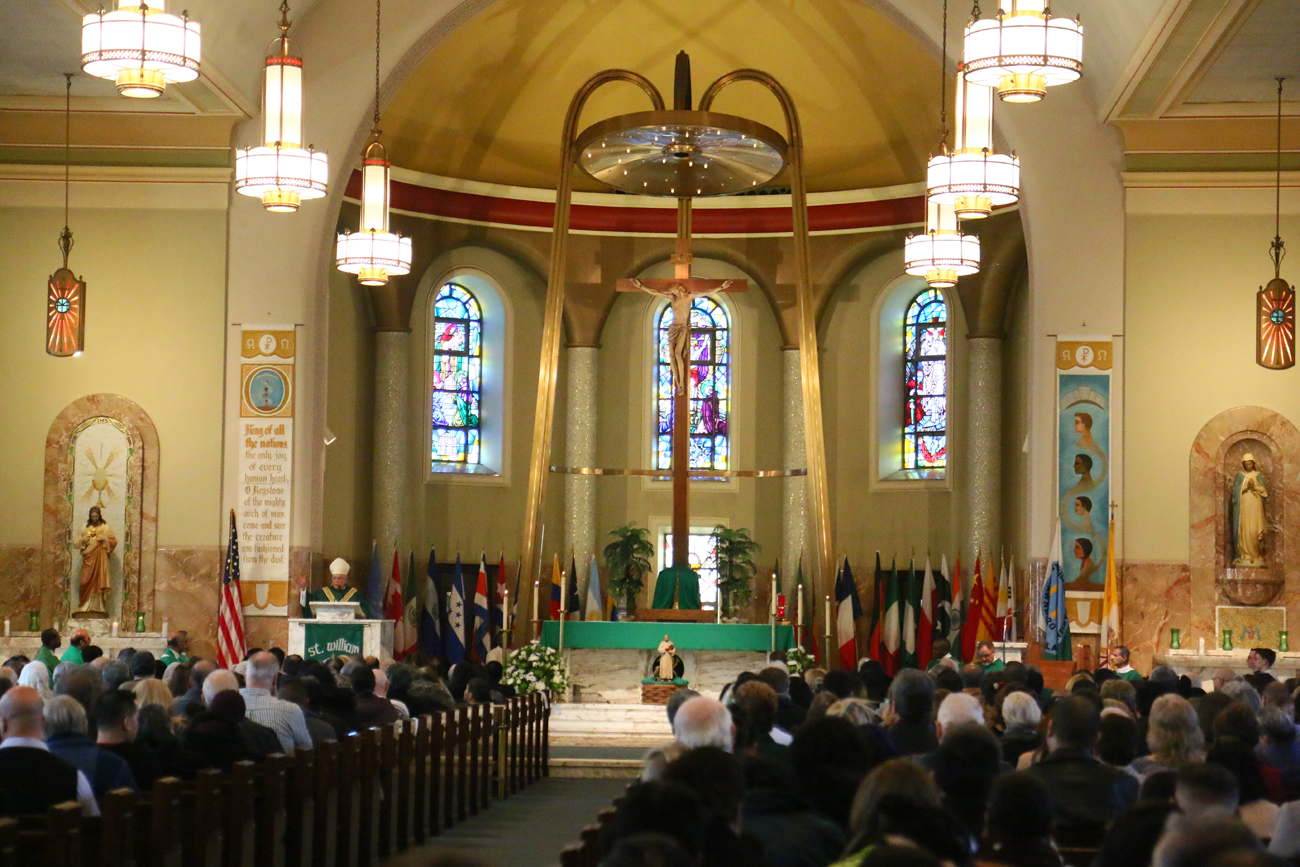