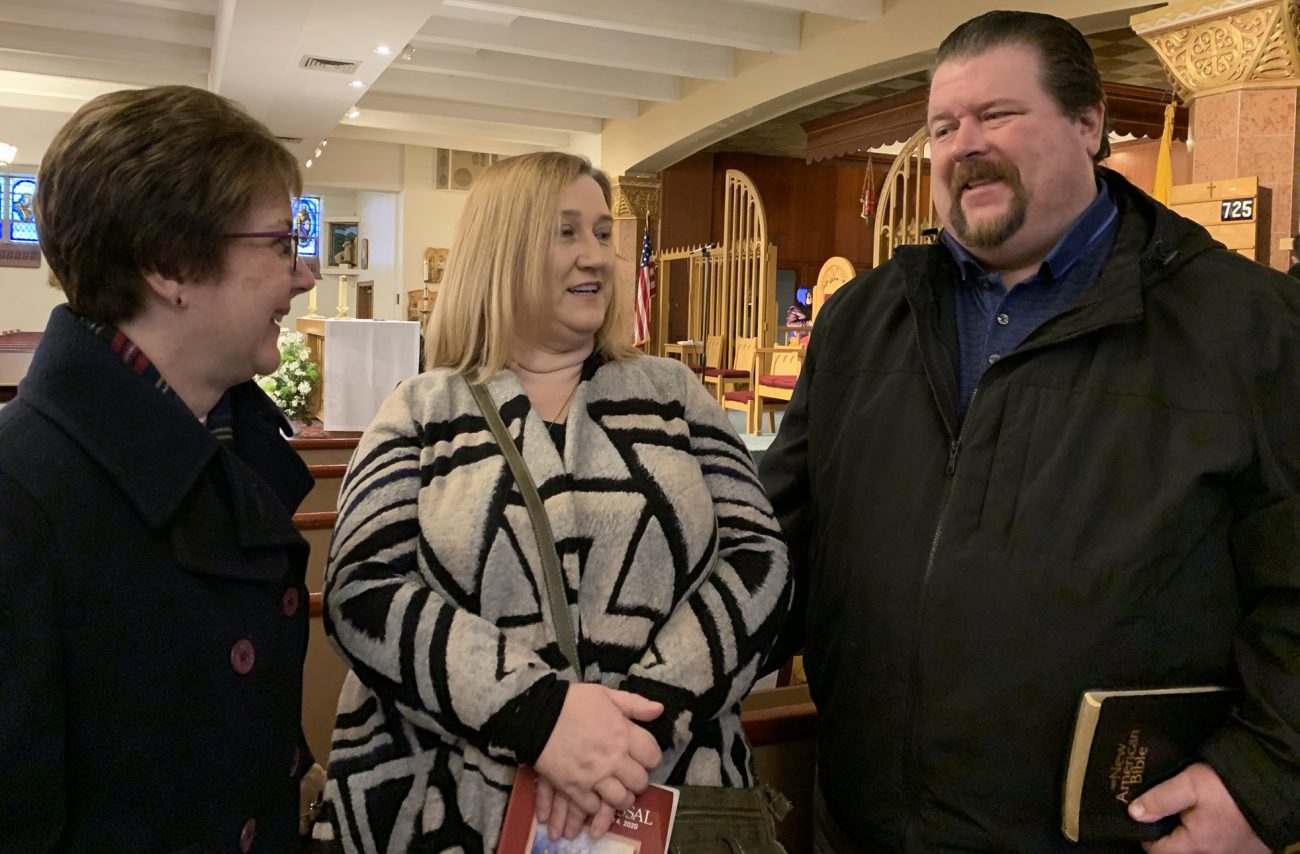 That’s according to Julie Kurdziel of St. William Parish in Northeast Philadelphia, where then-Msgr. Perez served as pastor from 2002 to 2009.

“Philadelphia’s in great hands,” she said, speaking after Mass on the first Sunday since Archbishop Charles J. Chaput presented his successor at a Jan. 23 press conference. Archbishop Perez will be installed at a 2 p.m. Mass on Feb. 18 in the Cathedral Basilica of SS. Peter and Paul, where he was ordained a priest in 1989.

Kurdziel, a member of St. William for 58 years, described Archbishop Perez as “a real, genuine man” who could often be found praying in the parish’s perpetual adoration chapel.

Ronald Pleis, another longtime parishioner, said that he had “never met a man who was more at peace with himself.”

Like many at St. William, Pleis still recalled the first words the former pastor addressed to his congregation in 2002.

“He said, ‘This church was here before I came, and it will be here after I leave,’” Pleis recounted.

The former pastor was “all-inclusive,” said Pleis, regardless of parishioners’ level of involvement.

“It didn’t matter if you put all your effort into the offering plate or if you had nothing; he treated you the same way,” Pleis said.

As the surrounding neighborhood and the parish makeup became increasingly diverse, then-Msgr. Perez found a way to “involve everybody” in parish projects and events, said Pleis’s wife, Christine. 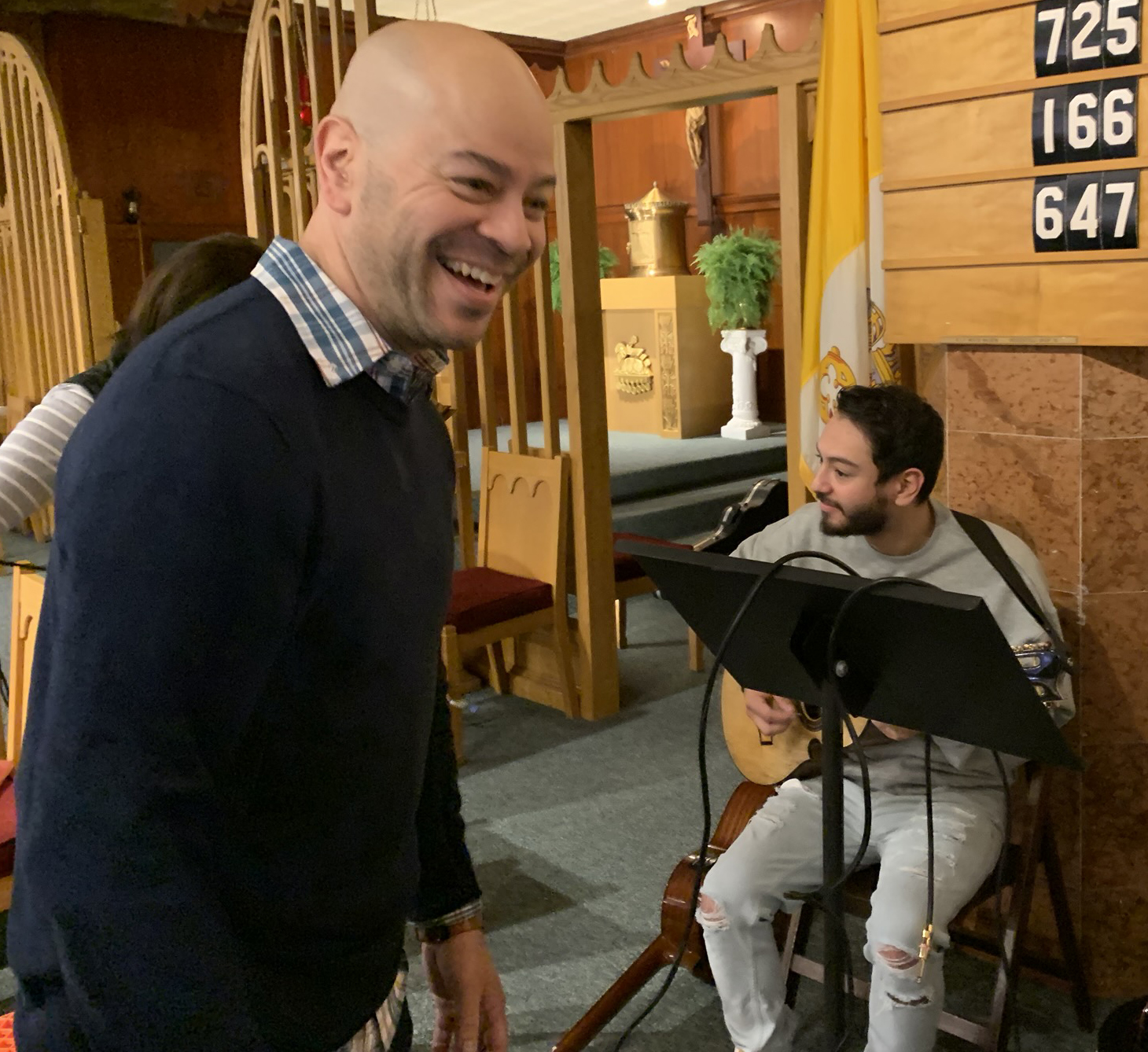 Michael Flores, preparing for a Jan. 26 Mass with his son Cristian, said Archbishop-elect Nelson J. Perez has always seen youth as “instruments in society … to bring others to church.” (Gina Christian)

The former pastor was even known to travel off-site to share meals with his flock.

“Sometimes he came to your house,” said Kurdziel. “He loved to eat and have fellowship with us.”

In particular, he had a heart for the parish youth, said Christine Pleis, noting that he often visited the parish’s former school and the Boy Scout and Girl Scout troops that regularly met at St. William.

When the Pleis’s son Kyle worked on his Eagle Scout project in the parish’s lower church, “Msgr. Perez was in here every day eating with them,” she said.

Michael Flores — who with his wife Abigail Negron has known “Padre Nelson” since his ordination — said that the new Archbishop has always seen youth as natural evangelizers.

“He said that the church needed instruments, and I don’t mean the guitars and flutes that my kids play, but instruments in society to capture them, to lift them, to bring them to church,” said Flores.

The warmth and wisdom of the former pastor will serve him well in his new role, said St. William music director Kenneth Houser, whom then-Msgr. Perez hired in 2003.

“His leadership will continue to inspire Philadelphia Catholics to welcome the stranger, clothe the naked and feed the poor, literally and spiritually,” said Houser, a lifelong parishioner.

Kathy McDonough, who also once worked for the new Archbishop, agreed.

“It was a privilege to call him my boss,” said McDonough, both a lifelong parishioner and a former teacher at St. William School. “I am just so proud to be able to call him a friend.”

PREVIOUS: March for Life can open wounds for some women