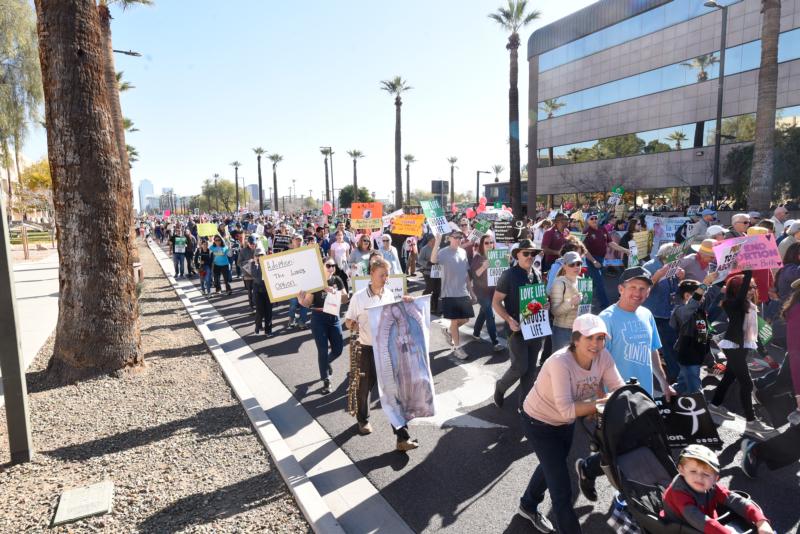 PHOENIX (CNS) — They came by the busload from across Arizona to send a message to lawmakers and the world: Abortion is a grave injustice, and they stand ready to love and assist women in crisis pregnancies.

Not only that — speakers at the Jan. 18 event said they want to help abortion workers leave the industry and join the movement to safeguard life.

Conversion ought to be the goal of the pro-life movement, said keynote speaker Abby Johnson. The one-time director of a Planned Parenthood facility worked for the abortion giant until the day she was asked to assist with an abortion and quit. Her story was the subject of the 2019 movie “Unplanned.”

Phoenix police blocked off traffic for a good mile-and-a-half on the march route to the Arizona State Capitol grounds — as thousands of pro-lifers bearing signs, banners and red roses marched past city hall, with chanting and cheers rippling through the crowd.

They pushed wheelchairs and strollers, tugged wagons with small children and stood about 20 abreast as groups of teens and young adults, grandparents, Knights of Columbus and soccer moms paraded down the street. Organizers said it was the largest March for Life they’d ever recorded. Phoenix police estimated the crowd to number 7,000 to 10,000.

The Arizona March for Life was one of about 60 statewide pro-life marches held throughout January to mark the 47th anniversary of the Supreme Court’s 1973 Roe v. Wade and Doe v. Bolton decisions legalizing abortion on demand nationwide. The national March for Life on the Mall in Washington Jan. 24 drew more than 100,000 participants.

According to the March for Life website, marchforlife.org, at least six more statewide marches are scheduled to take place in February and March. Connecticut and Pennsylvania pro-lifers have planned their marches for April 15 and May 18, respectively.

In Phoenix, local sports radio personality Doug Franz got the throng revved up as the event got underway, relating the story of his daughter’s premature birth. Franz’s wife went into labor at 21 weeks — barely halfway through the pregnancy — and seven of the 10 physicians who treated her recommended abortion.

“We didn’t listen,” Franz said. His daughter, Vienna, turned 20 the day of the rally and Franz had the crowd sing “Happy Birthday” to her. “I want you to sing so loud, Washington hears you,” Franz said. “This is an example of a child that doctors said shouldn’t be here, and now she is.”

As the thousands of attendees filled in Wesley Bolin Memorial Plaza in front of the Capitol complex to listen to an array of speakers — some of them giving their remarks in both English and Spanish — they were flanked by a wall bedecked with red roses — 12,438 of them, to be exact.

That was the number Elisa Medina, executive director of Hands of Hope Tucson, pointed to during her time on stage. The myriad roses, she said, “represent the 12,438 little boys and girls” who died from abortion in Arizona in 2018. It’s difficult to fathom the millions who perish from abortion each year, but “we can help 12,438 kiddos — we can do that,” Medina noted.

Phoenix Bishop Thomas J. Olmsted led the crowd in a prayer that drew on rich scriptural references including Jeremiah, Zechariah and Mary. “We are here to show our gratitude to God for every life,” the bishop said. “We firmly believe every single person has dignity — not for what they do, but for who they are.”

Andrea Friedman, director of Voice for the Voiceless, also spoke onstage, noting that “as young women, we were taught to fear pregnancy. Society has pitted us against our children.” She challenged the crowd to stand up and defend women in unplanned pregnancies. “Be her advocate not just for the next nine months, but for the next 90 years,” Friedman urged.

Arizona Gov. Doug Ducey drew applause with his statement that “every human being has an intrinsic right to life” and that “in Arizona, we are again proud to be the most pro-life state in the country.” He promised to move forward with increased funding for more adoptions and to “help keep families together.”

Mayra Rodriguez, a former Planned Parenthood employee who left the abortion business after years of people praying for her, spoke of the Divine Mercy pamphlet Father Don Kline left on her car one day. “I’m standing here because of all your prayers,” she said. “It took 17 years for me to walk out of there, but I did.”

Those were words that brought Johnson to tears.

“If it’s just about one baby, it’s transactional … we in the pro-life movement are transformational.” No one, Johnson added, walks into an abortion clinic excited to be there. “They walk in because they have no options.”

Planned Parenthood, Johnson said, is going to “put $45 million toward electing radical, pro-abortion candidates” in the upcoming presidential election, but the Susan B. Anthony List, which supports pro-life politicians “got $52 million. And we are no longer going to be bullied by organizations like Planned Parenthood.”

One of the earliest pro-life marches of 2020 took place across the country in Charlotte, North Carolina. Father Cory Catron, parochial vicar of St. Vincent de Paul Church in Charlotte, delivered the keynote address.

“We march because to march is to walk in step with the heartbeat that is the love of God made manifest in our world, crying out to us with each beat of His wounded heart to continue our march, aided by his grace and emboldened in virtue,” Father Catron preached Jan. 10.

“We march for the restoration of a just society that respects and protects the most vulnerable. We march for the conversion of those who misuse their gifts of the healing arts towards using them to be a blessing in the world,” the priest said.

Another early march of the new year was held in Denver Jan. 11. There the focus of pro-lifers was ending late-term abortion in Colorado through Initiative 120 if supporters can get it on the ballot in November. It would end Abortion in Colorado at 20 weeks.

PREVIOUS: Knights of Columbus unveils initiation ceremony that will be public