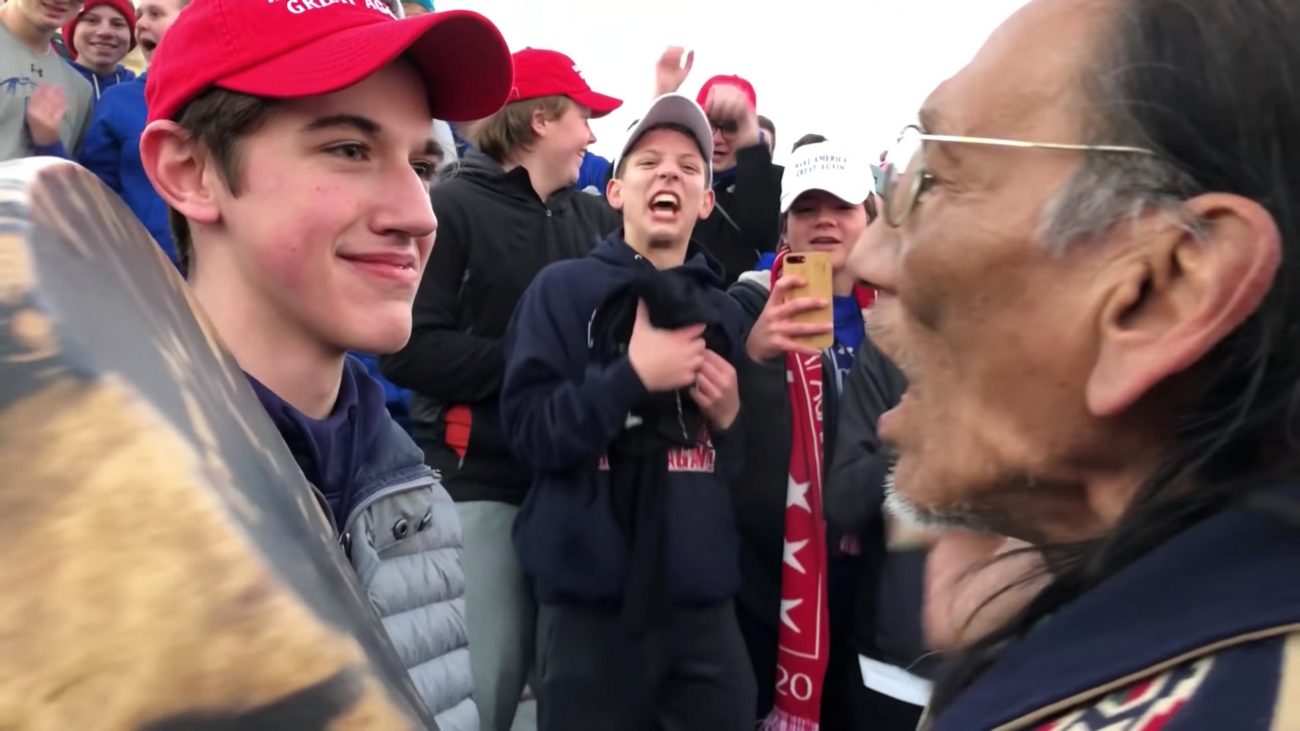 Nick Sandmann, a junior at the time at Covington Catholic High School in Park Hills, Ky., and other students from the school stand in front of Native American Nathan Phillips near the Lincoln Memorial in Washington in this still image from video Jan. 18, 2019. CNN has reached a settlement with Sandmann, who had sued the news outlet saying it defamed him.(CNS photo/Kaya Taitano, social media via Reuters)

WASHINGTON (CNS) — CNN reached an undisclosed settlement Jan. 7 with Nick Sandmann, a Kentucky Catholic high school student who sued the cable news outlet for defamation over its coverage of an incident that occurred after last year’s March for Life.

Sandmann, a junior last year who was at the center of the viral video controversy, sought $275 million in damages in his lawsuit filed against CNN last March. He has also sued The Washington Post and NBC Universal. A federal judge let part of the suit against The Post continue after the paper filed a motion to dismiss it. Trial dates have not yet been set for these two cases.

The amount of the CNN settlement was not made public during a hearing at the federal courthouse in Covington, Kentucky.

After the announcement, Sandmann tweeted: “Yes, We settled with CNN,” which gained more than 82,000 likes by the next day and hundreds of comments, primarily of support.

Sandmann sued media outlets for what he claimed was biased coverage of what transpired at the Lincoln Memorial Jan. 18, 2019. That day, Sandmann, wearing a “Make America Great Again” hat, smiled just inches away from Nathan Phillips, a Native American leader, as Phillips chanted and beat a drum.

The day after that encounter, clips from a video of that encounter went viral almost immediately, which showed students surrounding Phillips while appearing to be mocking him. The clip caused immediate outrage, particularly on social media. But by the next day, extended footage of how the situation unfolded revealed that another group had taunted the students and some responded back. Phillips said he had walked over to the students and the group as an intervention.

The conclusion of that report, released by the Covington Diocese Feb. 13, 2019, found no evidence that the students had issued “offensive or racist statements” that they had been accused of doing.

In a letter to parents of Covington Catholic High School last year, Bishop Roger J. Foys of Covington said his hope that the investigation would “exonerate our students so that they can move forward with their lives has been realized.”

NEXT: Filipinos celebrate their faith in Santo Nino festival season