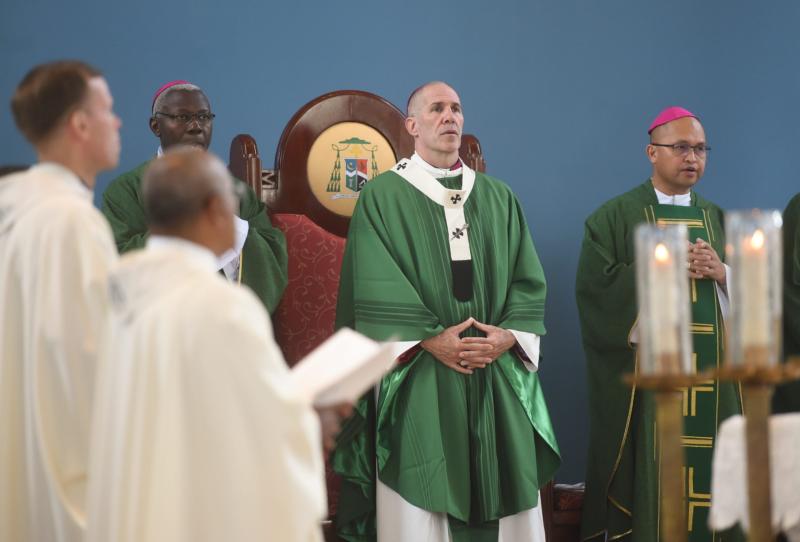 The Guam prelate was among 30 newly named archbishops from throughout the world who traveled to Rome to concelebrate the Mass, with Pope Francis presiding. The pope blessed the palliums, which were then to be conferred on the archbishops in their respective dioceses.

The lamb’s wool pallium is the stole that signifies the shepherd’s mission. The 3-inch-wide band is worn around the neck and shoulders over Mass vestments and symbolizes an archbishop’s unity with the pope and his authority and responsibility to care for the flock the pope entrusted to him.

Archbishop Byrnes was an auxiliary bishop of Detroit when Pope Francis sent him to Guam in October 2016 as the coadjutor bishop with special powers in the midst of accusations of sexual abuse and financial mismanagement against Guam Archbishop Anthony Apuron.

The former Archbishop Apuron was later found guilty of abuse against minors by the Vatican’s Congregation for the Doctrine of the Faith. On April 4, 2019, the congregation rejected his appeal and upheld its guilty judgment — and fully affirmed Archbishop Byrnes’ leadership as the shepherd of the Catholic faithful on Guam and the metropolitan archbishop of Agana.

In an address to the packed cathedral in Hagatna Jan. 19, Archbishop Byrnes struck a tone of positivity and a bright future for the archdiocese. “We need new beginnings as a community,” he said.

“I’m just so happy we finally will have a permanent archbishop,” Marilou Martinez told the Pacific Daily News after the Mass at Guam’s cathedral. “I just had to come here, I had to make it. … it’s historic.”

In an interview in Rome when he received the pallium from Pope Francis, Archbishop Byrnes told Catholic News Service that when he arrived in the Guam archdiocese in 2016, protesters had been gathering outside the cathedral before every Mass the former archbishop celebrated.

To celebrate his first Mass there, Archbishop Byrnes had to cross the picket line.

“I didn’t pick up a sign myself, but I understood,” he said. “But after a few months, they laid down their picket signs and walked into the church for Mass. These are faithful people.”

Archbishop Byrnes said he believes Catholics in Guam are starting to “sense that the church is starting to act more and more like the church.”

NEXT: Sorrow, support for U.S. firefighters killed in Australia