Love of baking and prayer make religious brother a winner 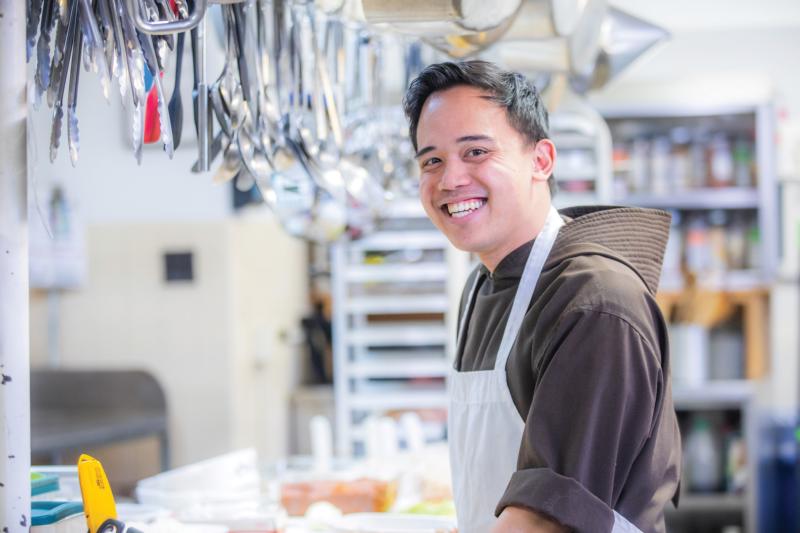 Capuchin Franciscan Brother Andrew Corriente poses for a photo in the kitchen at his friary in Washington Jan. 9, 2020. The 31-year-old third-year seminarian was the winner of the fifth season of ABC's "The Great American Baking Show: Holiday Edition," where he was recognized as one of the nation's best amateur bakers. (CNS photo/Andrew Biraj, Catholic Standard)

A quick test with a toothpick tells him the cake needs about five more minutes in the oven, more than enough time for him to soften the butter that will eventually become the buttercream icing that will top the confection.

The enticing aromas in the kitchen at Capuchin College in Washington signal that Brother Andrew is busy creating another treat for the men who call the friary home.

Brother Andrew knows his way around a kitchen. In fact, he was crowned this year’s baking champion on ABC’s “The Great American Baking Show: Holiday Edition.” The program, which aired during the month of December and concluded Jan. 2, is an adaptation of the wildly popular “Great British Bake Off.”

Brother Andrew said he wanted to participate in the program “because I love to bake, and I wanted to learn from the others” who were part of the production. “They were very good, incredible cooks,” the brother said of his competition. Several of them have since become good friends of his.

“The Great American Baking Show: Holiday Edition,” now in its fifth season, features 10 amateur bakers who compete in a series of challenges in which they must produce outstanding baked goods. Contestants are eliminated one by one until a champion is selected.

Brother Andrew emerged as the victor after he and the other two finalists were charged with making three individual party desserts of their choice. He earned the crown with chocolate cookies with lime cream and blackberry jam, sponge cakes with fresh cream and fruits, and a puff pastry. 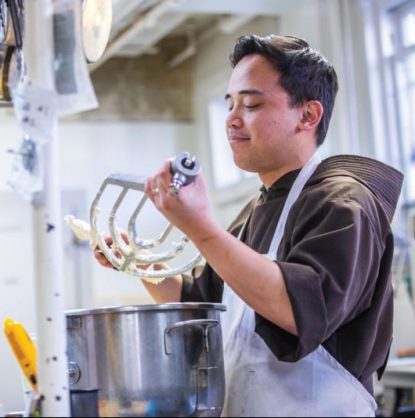 Capuchin Franciscan Brother Andrew Corriente prepares a buttercream icing in the kitchen at his friary in Washington Jan. 9, 2020. The 31-year-old third-year seminarian was the winner of the fifth season of ABC’s “The Great American Baking Show: Holiday Edition,” where he was recognized as one of the nation’s best amateur bakers. (CNS photo/Andrew Biraj, Catholic Standard)

Brother Andrew was given the nod to appear on the show last June, but he applied for the program in 2017.

“In 2018, they (producers of the show) called me, but I said no because I was taking my final vows,” he told the Catholic Standard, newspaper of the Archdiocese of Washington. “They called me again this year, and I did it.”

He said he spent the month of July “recipe developing and recipe testing” before traveling to London in August, where the entire season was taped over the course of that month. “Filming sometimes took up to 14 hours a day,” Brother Andrew said. “I had to stay focused so that I could get my prayers in, Mass in and meditation in.”

Although it was very hot in the kitchen where the contestants competed, Brother Andrew chose to wear his distinctive brown Capuchin robes as he baked.

The friary where Brother Andrew regularly creates his bakery masterpieces is part of the St. Augustine Province of the Order of Friars Minor. The 30 men who live at Capuchin College are either studying nearby at The Catholic University of America, preparing for the priesthood, serving in various ministries throughout the Archdiocese of Washington or are retired.

“Brother Andrew wanted to be on the show as a witness. He went to evangelize and put before the world the Gospel and our order,” Father Dressler said.

Capuchin Father Tom Betz, the provincial of the St. Augustine Province, gave the nod and Brother Andrew was on his way.

He added that it is not unusual for a religious to be familiar in the kitchen. “Religious life has long been a source of nourishment,” Father Dressler said. He also pointed to the ancient tradition of monks brewing beer, making wine and even giving coffee lovers everywhere the eponymous cappuccino.

“It is connected to the fact that all good things come from God,” Father Dressler said.

In episode four of “The Great American Baking Show: Holiday Edition,” Brother Andrew struggled with the challenge of creating a cheesecake tower with at least three tiers, with two of one flavor and one of a different flavor. As he struggled to construct his tower, Brother Andrew stopped, lifted his hands in prayer and uttered the word, “surrender.”

Brother Andrew is a third-year seminarian. After studying filmmaking in college, the now 31-year-old native of California, “had a desk job in the entertainment industry,” working for a talent agent.

“I was searching for other jobs, but never thought about religious life,” he said. “A friend of mine from college became a nun, and when I went to see her profess her vows, I met a Capuchin.” That spurred Brother Andrew to give the order a try. “I met the guys, and the rest is history,” he said.

Brother Andrew regularly bakes for the residents of the friary and one of his specialties is “kouign amann,” a French pastry made with multiple layers of buttery croissant pastry caramelized with slightly burnt sugar.

Baking, he said, “is in a way eucharistic.”

“Jesus gave us himself in the bread and wine,” Brother Andrew said. “For me, I put myself out there with my cooking. It is kind of a sacrificial love.”

His interest in baking, he added, was spurred during his postulancy.

Brother Andrew said he finds time for prayer as he cooks. For example, in preparing meringue — a confection made of whipped egg whites and sugar — he discovered “the best way to time my stirring is by praying the Hail Mary.”

The “guys,” as Brother Andrew calls his fellow Capuchins, sent their favorite baker off to compete in London with “a really nice blessing and prayer.” Brother Andrew’s family — mother Elna, father Rodel and sister Theresa — flew to London to watch the finale.

When he won, Brother Andrew was sworn to secrecy; for more than four months he was not allowed to tell others that he had won.

The residents of the friary would gather each week to watch the show together, cheering their brother on. Father Dressler said it was akin to watching the Super Bowl. The friary, he said, exploded with whoops and shouts and cheers when Brother Andrew was named the winner.

In addition to his baking, Brother Andrew uses his culinary skills to help the less fortunate and the working poor. He and a group of brothers and lay volunteers cook and serve dinner every Sunday for the day laborers who congregate at a local Home Depot looking for work.

After he is ordained to the priesthood in two years, Brother Andrew is unsure whether his priestly vocation will permit him as much time to pursue his baking avocation. “God has already zigzagged my life in so many ways that I am open to anywhere he leads me,” he said. 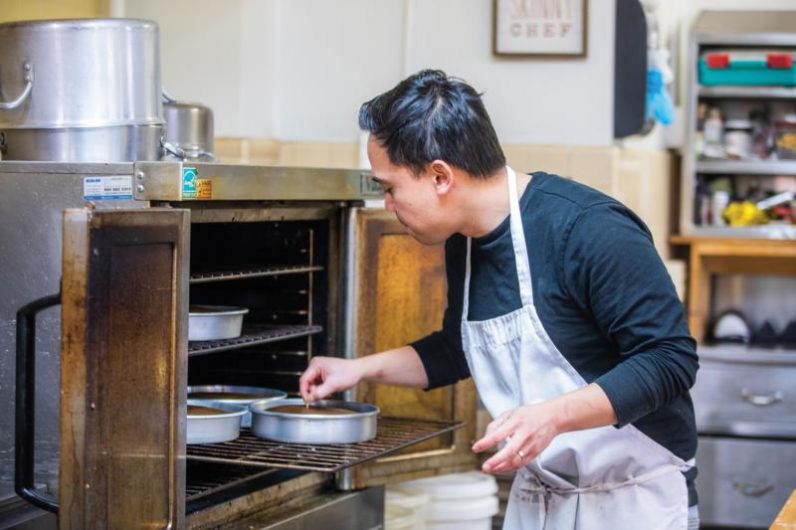 Capuchin Franciscan Brother Andrew Corriente inspects a cake that he’s baking at his friary in Washington Jan. 9, 2020. The 31-year-old third-year seminarian was the winner of the fifth season of ABC’s “The Great American Baking Show: Holiday Edition,” where he was recognized as one of the nation’s best amateur bakers. (CNS photo/Andrew Biraj, Catholic Standard)