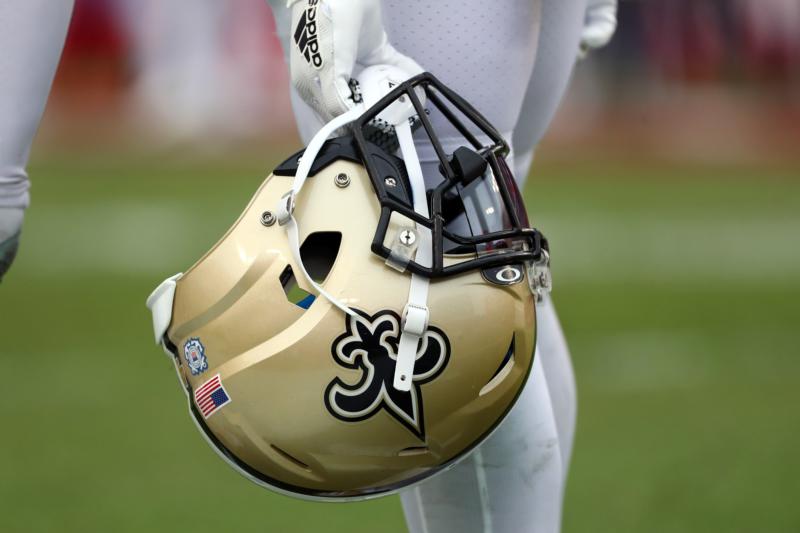 A New Orleans Saints player is seen holding his helmet during the second half of a game in 2019. In a Jan. 24, 2020, story, The Associated Press claimed the Saints' owner, a devout Catholic, has aided the New Orleans Archdiocese in trying to shield emails related to the sex abuse crisis. The archdiocese in a statement called the story false, saying its only advice on the matter was to "be direct, open and fully transparent." (CNS photo/Kim Klement-USA TODAY Sports via Reuters)

NEW ORLEANS (CNS) — The New Orleans Saints said in a Jan. 24 statement that the football team has “no interest in concealing information from the press or public” in any matter related to clergy sex abuse.

The Saints organization remains “steadfast in support” of sex abuse victims and prays “for their continued healing.”

The statement was released in response to an AP story Jan. 24 that said the NFL team allegedly helped the New Orleans Archdiocese with public relations damage control on sex abuse claims.

“Attorneys for about two dozen men suing the church say in court filings that the 276 documents they obtained through discovery show that the NFL team, whose owner is devoutly Catholic, aided the Archdiocese of New Orleans in its ‘pattern and practice of concealing its crimes,'” AP reported.

Lawyers for the Saints called such claims “outrageous” in court papers. The NFL team is going to court to keep the public from seeing hundreds of emails on the issue that its lawyers said were meant to be private correspondence.

“While there is current litigation relative to the New Orleans Archdiocese and clergy sex abuse, our comments are limited only to the scope of our involvement,” the New Orleans Saints said in its Jan. 24 statement.

“The New Orleans Saints organization has always had a very strong relationship with the archdiocese,” it said. “The archdiocese reached out to a number of community and civic-minded leaders seeking counsel on handling the pending media attention that would come with the release of the clergy names in November of 2018.”

In reaching out, the archdiocese contacted Greg Bensel, senior vice president of communications for the New Orleans Saints, who “offered input on how to work with the media.”

“The advice was simple and never wavering: Be direct, open and fully transparent, while making sure that all law enforcement agencies were alerted,” the Saints said.

“The New Orleans Saints, Greg Bensel and Mrs. Gayle Benson were and remain offended, disappointed and repulsed by the actions of certain past clergy,” the team’s statement added, referring to the wife of New Orleans Saints owner Tom Benson. The Bensons are devout Catholics.

“The Saints have no interest in concealing information from the press or public,” it said. “At the current discovery stage in the case of Doe v. Archdiocese, the Saints, through their counsel, have merely requested the court to apply the normal rules of civil discovery to the documents that the Saints produced and delivered to Mr. Doe’s counsel.”

“We remain steadfast in support of the victims who have suffered and pray for their continued healing,” the New Orleans Saints said.