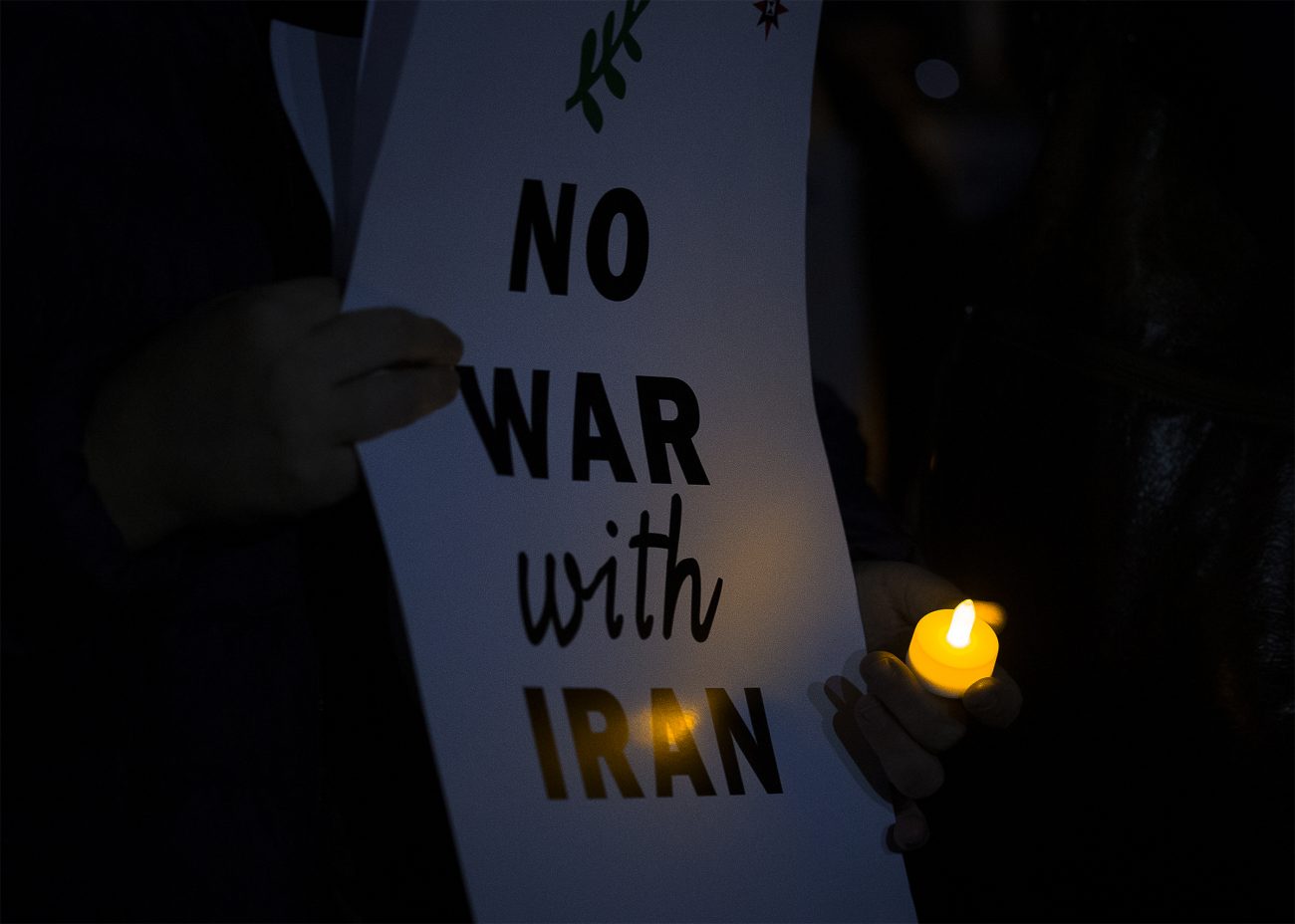 A participant in a candlelight vigil Jan. 6 near the White House in Washington holds a sign calling for peaceful solutions to rising tensions between the United States and Iran. (CNS photo/Tyler Orsburn)

WASHINGTON (CNS) — The gathering outside the White House after dark Jan. 6 to protest U.S. aggression toward Iran was not nearly as big as a parade two days earlier protesting against the warlike moves. It certainly was not as loud.

But, in its own way, the peace vigil was just as strong.

The 30-minute vigil, organized by Faith in Public Life, drew about 100 to a park across the street from the Executive Mansion — about one-tenth the size of the Jan. 4 march down a downtown Washington street.

Still, it was “a real coming together on short notice of faith groups across the faith spectrum — Catholic, evangelical, Jewish, interfaith,” said the Rev. Jennifer Butler, a Presbyterian minister who is CEO of Faith in Public Life. “A real response to the march to war that we see.”

Five Catholic groups co-sponsored the vigil: the Conference of Major Superiors of Men, the Franciscan Action Network, the Maryknoll Office for Global Concerns, Pax Christi USA, and the Sisters of Mercy of the Americas Justice Team.

“Catholic groups really anchored the event,” Rev. Butler said, pointing to “their long history of peace activism and theological-moral understanding of the importance of working for peace.”

Also co-sponsoring the vigil were the National Friends Service Committee and the United Church of Christ’s Justice and Witness Ministries.

The vigil may have been quiet by design, but the peacefulness was enhanced by the absence of a troupe of drummers who have been protesting daily outside the White House in recent months urging the impeachment of President Donald Trump.

Asked if she had made a deal with the drummers to take the night off, Rev. Butler told Catholic News Service, “That was the Holy Spirit! I didn’t even know about the drummers.”

“We will all go to jail” rather than allow a war against Iran to proceed, declared the Rev. Alvin O’Neal Jackson, a Disciples of Christ minister who as a teenager worked on security matters in 1968 for the Poor People’s Campaign in Washington and is part of the planning for a second such campaign set for June 20 in Washington.

“We will not be silent anymore,” Rev. Jackson told his fellow vigilers, repeating the sentence four times.

At the close of the vigil, participants were asked to share what thoughts they had on recent U.S. military moves, including the slaying of Iranian Maj. Gen. Qassem Soleimani in a drone strike in Iraq Jan. 3.

“In Latin, the phrase is, ‘Cui bono?’ Who benefits? Who benefits from the atrocities that have been done?”, one man asked, citing the rising stock prices of defense firms and weapon makers in the New Year.

“The crowd and the people just offered up their thoughts. It was like a Quaker meeting,” Rev. Butler said. It was a beautiful evening.”

While the vigil might have been outnumbered by the march 10-to-1, there were 10 peace vigils conducted around the country Jan. 6 in such places as San Diego; Portland, Oregon; Asheville, North Carolina; and New Haven, Connecticut. The Washington vigil appeared on Facebook Live, Rev. Butler said.

“The progressive religious movement is getting its footing again. It’s been developing over a period of 10 years,” she told CNS. “When I first started this work in Washington in 2005, a number of these groups were not working together. There were a lot of divisions. It’s been really heartening to see that, pre-Trump, we had built strong relationships to advance health care reform and make efforts towards immigration reform.”

And when it came to the vigil, Rev. Butler said, “one of my staffers said to me at the end of the evening. ‘We came together because we were already leaning in together.'”