U.S. President Donald Trump addresses thousands of pro-life supporters during the 47th annual March for Life in Washington Jan. 24, 2020. He is the first sitting president to address the pro-life event in person. (CNS photo/Leah Millis, Reuters)

WASHINGTON (CNS) — President Donald Trump credited attendees at the 47th annual March for Life for their commitment to protect the life of unborn and born children.

“Together we are the voice for the voiceless,” Trump told tens of thousands of people gathered at a noontime rally Jan. 24 on the National Mall.

“You stand for life each and every day. You provide housing, education, jobs and medical care for the women that you serve,” the president said.

Trump was the first president to speak in person in the 47-year history of the March for Life. He spoke for about 10 minutes at the start of the rally and before attendees began their march to the Supreme Court.

“Today, as president of the United States, I am truly proud to stand with you. We’re here for a very simple reason: to defend the right for every child, born and unborn, to fulfill their God-given potential,” Trump said.

He also credited the young people who made up a large portion of the crowd for their commitment to life, saying they were “the heart of the March for Life.”

“It’s your generation that is making this a pro-life nation,” the president said, adding, “You are powered by prayer and motivated by pure unselfish love.”

Trump’s speech before the largely supportive crowd was punctuated by applause and cheers. Calls of “Four more years” welcomed him to the podium.

The pro-life movement has been buoyed by Trump’s appointment of two conservative justices to the Supreme Court. Their goal has been a reversal of the court’s 1973 decision in Roe v. Wade that legalized abortion.

Vice President Mike Pence and his wife, Karen, addressed the rally in a video recorded in Rome prior to Trump’s arrival at the rally. Pence met with Pope Francis earlier in the day.

He said in the video that he thanked the pope “for all that he and Catholic Americans have done to defend the sanctity of human life in the history of this movement.”

Karen Pence thanked attendees for their witness and compassion for the unborn. “Thank you for standing for life,” she said. “We cannot be more proud to be on this journey with you.”

The vice president called Trump the “most pro-life president in American history” and a “champion for the movement.”

“So keep standing strong and stand with that love and compassion that has always defined the movement for life,” Pence said.

Not all participants in the rally agreed with Pence’s sentiments. A group of Franciscan friars and their supporters held signs aloft outside of the security barrier with messages reading “I am 100% Pro-Life,” “Care for the Unborn,” “Protect the Earth” and “Seek Justice for the Poor.” 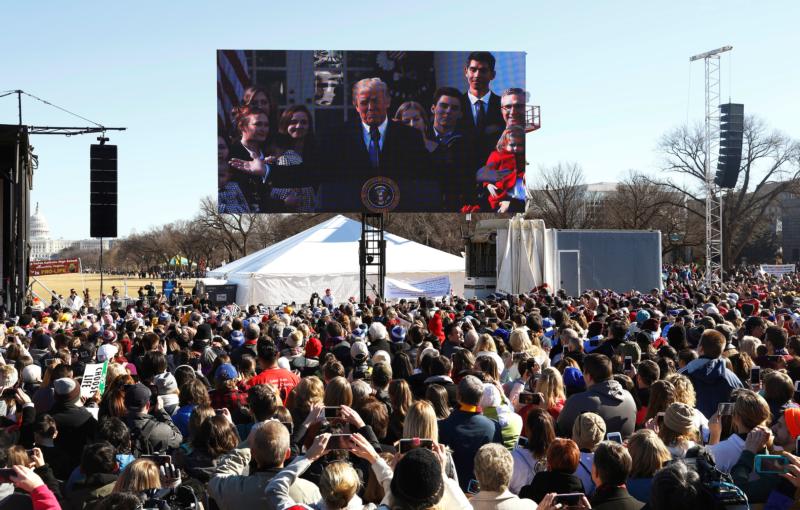 President Donald Trump is projected on a large video screen as he addresses attendees of the annual March for Life rally in Washington Jan. 19. The address took place from the Rose Garden at the White House. (CNS photo/Eric Thayer, Reuters)

PREVIOUS: Youthful crowd seen as sign march is a hit with the young

NEXT: Equality for women must include the unborn, says marcher