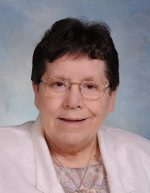 Sister William Margaret Romen, O.S.F., 78, died Jan. 20 in Assisi House and Queen of Peace Convent in Aston. She had been a professed member of the Sisters of St. Francis of Philadelphia for 57 years.

Born Barbara Anne Romen in Philadelphia, she graduated from West Catholic High School and worked as a key punch operator at Pringle Publications in Bryn Mawr, a member of Our Mother of Good Counsel Parish.

Sister William Margaret professed her first vows with the Franciscan Sisters in 1963 and later earned a B.A. in English from Neumann University. She ministered primarily in elementary education and eldercare.

Since 1986 Sister William Margaret ministered in the Archdiocese of Philadelphia. During those 34 years she served as part of the support staff at Assisi House, the congregation’s retirement residence in Aston.

The funeral Mass was celebrated Jan. 27 at Assisi House and burial followed in Our Lady of Angels Cemetery in Aston.

Sister William Margaret is survived by cousins and by her Franciscan family.

NEXT: Sister Gertrude Provost dies at 91; had served in Pakistan