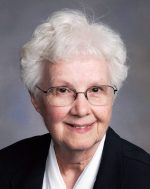 She also served at York Catholic High School in the 1980s.

There she continued bringing spiritual joy, peace and prayerfulness to all those around her until her death after a long illness.