Sister Gertrude Provost dies at 91; had served in Pakistan 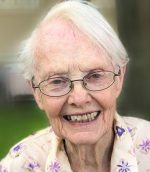 A native of Mason, Wisconsin, Sister Gertrude attended the University of Wisconsin-Stout before entering the Medical Mission Sisters in 1950.

After earning an R.N. from St. Mary’s College in San Francisco and a B.S.N. from the University of San Francisco, Sister Gertrude was missioned to Dacca, Bangladesh. There she became a trained midwife during the two years she spent overseeing the school of nursing and children’s ward.

After studying theology at Regina Mundi in Rome, Italy, Sister Gertrude was directress of nursing at the Muashir Hospital in Amman, Jordan from 1961 to 1964. For one year she taught missiology, liturgy and doctrine in South Shields, England and served as assistant novice mistress.

She returned to nursing at Muashir Hospital in Jordan for four years and then in 1970 went to Holy Family Hospital in Rawalpindi, Pakistan where she was directress of the school of nursing for three years.

In 1974 Sister Gertrude attended the Royal College of Nursing in London where she earned a diploma in international teaching of nursing. She remained in London until 1977 where she did mission appeals and promotional work for her society. She then moved back to Pakistan where she was formation directress for six years.

She returned home in 1983, using her nursing skills to care for her parents in their final years. She also completed a CPE course while living in Wisconsin.

Returning to mission in 1995, Sister Gertrude taught nursing classes in Mirpurkhas, Pakistan until repatriating to the U.S. later that year to care for elderly sisters and assist in the Archives Department at her society’s North American Headquarters in Philadelphia.

For more than a decade, Sister Gertrude joined Sister Jean Schulties in leading an empowering course at Interim House, a residential program for women recovering from drug and alcohol addiction.

Sister Gertrude moved to the Philadelphia Protestant Home shortly before her passing. She had an extraordinary gift of kindness in caring for the elderly. She is remembered for her gentle, humble nature and her gift for beautiful poetry. She will be deeply missed.

The funeral Mass was celebrated Feb. 4 at the Medical Mission Sisters’ North American Headquarters in Philadelphia.