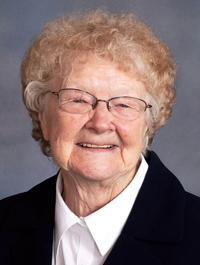 From this point on, Sister Mary Elizabeth served as an elementary school teacher from April 1950 through June 1953.

In August 1953 through June 1959, she taught French at “Our Lady’s” in Mt. Carmel, Pa. and continued to teach French throughout the remainder of her teaching apostolate.

Sister Mary Elizabeth served students in Virginia and Pennsylvania, including Archbishop Prendergast and Bishop Shanahan high schools in the Philadelphia Archdiocese. From 1997 to 2005, she assisted at St. Laurence School in Upper Darby. From 2005 to 2012, she assisted with parish activities at Queen of Peace Parish in Ardsley.

Sister Mary Elizabeth entered Camilla Hall in August 2012 where she dedicated herself to the Apostolate of Prayer until her death.

Sister Mary Elizabeth is survived by her sister-in-law Elizabeth (James), many loving nieces, nephews, grandnieces, grandnephews and her congregation of I.H.M. sisters.