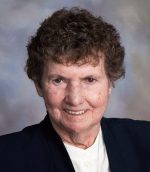 Born Eileen M. Foy on Aug. 7, 1939 in Philadelphia and raised in her home parish of St. Cecilia, Philadelphia, she entered the Sisters, Servants of the Immaculate Heart of Mary on July 16, 1958. She received her habit and her religious name, Sister Mary Sheila, on Jan. 16, 1959 and professed her first vows on Jan. 17, 1961.

From this point on, Sister Sheila served as an elementary school teacher from 1961 to 1979. Later that year she went to Lourdes High School in Shamokin to teach French then to Bishop Hafey in Hazleton in 1983. Beginning in August 1985 Sister Sheila began serving in administrative posts.

In 1985 she was the dean of activities at Archbishop Prendergast High School in Drexel Hill, president of St. Maria Goretti High School in Philadelphia in August 1993 and principal of Our Lady of Lourdes Academy in Miami beginning 2002.

Sister Sheila continued her ministry of serving, supporting and praying  when she entered Camilla Hall as a resident in 2013 until her death.

She is survived by her sisters Sheila Kilpatrick, Denise Quinn, and her sister-in-law Margaret (Edward), many loving nieces, nephews, grandnieces, grandnephews, and her congregation of I.H.M. Sisters.

NEXT: Sister Marian Frantz, teacher and leader, dies at 84