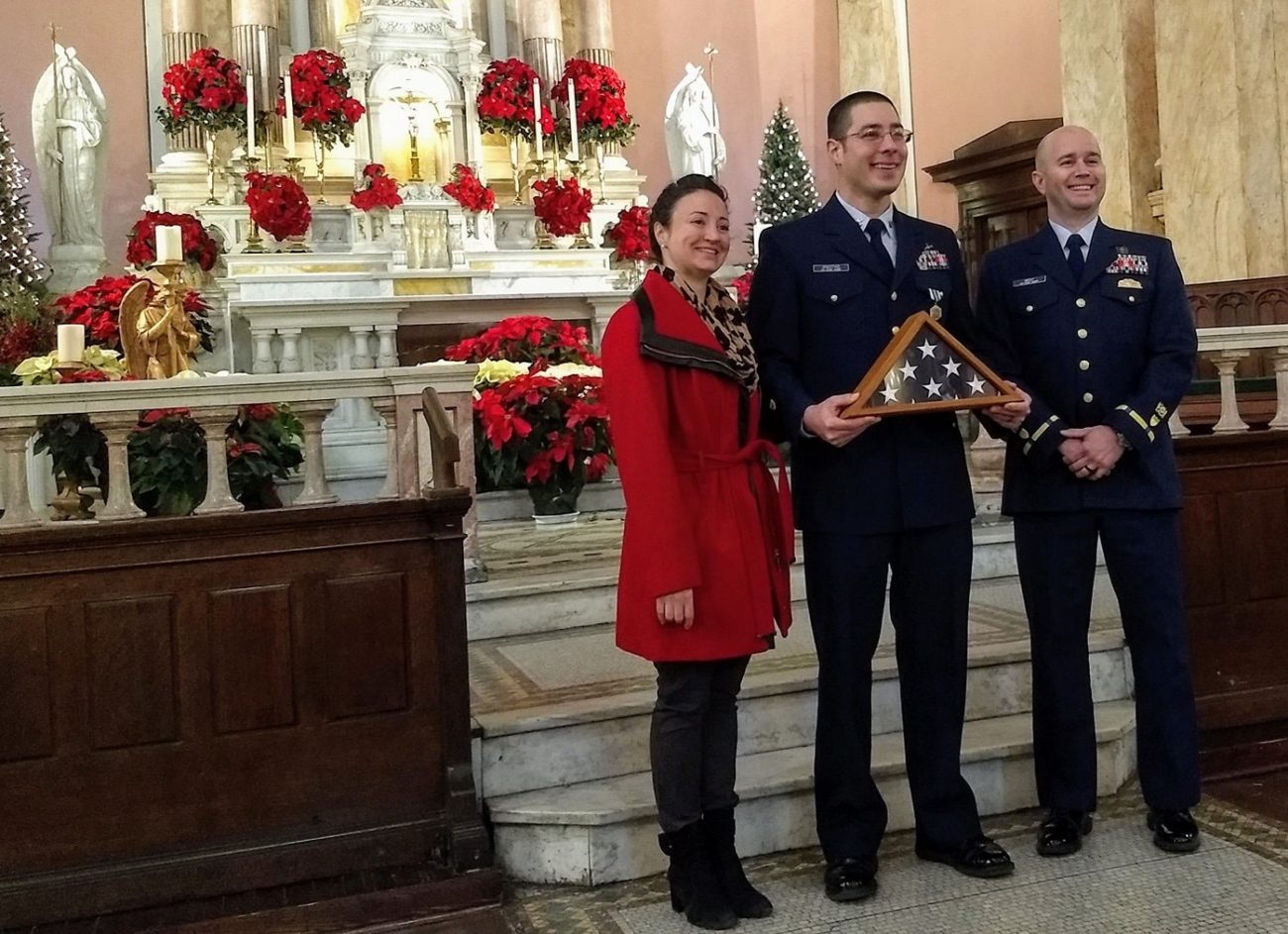 Michael Anastasi (center) stands in the National Shrine of St. Rita during a ceremony marking his retirement as a first class petty officer of the U.S. Coast Guard, along with his wife Tara and Coast Guard Chief Warrant Officer Michael West.

An unusual event occurred early this month at the National Shrine of St. Rita of Cascia in South Philadelphia.

A special ceremony Jan. 2 in the former St. Rita Church on South Broad Street, which closed as a parish in 2014 but remains as the home of the shrine, featured First Class Petty Officer Michael Anastasi of the United States Coast Guard who marked his formal retirement from military service after 20 years active duty.

At the ceremony attended by his wife, Tara, family, friends and former military comrades, citations were read by his former superior, Chief Warrant Officer Michael West, who said, “Petty Officer Anastasi’s dedication, judgment and devotion to duty are most heartily commended and in keeping with the highest traditions of the United States Coast Guard.”

The ceremony ended with a blessing given by Augustinian Father Robert Guessetto of the St. Rita’s Shrine staff. This was especially appropriate because Anastasi has now joined the shrine’s staff as director of security.

A native of Upland, Delaware County, Anastasi well remembers his dad bringing him to Philadelphia and the Shrine of St. Rita when he was a kid.

Anastasi joined the Coast Guard not long after his graduation from Ridley High School. Because the fundamental duty of the guard is the protection of America’s shores and waterways, he did not serve overseas. 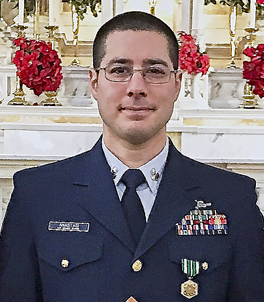 At first he was in California but over the years he also was stationed in Mississippi, Port Huron (Mich.), Detroit, Boston and Washington, D.C., among other locations.

A Catholic from his birth, wherever he went his faith went with him. When he was in Oakland, he became an altar server. Over time he took on other roles, for example lectoring and while in Washington he was a volunteer guard at the Basilica of the National Shrine of the Immaculate Conception.

Anastasi also joined the Knights of Columbus and is proud of the fact that he is a fourth degree knight.

They say there are really no coincidences. When he and Tara married it was Saturday, May 22, 2010, the Feast of St. Rita of Cascia.

After he decided to retire to the Philadelphia area, the security position at the shrine happened to open up.

The National Shrine of St. Rita has been a fixture on South Broad Street and a place of pilgrimage for more than a century. Although St. Rita closed as a parish the shrine continues on as special ministry of the Augustinian Fathers because St. Rita (1381-1457) is the best-known female Augustinian saint and a powerful intercessor with devotees around the world.

Michael and Tara have already purchased a home in nearby St. Thomas of Aquinas Parish, a multi-cultural parish in the rapidly gentrifying Point Breeze section of South Philadelphia.

Although he has already become an extraordinary minister of holy Communion at St. Rita’s Shrine, his new position will be not just a job but a vocation.

“I have given the first 20 years of my (working) life to the world, and now I will give the rest to God,” Anastasi said.

PREVIOUS: Serving the world’s poor, she’s making a difference in it

NEXT: Married couple shares life, hope with people at end of theirs