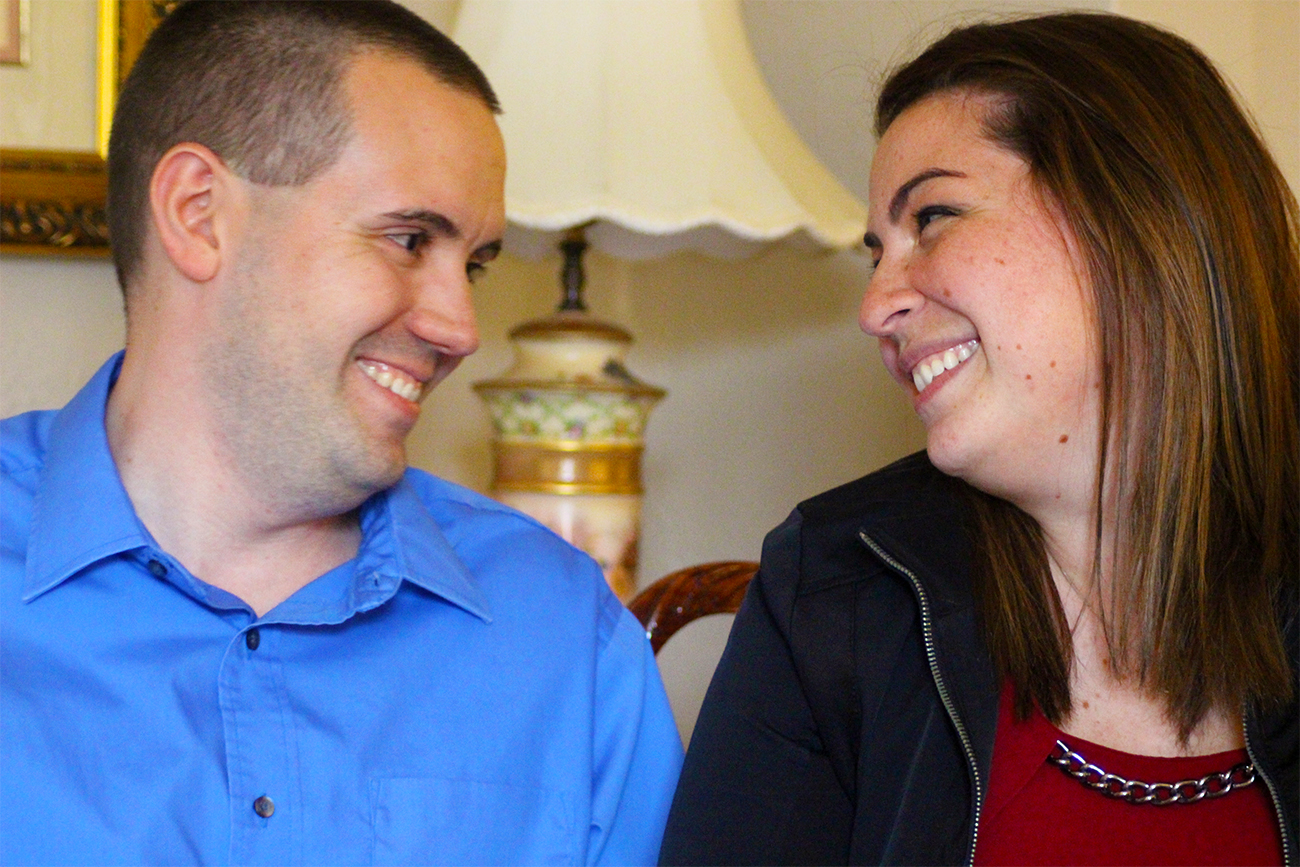 Jim and Amanda Brady, members of St. Stanislaus Parish in Lansdale, rely on faith and on each other to sustain them in their often challenging work. (Photo by Gina Christian)

Jim Brady can look at his wife Amanda and know when she’s had a long day, one she might not want to discuss for another week.

And since Amanda, a Montgomery County 911 dispatcher, routinely spends 12 hour shifts talking to people at death’s door, he can relate – and probably do so better than most husbands, since he himself is a funeral director.

“The majority of the funerals I supervise are Catholic,” said Brady, who works for Campbell Funeral Homes, located in Richboro and in Philadelphia’s Lawncrest section. “So I’m extra immersed in the church, and it makes you think more about what is beyond this world, and about heaven.”

Because of the work they do, the couple “don’t take anything for granted,” including each other, said Amanda.

Now married eight years, the pair – who belong to St. Stanislaus Parish in Lansdale — met while attending the former Cardinal Dougherty High School. Both were part of the stage crew for the school musical, and Amanda, then a sophomore, asked junior Jim to her class’s sock hop.

“I was the bold one,” she laughed.

Three days later – “November 22,” Amanda recalled – Jim returned the favor by asking her to go out with him.

From that point on, they never dated anyone else, even when they went to separate colleges – Jim in 2004 to Northampton Community College in Bethlehem, Amanda a year later to Arcadia University in Glenside.

If anything, absence made their hearts grow fonder for one another.

“I didn’t have my license, and he’d only just gotten his, so it’s not like we could drive back and forth to see each other all the time,” said Amanda. “It made us look forward to seeing each other.”

That same sense of anticipation sustains them whenever their current work schedules conflict, as they did until recently.

“Amanda just came off an odd schedule where we’d be coming home and going to work at different times, and it’s like getting readjusted,” said Jim. “We’re kind of ‘re-knowing’ each other.”

The joy each finds in the other balances the stress and sorrow they routinely encounter in their respective work.

“Most times, when people call 911, it’s the worst moment in their lives,” said Amanda. “And for them, the next call after me is often to someone like my husband.”

For Jim, the hardest cases are deaths “that are sudden, or that involve a child,” he said. “That makes you pause and think, ‘Am I really doing this?’”

At the same time, both remain deeply committed to their work, which they see as a mission.

And sometimes, they’re even able to find humor in their somber tasks.

“I’ve had people call 911 for barking dogs, keys that have fallen in the toilet, and information on what time the Phillies game starts,” said Amanda. “At least with the Phillies, I know it’s a 7:05 p.m. game.”

Scheduling date nights and “you time” with each other helps the couple to keep connected. Often, the two simply curl up on the couch with dinner and a favorite television show, grateful for the simple gift of each other’s presence, and that of the One who brought them together.

“Our faith supports us,” said Jim. “You’ve got something greater than you behind you that’s kind of pushing you along.”

PREVIOUS: Retiring from the service, he embarks on new service to church

NEXT: Priest mentor to Archbishop Perez still going strong at 89