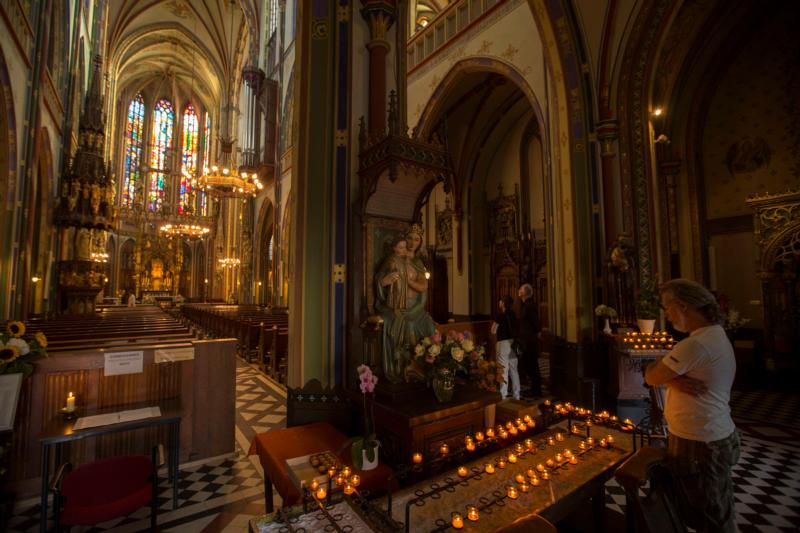 A man prays in a Catholic church in Amsterdam. A Dutch Catholic newspaper warned churches will continue to close in the Netherlands, where half of all Catholic parishes have already been dissolved amid plummeting church participation. (CNS photo/Cris Toala Olivares, Reuters)

OXFORD, England (CNS) — A Dutch Catholic newspaper warned churches will continue to close in the Netherlands, where half of all Catholic parishes have already been dissolved amid plummeting church participation.

“It’s never good to panic, but there are grave concerns about the way things are going here,” said Peter Doorakkers, an editor at the Katholiek Nieuwsblad weekly.

“It’s been hoped people would draw the obvious conclusion — that if you want your church to stay open, you don’t just need to support it financially, you also have to attend it more. But if you look at the numbers at Mass now and average ages, it’s obvious more churches will close in the near future.”

The editor spoke to Catholic News Service in mid-January after the paper published the results of a yearlong investigation on attitudes to church closures in the 17.1 million-strong Dutch population.

In a Jan. 2 feature, Katholiek Nieuswblad said its investigation had focused on the “social and economic consequences of church closures,” especially for rural congregations.

It said the Catholic population of the Netherlands had fallen by a fifth in 15 years, with just 5% of the country’s 3.7 million registered Catholics still attending Mass, while 55% of parishes had closed.

However, the weekly said research suggested Dutch society had not yet reached “peak secularization” and warned that, with the majority of church funds devoted to maintaining buildings, the “biggest wave of church closures” was still to come.

Katholiek Nieuwsblad said in an editorial it had hoped to show the disappearance of Catholic parishes had “far-reaching consequences” for local communities, but conceded that many former parish functions had instead been “effortlessly and silently taken over” by other social organizations. While some closures had been painful, the newspaper said, most village communities had “recovered surprisingly quickly.”

However, its findings had “touched an open nerve,” prompting extensive responses from readers, the newspaper said.

Mark Van Dinteren, a Catholic living near Nijmegen, said he had decided not to travel to another parish after his village church closed and instead joined others in “finding their own way.”

“I do miss the church at times, especially at important moments like when someone passes away, when the whole village used to gather in the church,” Dinteren told Katholiek Nieuwsblad. “It makes you realize the church’s importance. But even with the church closed, we still find ways to practice our faith.”

Dini Burgers, a Catholic from Kilder, near the German border, said she and others had tried to save their church as “a place of connection, not just of worship,” but told the newspaper the faith no longer “played an important part” in village life.

“Individualism plays a big role, and the church suffers from this as well — people do their own thing and don’t want these commitments anymore,” Burgers said.

Doorakkers told CNS the discovery that most churches were not “missed” by local inhabitants had been “unexpected and sobering,” contradicting the assumption that Catholic parishes had a “positive impact on the social fabric.”

Whereas most parishioners stopped attending Mass altogether when their church closed, the editor added, some Catholics at Afferden had continued going to the local St. Victor’s Church after it was turned into a Buddhist temple in 2017, “without apparently noticing the difference.”

Many of the most vibrant Catholic parishes are now made up of Polish and other minority communities, Doorakkers said.

“Dutch parishes are also working on renewal projects to enhance their missionary profile, and some good things are happening, but it’s all necessarily small-scale,” the editor said. “The Catholic Church is wrestling with this problem everywhere in Europe, but it’s probably a bit greater now in our country than elsewhere.”

“Though every diocese has its own way of dealing with this problem, we get no government support here in the Netherlands — all the finance has to come from local people.”

Rik Torfs, professor at the Catholic University of Leuven in neighboring Belgium, said the findings demonstrated the need for a fresh outlook at a time when the church was “weighed down by organizational and logistical problems.”

“Despite the clumsy way churches often spread their message, the message’s content is so strong that it will gain more attention at some point,” Torfs told Katholiek Nieuwsblad. “But we have to believe in it ourselves — otherwise, who will want to belong to a club that only talks about downsizing?”

In an August report, the Nederlands Dagblad daily said the shortage of native priests meant that, over the last decade, the number of foreign clergy had doubled. Foreign clergy now form 22% of the clergy and half of the clergy in the Haarlem-Amsterdam Diocese.

In a 2015 petition to Pope Francis, Catholics accused Dutch Cardinal Willem Eijk of Utrecht of “destroying communities” when he proposed consolidating 326 parishes into 48 larger territorial units.

In February 2019, Catholics protested when Utrecht’s 16th-century Gothic St. Catherine’s Cathedral was put up for sale. However, in a pastoral letter, Cardinal Eijk warned two-thirds of churches in his archdiocese and its suffragan sees would be forced to close by 2025.

In his editorial, Katholiek Nieuwsblad’s chief editor, Anton De Wit, said the church should look at the current situation as “the starting point for much-needed new reflection on the church’s future.”

“The breakdown will continue unabated, and even accelerate, in the decade now beginning. But we can also turn it into a decade of spiritual edification, relieved of the unnecessary burden of a petrified faith,” he said.

NEXT: Gratitude to God should expand hearts, lead to hospitality, pope says