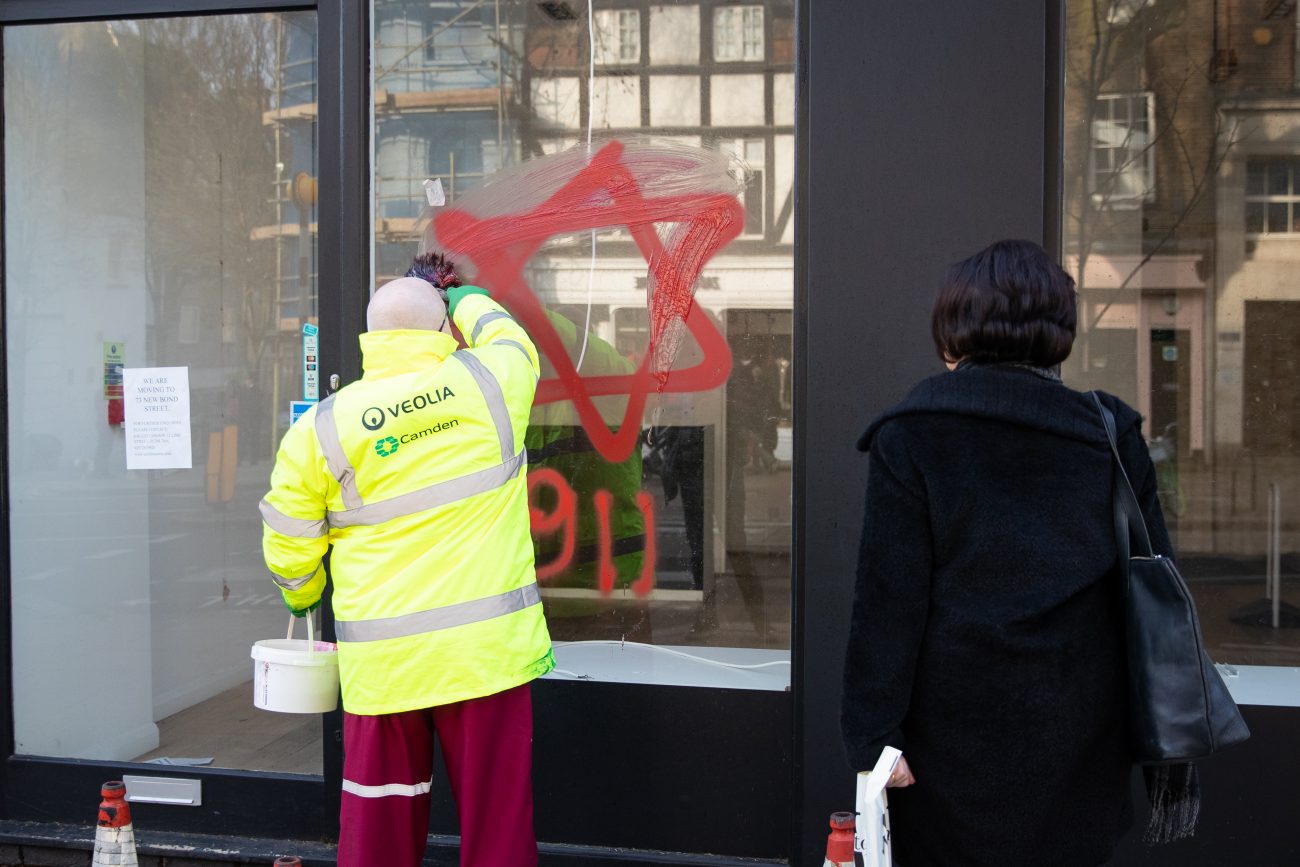 A worker removes anti-Semitic graffiti on a shop window in the Belsize Park neighborhood of London. Cardinal Vincent Nichols of Westminster used his New Year message to condemn the graffiti, saying such hatred “shames us all” and can have no place in society. (CNS photo/Aaron Chown, Reuters)

MANCHESTER, England (CNS) — An English cardinal has condemned “all expressions of hatred” after anti-Semitic graffiti was daubed across shops, cafes and a synagogue in London.

Cardinal Vincent Nichols of Westminster denounced the Dec. 29 attacks, which coincided with the Jewish religious festival of Hanukkah.

In a New Year message posted Jan. 1 on the website of the Archdiocese of Westminster, the cardinal asked Catholics to include building up the kingdom of God among their New Year resolutions.

“We look for justice and compassion, for generosity and truth, for faithfulness and love, for a sense of unity and shared well-being,” said Cardinal Nichols before suggesting ways in which Catholics can improve their society.

He proposed that “each of us, every person in our society, will shun all form and expressions of hatred against others.”

“The recent anti-Semitic graffiti in north London brings shame to us all,” said the cardinal, whose archdiocese covers the city north of the River Thames. “Such hatred can have no place in our way of life. Only when we see the good in each other will every person feel welcomed and unafraid.”

His remarks came in response to vandals who spray-painted the Star of David and “9/11” in red over about a dozen properties in Hampstead and Belsize Park, affluent suburbs of north London with high Jewish populations. One of the targets was an Israeli-style restaurant.

The reference to the 2001 attacks on the United States is a popular conspiracy theory within anti-Semitic networks that seek to shift the blame for the atrocities from Islamic terrorists to the Jewish people.

In response to the attacks, the Board of Deputies of British Jews tweeted: “This is a reminder that anti-Semitism is still with us.”

Anti-Semitic incidents last year rose to their highest recorded level in the U.K., with nearly 900 recorded incidents in the first six months of 2019. The figures for the second half of the year are due to be released in February.

According to the Community Security Trust, a Jewish group that monitors anti-Semitism in the U.K., the incidents increased by 10% over the same period in 2018.

NEXT: Pope to health workers: Uphold ‘the truest human right, the right to life’