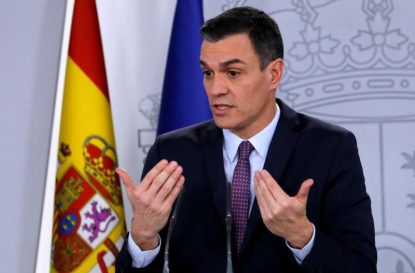 VALENCIA, Spain (CNS) — A Spanish cardinal warned Catholics that their country is on the verge of a communist revival.

Cardinal Antonio Canizares Llovera of Valencia said the election of the coalition government in November had created a situation “more critical” than had been initially thought or believed.

“Marxist communism, which seemed destroyed with the fall of the Berlin Wall, has been reborn and is certain to govern Spain,” said Cardinal Canizares, vice president of the Spanish bishops’ conference.

“The sense of democracy is substituted for the imposition of a single way of thinking and by authoritarianism and absolutism incompatible with democracy,” he said.

In a letter posted Jan. 11 on the diocesan website, the cardinal said it almost felt like Spain was copying the faults of socialist governments of Latin America, such as Venezuela.

“With much pain, I have to tell you and warn you that I have perceived an attempt to make Spain stop being Spain,” he said.

The cardinal said the spirit of transition to democracy following the Spanish Civil War of 1936-39 and the subsequent rule of Gen. Francisco Franco had been “emptied and forgotten,” only to be replaced by ideologies that “always divide and never unite.”

In an apparent reference to the civil war, he recalled the memory of hatred, intransigence and of “faces stressed and rejected,” and he predicted that a divided Spain risked returning to old confrontations.

Cardinal Canizares concluded his letter, also published prominently on the cover of Paraula, the diocesan newspaper, by repeating an earlier appeal to Catholics to “pray insistently” for Spain.

His sentiments were echoed by Archbishop Jesus Sanz Montes of Oviedo, who said in a Jan. 12 letter posted on his diocesan website that Spain was entering a “grave moment” in its history.

He warned Catholics of “policies and paths” that would limit freedom in a variety of ways, of the use of lies as a political tool and of political censorship which, he said, would be used to stifle free speech with impunity.

All Catholics could do was to be the faithful Christians they were called to be in the midst of society, he said.

Prime Minister Pedro Sanchez, leader of the Spanish Socialist Workers’ Party, took office Jan. 8 after entering into a coalition with United We Can (Unidas Podemos), an extreme left minority party led by Pablo Iglesias. Sanchez declined the traditional inauguration oath on a Bible and crucifix.

Sanchez’s government is committed to a secularizing agenda, including the exclusion of religion from school curricula.

He also pledged to legalize euthanasia, introduce secular sex education programs, and nationalize property the government argues has been “wrongly registered” to the Catholic Church.