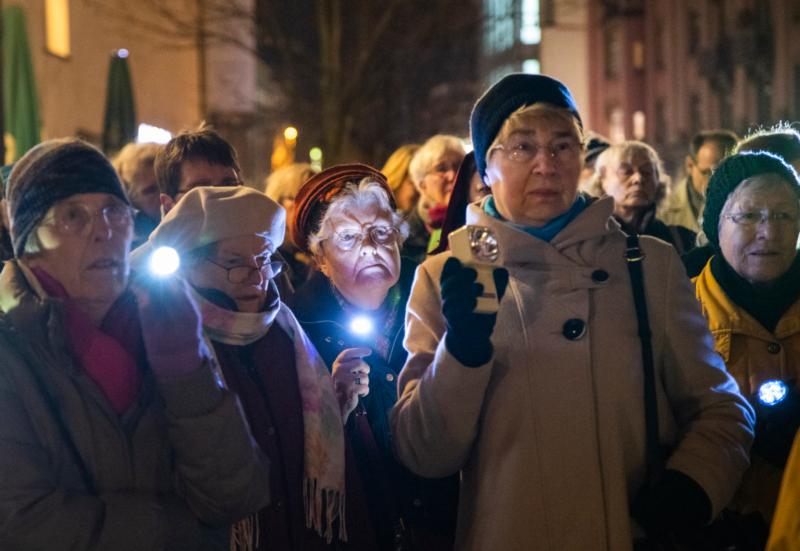 Women shine flashlights on the main entrance to the Imperial Cathedral in Frankfurt during a 2018 protest against sexual abuse in the Catholic Church in Germany. The act was to symbolically bring light into the darkness of abuse. (CNS photo/Bert Bostelmann, KNA)

BONN, Germany (CNS) — German bishops urged patience toward their efforts to deal with the sexual abuse scandal in the Catholic Church in Germany.

The German Catholic news agency KNA reported the bishops, meeting in Wurzburg, said the plans that resulted from the latest investigations needed time. Their appeal came 10 years since the first revelations of the abuse emerged.

“We need this time and we hope for understanding; we will not be absolving ourselves from the responsibility,” they said Jan. 28.

In specific terms, KNA reported, the bishops called for a “binding, supradiocesan monitoring of the areas of investigation, intervention and prevention” as well as standardized personnel files of clergy and the ongoing development of material compensation.

Last September, a working group had proposed two models regarding compensation: Either a lump sum of 300,000 euros (US$330,000) per victim, or a graduated procedure calling, depending on the seriousness of each case, for compensation of 40,000 to 400,000 euros.

In 2010, Jesuit Father Klaus Mertes, at that time the head of the Canisius-Kolleg school in Berlin, publicly divulged cases of abuse in the school, triggering an avalanche of new discoveries of such crimes in the church and society.

In their statement, the bishops stressed that, since 2010, they had made great progress in their processing of the scandal. They cited the guidelines now legally binding for the entire church in Germany as well as the rules on prevention that had been tightened several times.

“We are working further toward combating this crime,” the bishops said. “We will also, in the future, orient ourselves first and foremost to the viewpoint and needs of those affected. We will steadily continue our cooperation with church and civilian agencies.”