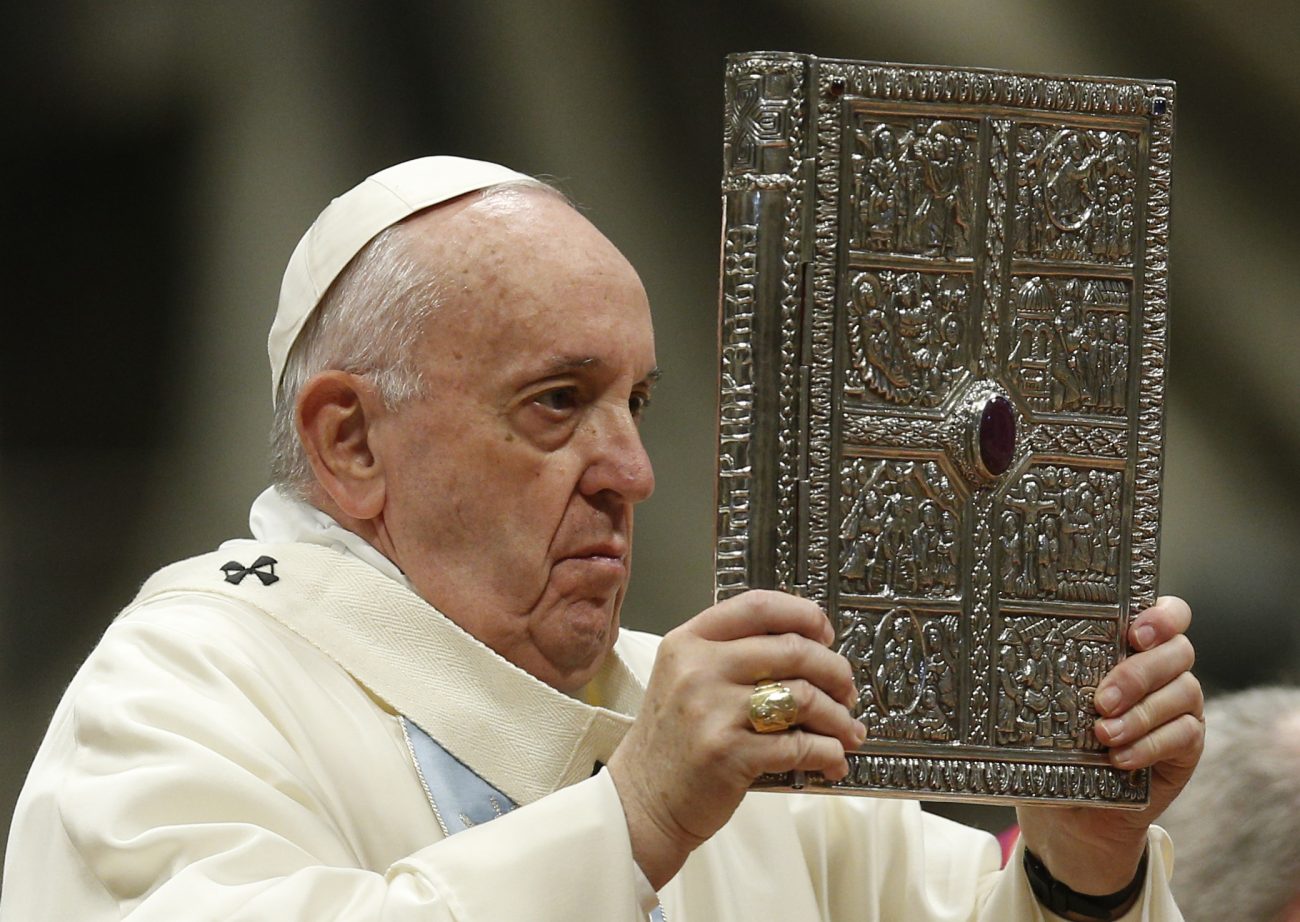 Pope Francis holds the Book of the Gospels as he celebrates Mass on the feast of Mary, Mother of God, in St. Peter’s Basilica at the Vatican Jan. 1, 2020. The pope has established the third Sunday in Ordinary Time as “Sunday of the Word of God.” It will be celebrated for the first time Jan. 26. (CNS photo/Paul Haring)

VATICAN CITY (CNS) — The newly established “Sunday of the Word of God” is an invitation to Catholics across the world to deepen their appreciation, love and faithful witness to God and his word, Pope Francis said.

By papal decree, the third Sunday in Ordinary Time — Jan. 26 this year — is to be observed as a special day devoted to “the celebration, study and dissemination of the word of God.”

A day dedicated to the Bible will help the church “experience anew how the risen Lord opens up for us the treasury of his word and enables us to proclaim its unfathomable riches before the world,” the pope said in the document establishing the special Sunday observance.

Dioceses and parishes have been invited to respond with creative initiatives, helpful resources and renewed efforts for helping Catholics engage more deeply with the Bible at church and in their lives.

Archbishop Rino Fisichella, president of the Pontifical Council for Promoting New Evangelization, said added emphasis on the importance of the word of God is needed because “the overwhelming majority” of Catholics are not familiar with sacred Scripture. For many, the only time they hear the word of God is when they attend Mass, he told Vatican News Sept. 30, when the papal document, titled “Aperuit Illis,” was published.

“The Bible is the most widely distributed book, but it’s also perhaps the one most covered in dust because it is not held in our hands,” the archbishop said.

With this apostolic letter, the pope “invites us to hold the word of God in our hands every day as much as possible so that it becomes our prayer” and a greater part of one’s lived experience, he said.

In his letter, Pope Francis wrote, “A day devoted to the Bible should not be seen as a yearly event but rather a yearlong event, for we urgently need to grow in our knowledge and love of the Scriptures and of the risen Lord, who continues to speak his word and to break bread in the community of believers.”

“We need to develop a closer relationship with sacred Scripture; otherwise, our hearts will remain cold and our eyes shut, struck as we are by so many forms of blindness,” he wrote.

Sacred Scripture and the sacraments are inseparable, he wrote. Jesus speaks to everyone with his word in sacred Scripture, he said, and if people “hear his voice and open the doors of our minds and hearts, then he will enter our lives and remain ever with us.”

Pope Francis urged priests to be extra attentive to creating a homily each Sunday that “speaks from the heart” and really helps people understand Scripture “through simple and suitable” language.

The homily “is a pastoral opportunity that should not be wasted,” he wrote. “For many of our faithful, in fact, this is the only opportunity they have to grasp the beauty of God’s word and to see it applied to their daily lives.”

The pope also suggested pastors provide parishioners with the Bible, a book of the Gospels or other catechetical resources, “enthrone” the Bible in order to emphasize the honor and sacred nature of the text, bless or commission lectors of the parish and encourage people to read and pray with Scripture every day, especially through “lectio divina.”

“The Bible cannot be just the heritage of some, much less a collection of books for the benefit of a privileged few. It belongs above all to those called to hear its message and to recognize themselves in its words,” the pope wrote.

“The Bible is the book of the Lord’s people, who, in listening to it, move from dispersion and division toward unity” as well as come to understand God’s love and become inspired to share it with others, he added.

The celebration of the Sunday of the Word of God also “has ecumenical value, since the Scriptures point out, for those who listen, the path to authentic and firm unity,” he wrote. The third Sunday in Ordinary Time falls during that part of the year when the church is encouraged to strengthen its bonds with the Jewish people and to pray for Christian unity.

The document was published on the feast of St. Jerome, patron saint of biblical scholars and doctor of the church, who said, “Ignorance of Scripture is ignorance of Christ.” The title, “Aperuit Illis,” is based on a verse from the Gospel of St. Luke, “Then he opened their minds to understand the Scriptures.”

The pope said it is impossible to understand the Scriptures in depth without the Lord who opens people’s minds to his word, yet “without the Scriptures, the events of the mission of Jesus and of his church in this world would remain incomprehensible.”