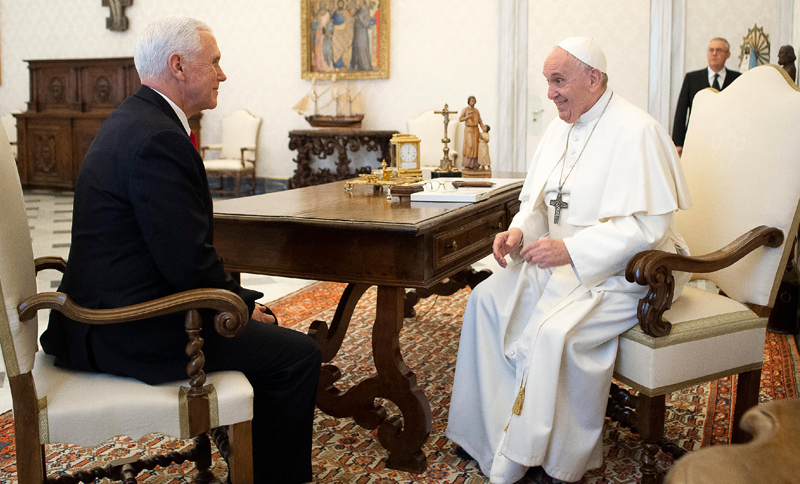 VATICAN CITY (CNS) — After Pope Francis and U.S. Vice President Mike Pence met privately for nearly an hour at the Vatican, Pence told the pope that his Roman Catholic mother will be pleased with the visit.

“Thank you, Your Holiness. You have made me a hero,” said Pence, who was raised Catholic but became an evangelical Christian.

The vice president, along with his wife Karen and daughter-in-law Sarah, arrived 10 minutes early for the meeting with the pope Jan. 24. They were welcomed by Msgr. Leonardo Sapienza, regent of the papal household.

As the pope and Pence sat down in the papal library of the Apostolic Palace, the vice president relayed greetings from U.S. President Donald Trump, who met with the pope in 2017.

“I wanted to extend the warmest greeting on behalf of President Donald Trump who so enjoyed his visit here,” Pence told the pope before reporters were ushered from the room.

After speaking with Pence for 59 minutes, with interpreters present, the pope greeted those accompanying the vice president on his visit, including Callista Gingrich, U.S. ambassador to the Holy See; her husband, former Speaker of the House Newt Gingrich; and Lt. Gen. Keith Kellogg, Pence’s national security adviser.

Pence then presented the pope with a wooden cross “made from a tree at the vice president’s residence.”

“Every other vice president since Walter Mondale has lived” at the residence, he told the pope.

The pope then presented a medallion, describing it as “angel of peace” conquering “the demon of war.”

Additionally, he gave Pence copies of several of his documents, which he jokingly called “a Vatican library.” The documents included “The Joy of the Gospel” on evangelization, “Amoris Laetitia” on the family, and “Laudato Si'” on the environment.

Pope Francis also gave the vice president a copy of his message for World Peace Day 2020.

“Here, I prepared for you the message for peace,” the pope said. “I signed it personally for you.”

Neither the Vatican nor the vice president’s office were expected to issue a statement on the issues discussed in their private meeting. However, Pence tweeted that the two discussed “today’s March for Life, Venezuela, and displaced religious minorities in the Middle East.” 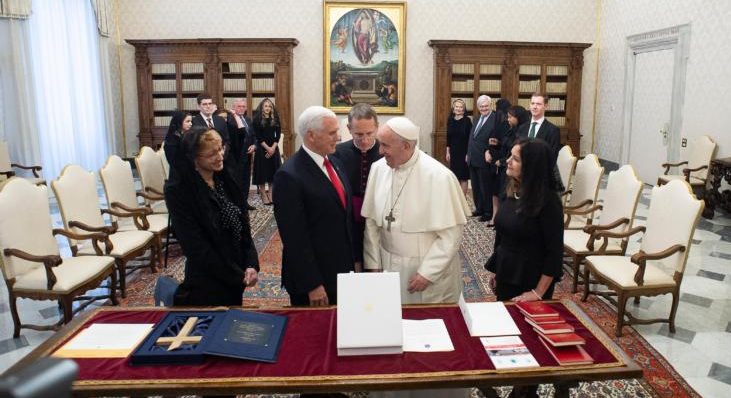 Pope Francis and U.S. Vice President Mike Pence exchange gifts Jan. 24, 2020, at the end of a meeting in the Apostolic Palace at the Vatican. (CNS photo/Vatican Media)

NEXT: Abuse happens within women’s orders too, cardinal says