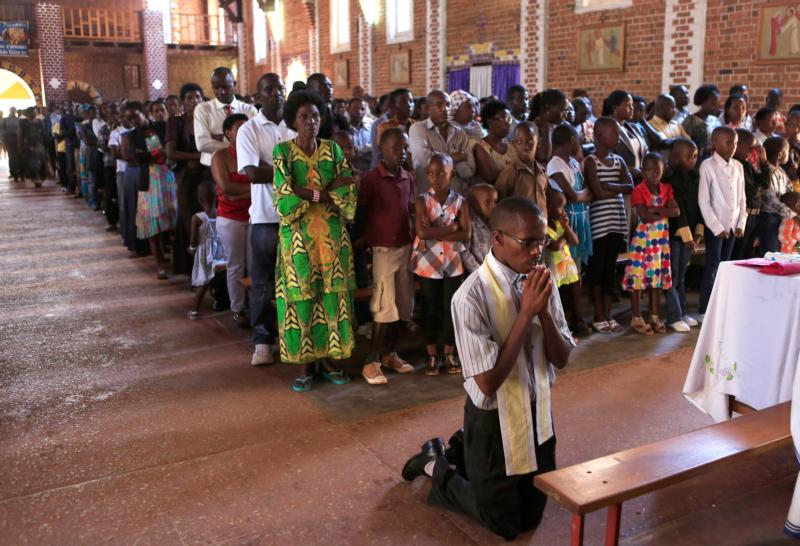 A man kneels in prayer during Mass at St. Famille Church in Kigali, Rwanda, April 6, 2014. The Catholic Church in the African nation is set to build a new cathedral on the site of a former prison in Kigali, the capital. (CNS photo/Noor Khamis, Reuters)

NAIROBI, Kenya (CNS) — The Catholic Church in Rwanda is set construct a new cathedral in the capital on the grounds of a former prison.

“The construction will be done by the church; it has received the land (from the government),” said Father Jean Pierre Nsabimana, the rector of the Divine Mercy Sanctuary in Rwanda.

The new building will be short distance from St. Michel, the current Kigali Catholic cathedral. In the past, church officials have said St. Michel was small and old.

Catholic bishops resisted tearing down the cathedral but, with the offer of the prison acreage, agreed to a deal, the sources added.

“The people are happy with the news of the cathedral on the prison premises. They have been hoping for a bigger church,” Father John Bosco Ntagungira of Regina Pacis parish in Kigali told CNS.

Father Christophe Ntagwabira, a Rwandan priest studying at the Catholic University of Eastern Africa in Nairobi, told CNS he believed the church would construct a monument to commemorate the old prison on the site.

Colonial authorities built Nyarugenge Prison on a 5.5-acre site in 1930, but in 2018 the last batch of inmates were moved to a new facility.

According to news reports, Kigali’s urban planning officials asked the church to produce a design by the end of February. The construction would be completed by the end of 2021.

Some priests said the latest developments are a sign of good relations between state and the Catholic Church in Rwanda. Relations had been strained since the 1994 genocide, during which more than 800,000 ethnic Tutsis and moderate Hutus were killed. Some Rwandan clergy — including Catholics — were accused of playing a key role during the killings.

In 2016, the country’s nine Catholic bishops apologized for the role played by individual clergy during the genocide.

The news of the cathedral comes at a time when Rwanda has moved to control the number of churches in the country.

Hundreds of churches were closed because of safety and health concerns in 2018. The closure had affected Catholic churches, especially those in rural areas, with Masses being suspended for some time.

NEXT: Vows of religious women, men not sacrifices but freedom, pope says