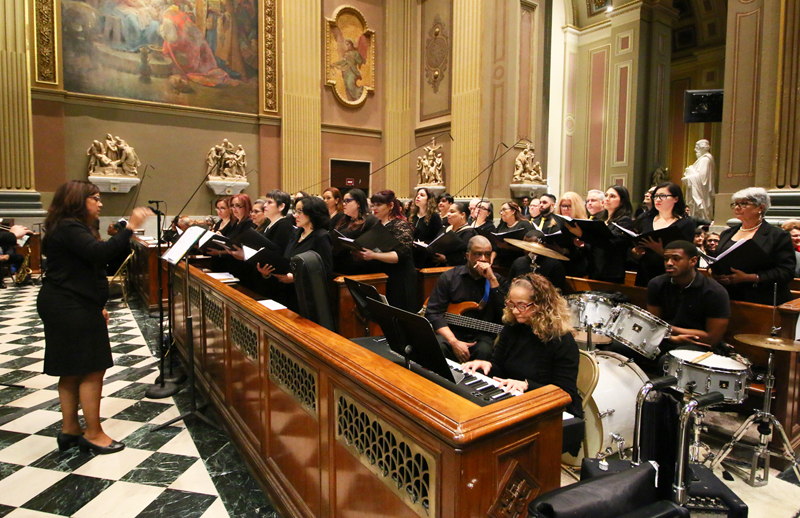 At his Feb. 18 installation Mass, Archbishop Nelson Perez heard more than a few familiar voices among the four choirs that served at the liturgy.

He also listened to beloved hymns – several of which he had personally selected for the occasion — that have been the soundtrack for his ministry.

And he even saw a few of his former music students performing with the three orchestras.

“I’ve been playing guitar since I was seven, and he helped me to get over the jitters,” said Cristian Flores, who accompanied the Coral Hispana de Filadefia (Hispanic Choir of Philadelphia).

Now young adult members of St. William Parish in Philadelphia, Flores and his fellow guitarists — sister Bianca and their cousins Adriana and Anthony — grew up knowing “Father Nelson” as a priest, a family friend and a guitar teacher.

“He showed me some things when I was still learning to play,” said Flores. “And he said, ‘Just calm down; God’s got your back. Just play whatever you feel in your heart.’”

The Coral Hispana joined the Cathedral Choir, the Archdiocesan Choir, the Philadelphia Catholic Gospel Mass Choir and close to 30 musicians in performing more than 15 hymns – as well as the parts of the Mass – during the two-hour liturgy.

A friend of Archbishop Perez since his seminarian days, Thillet worked with then-Father Perez in coordinating a music education program at the former Catholic Institute for Evangelization in North Philadelphia.

The center, where then-Father Perez served as founding director from 1993 until 2002, provided faith formation, catechesis and fellowship opportunities after the closure of St. Henry Parish in 1993.

“He loves music,” said Thillet. “He plays organ and guitar; he’s very gifted. And he was very, very supportive of music education for the inner city community, for young people. He put passion into it, looking for grants, and the program became so successful.”

Thillet also counts Archbishop Perez as a spiritual director, one who provided critical support when her husband, composer Diego Correa, died suddenly four years ago. Then-Bishop Perez celebrated the funeral Mass where the couple’s son, Joel, performed their composition “Eso Me Basta (That Is Enough for Me).” 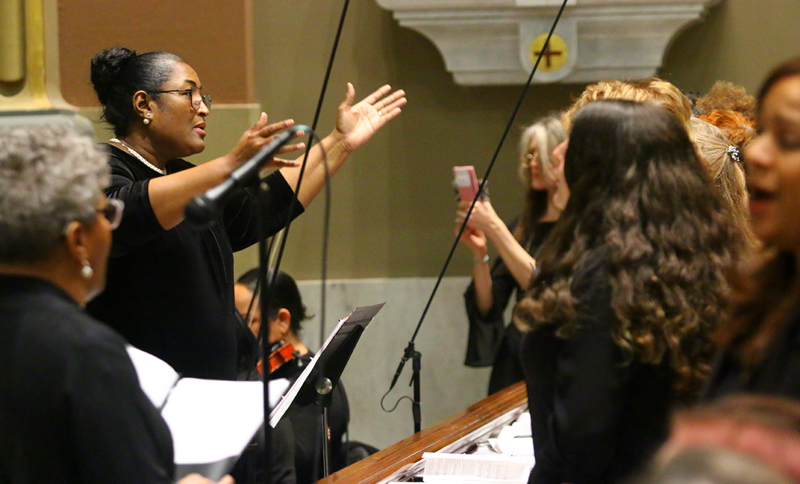 That hymn – based on the Suscipe prayer by St. Ignatius of Loyola – was on the program for the archbishop’s installation Mass along with several other works in Spanish.

A number of the selections highlighted composers who share Archbishop Perez’s Cuban ancestry: “Virgen Mambisa (Virgin of the Mambises)” by Rogelio Zelada and Orlando Rodriguez honored Mary in her role as the patroness of Cuba; “Desde la Aurora Hasta el Ocaso (From the Rising to the Setting of the Sun)” was written by Father Juan J. Sosa, a Havana native who serves as the president of the National Hispanic Institute for Liturgy; “Bienaventurados (Blessed)” was penned by Cuban immigrant Lourdes C. Montgomery.

Charlene Angelini, director of the Cathedral Choir, said Archbishop Perez had three specific musical requests for the Mass: “Pescador de Hombres (Lord, You Have Come)” by Cesareo Gabarain; “Sound the Bell of Holy Freedom,” written by Norbertine Father Andrew Ciferni and Norman Gouin for the 2015 World Meeting of Families; and “Jesus, Hope of the World” by Deanna Light and Paul Tate, which formed the theme for the Mass.

In planning the rest of the liturgy, Angelini said she strove to “blend languages and style, while keeping the intention of the Mass at the center.”

Cortlandt Matthews, the cathedral’s composer in residence, set responsorial Psalm 1 to music, while the liturgy’s parts were taken from the “Mass of Saints Peter and Paul” by Normand Gouin.

Angelini said two pieces – “El Cantico del Alba (The Song of the Dawn)” and the “Salve Regina” – were drawn from Frank La Rocca’s “Mass of the Americas,” which incorporates traditional, modern and Mexican folk tonalities with Latin, English and Nahuatl, the language in which Mary spoke to St. Juan Diego during her apparition at Guadalupe in 1531.

In divvying up the musical duties for the Mass, Angelini said the plan was to make sure each group had “an opportunity to sing at a key moment in the Mass.”

That strategy resonated well with Tonya Taylor-Dorsey, director of the Philadelphia Catholic Gospel Mass Choir, who composed the setting for the liturgy’s acclamation before the Gospel.

“To me, the ‘alleluia’ represents the highest praise ever,” said Taylor-Dorsey. “So the fact that we’re doing the Gospel acclamation is just everything to me, it really is.”

Taylor-Dorsey noted that several members of the gospel choir had traveled from Delaware and New Jersey to participate. During the liturgy’s prelude, the ensemble had many in the cathedral clapping to Marshall Carpenter’s “He Reigns Forever,” which has become a signature piece for the group.

Several musicians found themselves overcome with emotion throughout the installation Mass.

“There were times that I couldn’t even see the words on the page because I had tears in my eyes,” said Julie Thillet of the Coral Hispana, who like many of that group’s members has known Archbishop Perez since his earliest years of priesthood.

Angela Taylor of the Philadelphia Catholic Gospel Mass Choir agreed that serving at the Mass had been an intense experience.

“This has been such an emotional, evangelical, faith-filled event,” said Taylor, a member of St. Martin de Porres Parish in Philadelphia.

Composer Giovanni Morales of the Coral Hispana said he found himself “having to take a step back at times and just admire and give thanks to God” for the liturgy.

Guitarist Bianca Flores agreed, saying she never expected to be performing while “Father Nelson” was installed as an archbishop.

“It’s just unreal, since he’s like family to us,” she said, adding that she eventually hopes “to see him (made) pope.”

Morales noted he was impressed by the music’s ability to present “the cultures in their diversity and traditions, all while keeping the sanctity of the holy Mass.”

Angelini said that’s exactly what she’d hoped to accomplish, since “music has the ability to connect people, both aurally and spiritually.”

Composers Taylor-Dorsey and Thillet took that to heart. Even though they had never previously worked together, they discussed a collaboration for a bilingual Mass setting that marries both gospel and Latino styles. They plan tentatively to begin working on the project later this spring.

Until then, many in the local liturgical community are content to savor the beauty of the installation Mass.

“It was great to celebrate someone so close to my family becoming the leader of our church here in Philadelphia,” said Eliza Thillet, a soprano in the Coral Hispana. “I cannot think of a better way to say ‘welcome home’ to our dear Father Nelson.” 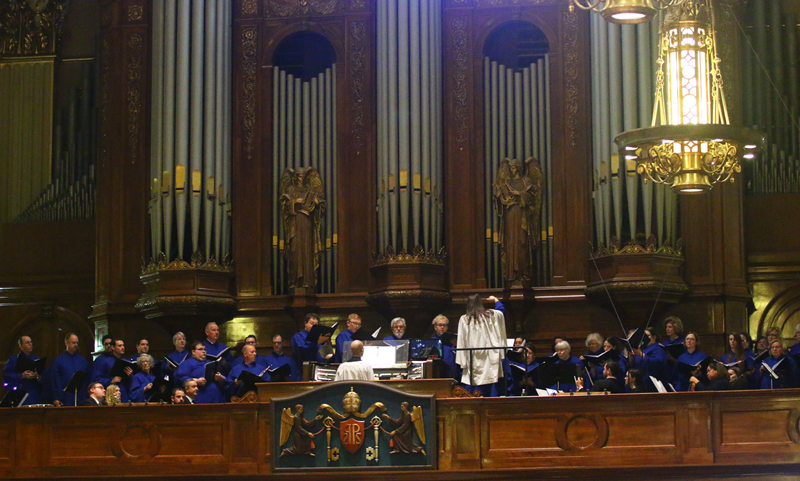 NEXT: Priest mentor to Archbishop Perez still going strong at 89