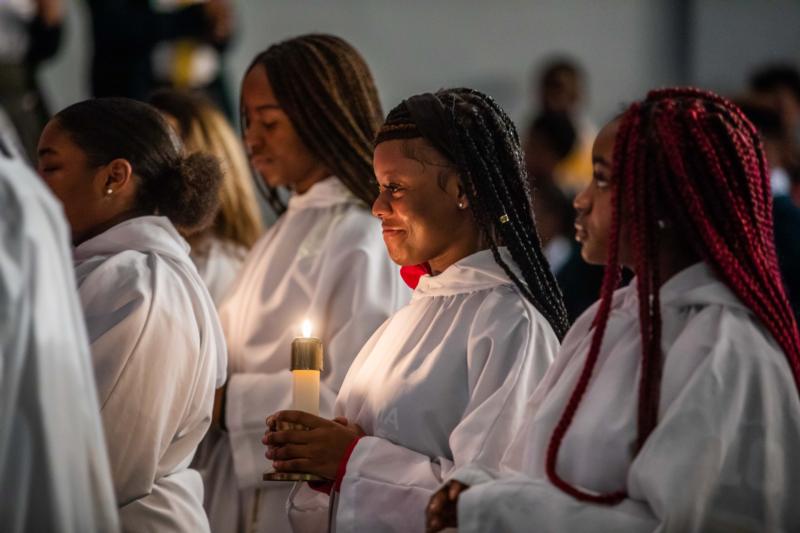 Altar servers are seen as Washington Archbishop Wilton D. Gregory celebrates Mass with students at Archbishop Carroll High School in Washington Feb. 5, 2020, to mark Black History Month. Archbishop Gregory, the first African American to lead the Archdiocese of Washington, told the students that the month of February is an opportunity to spend time looking at the heritage and history of African Americans. (CNS photo/Andrew Rozario, Catholic Standard)

The Washington area is full of historical monuments and markers “reminding us of the history that belongs to African Americans,” the archbishop said at a special Mass celebrated Feb. 5 at the school to mark the special February observance.

Archbishop Gregory is the first African American to lead the Archdiocese of Washington.

The “Father of African American History,” Carter Woodson, was the dean of Howard University in Washington and built a career on sharing African American history in publications. Woodson worked to establish Black History Month.

“What he did and what he invites us to recall is to discover our heritage, to rediscover the history and accomplishments of men and women of color,” the archbishop said. “His vision is not simply looking backward, it’s looking forward as well.”

Reflecting in his homily upon the people of Nazareth who turned Jesus away in the Gospel of Mark, Archbishop Gregory spoke about the “disease that causes us to shy away from an invitation to greatness,” that not only infected the Nazarenes, but also infects many today.

“The people of Nazareth were threatened by Jesus because they thought that he was asking them to become more than they were,” he said. “And indeed he was. Indeed he invites all of us to greatness.”

In learning more about the heritage and greatness of men and women of color, Archbishop Gregory said “we might be encouraged to believe that we, too, can be contributors to the future.”

The archbishop expressed his hope the community at Archbishop Carroll High School will learn about “our history, and from learning about our history, dream bright, future dreams for tomorrow.”

Archbishop Gregory also spoke to the students about the recent death of retired NBA legend Kobe Bryant and his daughter, Gianna, who were among nine people killed in a helicopter crash Jan. 26.

“Faith was very important to Kobe Bryant; his Catholic faith was a source of strength for him and his daughter,” the archbishop said, noting how Bryant was reported to have attended Mass with his daughter before departing on the helicopter. “It is my prayer that as we commemorate him and remember him, we also remember his religious heritage and the pride he had in his faith.”

NEXT: Remains of aborted babies now in final resting place in Indiana cemetery