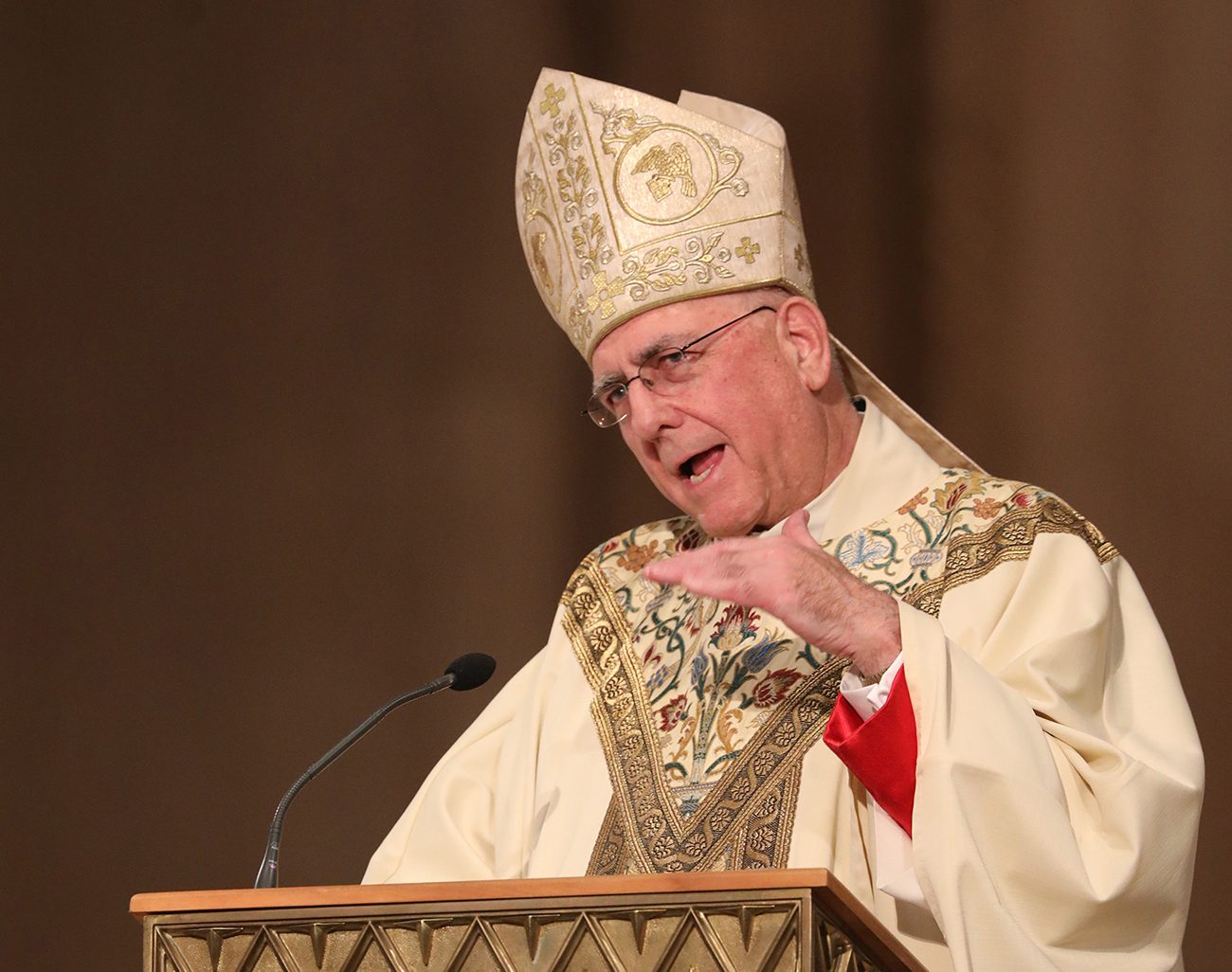 Archbishop Joseph F. Naumann of Kansas City, Kan., delivers the homily during the opening Mass of the National Prayer Vigil for Life Jan. 23, 2020, at the Basilica of the National Shrine of the Immaculate Conception in Washington. In a Feb. 25 statement, Archbishop Naumann, chairman of the U.S. bishops' Committee on Pro-Life Activities, said, by blocking two pro-life bills, the U.S. Senate has rejected "two critical human rights reforms" strongly supported by most Americans. (CNS photo/Bob Roller)

WASHINGTON (CNS) — By blocking two pro-life bills from going to the floor of the U.S. Senate for a vote, senators “failed to advance two critical human rights reforms that most Americans strongly support,” the chairman of the U.S. bishops’ pro-life committee said late Feb. 25.

Largely because of “nearly unanimous Democratic opposition to the measures,” as National Right to Life noted, neither measure received the 60 votes needed in the Senate to overcome a filibuster and advance to a vote on passage.

The Pain-Capable bill, which would protect unborn children from late-term abortions, failed to advance by a vote of 53 to 44.

The Born-Alive bill failed to advance by a vote of 56 to 41. It would prohibit infanticide by ensuring that a child born alive following an abortion would receive the same degree of care to preserve her life and health as would be given to any other child born alive at the same gestational age.

“It is appalling that even one senator, let alone more than 40, voted to continue the brutal dismemberment of nearly full-grown infants, and voted against protecting babies who survive abortion,” said Archbishop Joseph F. Naumann of Kansas City, Kansas, chairman of the U.S. Conference of Catholic Bishops’ Committee on Pro-Life Activities.

“Our nation is better than this, and the majority of Americans who support these bills must make their voices heard,” he added in his statement.

Carol Tobias, president of National Right to Life, said in a statement issued following the votes: “These bills would have protected very developed, living unborn children who can feel pain and those babies who are born alive following an abortion who are often allowed to die from neglect.”

“Shame on pro-abortion Democrats for not being willing to even protect living babies that survive abortion or to protect late-term babies who feel the excruciating pain of abortion,” she added. “Their constituents will want to know why they are willing to allow these horrors to continue.”

Jennifer Popik, National Right to Life’s legislative director, said that in the eyes of the law, “babies born after an abortion are considered separate individuals … and every effort should be made to preserve their lives.”

“Babies capable of feeling pain are considered by the medical profession to be a ‘second patient’ and should be treated in the law as the pain-capable human beings that they are,” she added.

Father Frank Pavone, national director of Priests for Life, and other pro-life leaders praised Graham and Sasse for sponsoring the bills and Senate Majority Leader Mitch McConnell, R-Kentucky, for setting the vote on the measures for Feb. 25.

“You would think that those elected to public service would know the difference between serving the public and killing the public,” Father Pavone said in a statement. “With few exceptions, that is apparently not the case among Democrats in the U.S. Senate, as once again, a largely party-line cloture vote failed to advance two key pro-life bills.”

In pushing back against the bills, Senate Minority Whip Dick Durbin, D-Illinois, and other Democrats said the Republicans were “fabricating an infanticide narrative,” when infanticide is already illegal in the U.S.

Sasse has noted several times that in 2002, Republicans and Democrats worked together to ensure that children born alive are recognized as persons under federal law. “But, unfortunately,” he said, “federal law does not criminalize the denial of care to babies who survive an abortion.”