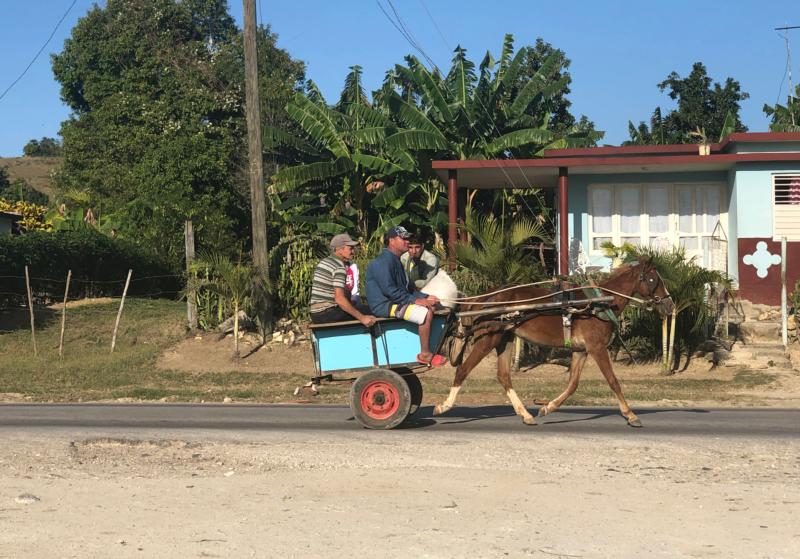 A group of Cubans travels via horse cart Feb. 8, 2020, in the countryside outside Santiago, Cuba. Reflecting on the scenes he saw on a 11-hour road trip from Santiago en route to Havana over two days, New York Cardinal Timothy M. Dolan said he was grateful to have witnessed the daily routine of people on the island. (CNS photo/Rhina Guidos)

HAVANA (CNS) — At first, the trip seemed daunting: an 11-hour drive through the Cuban countryside from Santiago in the southeastern part of Cuba toward the capital of Havana on the other end of the island.

But U.S. Cardinal Timothy M. Dolan had his heart set on celebrating Mass at the Shrine of Our Lady of Charity of El Cobre near Santiago, arguably the most sacred space on the island.

To get there, he waited some six hours at the airport in Havana to board an old plane bound for Madrid but making a stop in Santiago. It was the only way to get there because of measures imposed by the U.S. on flights into some cities on the island, including the city closest to El Cobre. Adding to the logistical nightmare, a fuel shortage also brought on by U.S. sanctions nixed the option of returning to Havana by plane.

But little deters the archbishop of New York.

“At first, we were dreading it,” Cardinal Dolan said of the 545-mile trip, which would cut into precious time of his six-day mission trip Feb. 7-12, his first to the island. “To think that we were able to travel the Cuban version of the Trans-Siberian Railway.”

But with his optimism, he took the circumstances as an opportunity.

“We had the ability to see people, the homes and the baseball games on the side of the road,” Cardinal Dolan said in a Feb. 11 interview with Catholic News Service in Havana. “As you’re looking out the window, what do you see? You see moms holding babies, you see husbands coming home from work with the little horse carts, you see smoke coming from the chimneys, you see neighbors chatting, you see the kids playing. You know, that’s life. That’s how God intended it.”

The view from the road allowed him to see some of the material scarcity of the country, the lush countryside and also the similarities of the Cuban people and their counterparts in the U.S. — in many ways similar to what he sees when he visits family in St. Louis, when he takes a walk down the street, he said.

It made him realize, he said, the Cuban people “indeed, we are family and that’s especially vivid in the church.”

The majority of his visits included facilities where Catholics, including many women religious, help the poor and sick, as well as churches large and small spread throughout the island and, in many cases, staffed by Catholics from abroad serving there.

“I was very impressed with the people that I met,” he said. “The churches, while not full, seemed to have a good representation. I was especially happy to see young couples and families especially at (the El Cobre shrine) and other churches. I was very inspired to see a good number of vocations.”

He said he was grateful the government welcomed priests and women religious from abroad to the country. For some communities, it’s the only way to keep the church alive in Cuba.

He also learned about the difficult conditions in which some of them serve, including working in places where there are no physical churches. Because of the scarcity of materials, damaged or boarded up churches, or places of worship confiscated in the past, some Catholic communities in Cuba meet much like the first Christians, in small groups at private homes.

“I met this priest in Santiago, a young priest, this priest who has no church,” the cardinal recalled. “He’s the pastor of an area, and every day he visits a home. He goes to one a day and he spends five or six hours. He does catechesis with young people, hears confession, he anoints the sick, he celebrates Mass. They have a festive meal together. They talk, have some faith instruction and share. You know, that’s the Acts of the Apostles.”

The Acts of Apostles in the Bible describes the early Christian Church and how the faith spread from Jerusalem to the Roman Empire. Much like the disciples described in it, the priest he met, “he’s doing what he can. He realizes what he can’t do. He realizes what he can do. And he says, like the Apostles: ‘Silver and gold I don’t have. I don’t even have a church building. But what I do have, I give in the name of Jesus Christ.’ I was very inspired by that,” Cardinal Dolan said.

He said he also was inspired by the demeanor of his brother bishops in Cuba, many who made the time to meet with him at various points on the island.

“My major observation would be my admiration of my brother bishops who seem to be extraordinarily realistic, without losing hope, knowing it’s very difficult times but they have a phenomenal sense of serenity and confidence,” he said. “They say … let’s do what we can do and do it well, and they concentrate on the pastoral, they concentrate on families, and charity, and evangelization, and catechesis, and worship, and they say the rest will take care of itself. I admire them for that.”

Along the way, he met with Archbishop Dionisio Garcia Ibanez of Santiago, Cardinal Juan Garcia Rodriguez of Havana, Archishop Wilfredo Pino Estevez of Camaguey, Bishop Emilio Aranguren Echeverria of Holguin, who is the head of the Cuban bishops’ conference, and Bishop Juan Hernandez Ruiz of Pinar del Rio, as well as Archbishop Giampiero Gloder, the apostolic nuncio to Cuba.

Of the Cuban bishops, Cardinal Dolan said: “When asked, they give their honest opinion about what they’d like to see improve. They take opportunities. They have to dialogue with the government. They just seem radiantly confident and serene, while never naive.”

But it was obvious he had a soft spot for women religious serving the poor in Cuba, stopping to offer extended hugs and taking time to talk to them and offer great appreciation for their work.

“I have confidence in the future of the church because of your presence,” he told the community of Discalced Carmelites he met at the monastery of St. Teresa and St. Joseph in Havana.

With them, he celebrated his last Mass on the island Feb. 12 and stopped to film a brief video with them, as they looked on from behind a grille.

“This is a highlight today,” he said in the video he planned to share upon his return to New York. “In the heart of Havana we find beautiful cloistered contemplative Carmelite sisters. In America, we kind of have the impression that maybe the church in Cuba is weak and fragile and that they have difficulties and tension. Yes, but so do we at home. Right?

“But to see these wonderful sisters, to know they are praying daily, giving their lives in silence and penance and prayers for the good of souls, the conversion of sinners, for the glory of God’s name, for the love of Jesus and his church, what a great blessing that is,” Cardinal Dolan said. “So, hermanas (sisters), gracias. We love you in America.”

PREVIOUS: Change to public charge rule seen to have chilling effect on immigrants