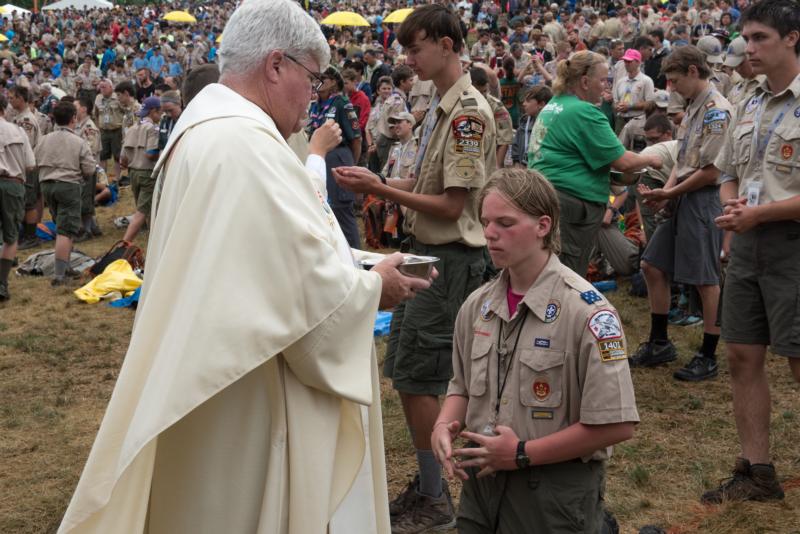 A Scout receives holy Communion during Mass July 23, 2017, at the Boy Scout Jamboree in Glen Jean, W.Va. Boy Scout councils and units sponsored by Catholic parishes and other entities will not be affected by the Chapter 11 bankruptcy case filed Feb. 18, 2020, by the Boy Scouts of America, said the chairman of the National Catholic Committee on Scouting. (CNS photo/Michael Roytek, courtesy Boy Scouts of America)

WASHINGTON (CNS) — Boy Scout councils and units sponsored by Catholic parishes and other entities will not be affected by the Chapter 11 bankruptcy case filed by the Boy Scouts of America, said the chairman of the National Catholic Committee on Scouting.

Jim Weiskircher told Catholic News Service in an email late Feb. 18 that all local Scout councils and units will continue “business as usual, while monitoring the situation.”

The Boys Scouts of America filed for bankruptcy protection in federal court in Wilmington, Delaware, Feb. 18 in an attempt to work out a compensation plan in response to hundreds of sex-abuse lawsuits.

The flood of cases involves several thousand men who claim to have been abused as scouts by scoutmasters and other leaders decades ago. The cases have been filed as some states changed statute-of-limitation laws.

Weiskircher wrote that the National Catholic Committee on Scouting does not plan to follow the route of the Church of Jesus Christ of Latter-day Saints, which as of Jan. 1 broke with BSA and introduced its own global youth program.

The withdrawal of 400,000 members was a blow to the BSA, dropping its membership below 2 million, the lowest since the World War II era. Membership peaked at more than 4 million in the 1970s.

The BSA website confirmed that local “unit meetings and activities, district and council events, other Scouting adventures and countless service projects will take place as usual” despite the bankruptcy filing.

Local councils “will have an opportunity to contribute” to a trust fund established by BSA to assist abuse victims, the website added.

Weiskircher said the Catholic Church and BSA “are committed to making their youth programs safe and that there are many safeguards in place.”

“Unfortunately, some youth have been seriously hurt by unscrupulous adults in the past,” he added. “Scouting under the auspices of the Catholic Church continues to be an excellent program to help young people to grow and develop the values that are central to Christian discipleship.”