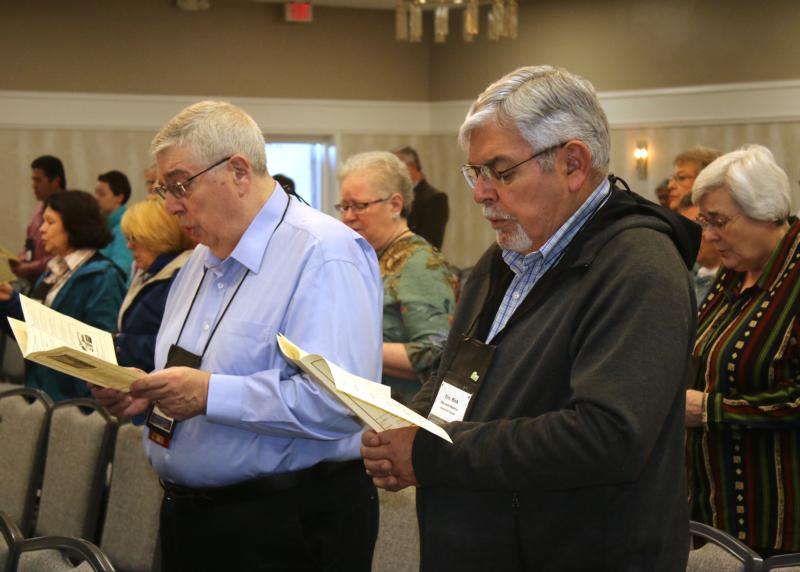 TUCSON, Ariz. (CNS) — Robert Feduccia, founding director of the Youth Liturgical Leadership Program at St. Meinrad School of Theology in St. Meinrad, Indiana, made respect for diversity a key theme in his keynote, “Liturgy in a Missionary Key,” at the 58th Annual Southwest Liturgical Conference Study Week in Tucson.

Feduccia also focused on creating a new model of catechizing, saying the publication in 1992 of the long-awaited “Catechism of the Catholic Church” was unable to stop the decline in the number of people, especially young people, who self-identify as Catholics.

He was one of several keynote speakers and workshop presenters at the mid-January conference, which had as its theme : “Go in peace, glorifying the Lord by your life.”/”Glorifiquen al Senor con su vida. Pueden ir en paz.”

“Catholics born after 1980 are the least likely group of religious believers to pray daily,” he said.

Among Hispanic and other immigrant populations, as second and third generations come forward, they are far more likely to neglect daily prayer and weekly Mass attendance, and find religion to be less important in their lives.

Former Catholics who reported they no longer identified as part of a religious community — called “nones” — said they left for a variety of reasons: the mission and message they were given were vague; answers to difficult questions were superficial; the Gospel and life in the church were not considered “good news”; the responses did not address their emotional needs or their pain; and they found other things more distracting, such as social media and the business of life.

Baby boomers were content to live with the answers of faith — “seven-second answers” — laid out by the old Baltimore Catechism, Feduccia said. For millennials, “we responded to all kinds of questions, but we didn’t answer any of them.

“With the new catechism, the U.S. bishops mandated that new religious education materials include more of the core tenets of faith, given that young people seemed to be lacking the basics. “They thought the textbooks must be the problem,” Feduccia said.

This led to why Feduccia referred to the early 2000s as the “School of Slow Answers.”

With another generation of young Catholics at risk of falling into the “nones,” Feduccia proposed a “School of Spirituality and Encounter.”

“The key to remaining active is daily prayer,” Feduccia said. “This is not a crisis of catechesis. It’s a crisis of Spirit.”

During the past two decades, there has been a resurgence of liturgical practices reflecting a return to traditional worship, including a desire for Gregorian chant. Feduccia said liturgical reforms of Vatican II aren’t being undone just because of a longing on the part of some people for the old forms of worship.

A self-described “liturgical pragmatist,” Feduccia said there doesn’t need to be friction between those who long for chant, and those who embrace post-Vatican II forms of liturgy.

Feduccia told a story about his visit to the Holy Land, and a sense of disappointment he felt about not feeling any special connection to God while visiting the places where Jesus lived. It wasn’t until he stood at the Western Wall, the remnants of the Temple, that things changed.

“It’s said, ‘The Divine Presence never leaves the Western Wall,'” Feduccia said. “Deep in my heart, I heard ‘Yes, Robert. This place, this church. I have made a covenant with you and I will not leave.'”

That’s why there isn’t a real dichotomy between different elements within the church, because God is present in all of it, he said.

When someone approaches him to ask if Gregorian chant is acceptable for his parish, Feduccia said, his response is simple: “I don’t know. I don’t know the needs of your parish. Are you in contact with the homes and the lives of your people? You tell me.”

Parishes shouldn’t be looking for someone else to solve their issues, because the answer is there in the community. “The fullness of salvation rests in every parish,” he said.

Liturgists have the ability and are in the position to do something about this. Through worship, “you can open up people’s hearts. That’s your job.”

PREVIOUS: All parishioners urged to bring new people into church