Georgetown U. will divest from fossil fuels in a decade 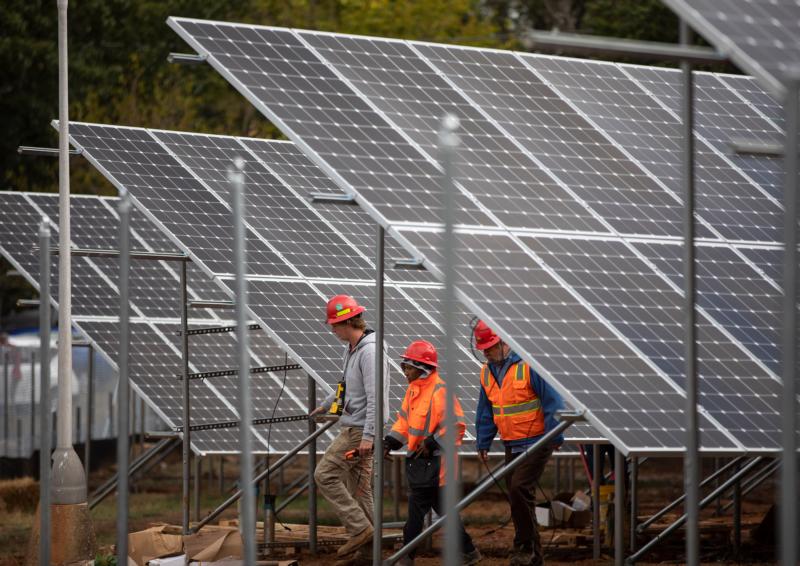 Workers in Washington are seen near solar panels Oct. 17, 2019, on the property of Catholic Charities of the Archdiocese of Washington. Georgetown University in Washington is embarking on a plan to stop making new investments in fossil fuels companies and gradually divest from those firms while boosting financial portfolio in renewable energy and energy efficiency. (CNS photo/Andrew Biraj, Catholic Standard)

WASHINGTON (CNS) — Georgetown University is embarking on a plan to end new investments in fossil fuels companies, gradually divest from those firms and boost its endowment portfolio in renewable energy and energy efficiency.

The university’s board of directors decided Feb. 6 to take the steps following a yearslong campaign by students and other activists to encourage the divestment in an effort to address climate change.

The step is the latest in a national and international trend that finds Catholic banks, institutions, organizations, dioceses and religious congregations divesting from companies primarily focused on fossil fuel extraction.

In announcing the decision, university president John J. DeGioia said in a statement the decision was rooted in the school’s Catholic and Jesuit identity and builds on the school’s work to follow Pope Francis’ 2015 encyclical on the environment, “Laudato Si’, on Care for Our Common Home.”

“His words inform and strengthen our commitment to the environment, and to one another, ensuring that as we move forward, we do so in a spirit of mutual respect and collaboration,” DeGioia said in a Feb. 6 message to the campus community.

Campus divestment advocates were buoyed by the announcement.

“We are so ecstatic,” Victoria Boatwright, a Georgetown sophomore and a member of Georgetown University Fossil Free, told Catholic News Service Feb. 10.

She said the organization had tried for eight years to convince school administrators and the directors that divestment was in the best interest of the planet and would promote Catholic social teaching.

“The part that really respected what we’ve done is how much our proposal and our memos were incorporated in their policy,” Boatwright said. “We explained how fossil fuels should be considered an unjust investment.”

The board’s decision came on the day Georgetown University Fossil Free had scheduled a student referendum to pressure school officials to act on the matter. Boatwright said that 90% of the more than 2,000 students who voted supported divestment.

The decision calls for the school to divest from its public investments in five years and private investments within a decade.

Earlier, the university’s Committee on Investments and Social Responsibility unanimously recommended in a Jan. 16 memo to the board’s Committee on Finance and Administration that it was time to divest from fossil fuels and expand investments in renewable energy and energy efficiency.

The committee, which includes faculty, students and staff, expressed concern for climate change among its reasons in filing its recommendation. It also said divestment would allow the university to respond to Pope Francis’ call to care for creation.

“Georgetown, as both a Catholic and Jesuit institution and leading global university, should not only ‘do no harm’ through management of its endowment but also use its power as an institutional investor to invest in solutions to climate change,” the committee’s memo said.

Peter Marra, director of the Georgetown Environment Initiative, in a statement released by the university, called the divestment decision “a major step forward” and “one of many in a comprehensive and complex set of commitments that Georgetown is making in sustainability and to the environment more broadly.”

As part of its yearslong campaign, the student organization in 2018 gained support from the board’s finance and administration committee for a plan to avoid investments in companies whose principal business is extraction of oil from “tar sands.” Oil extraction from tar sands requires in most parts of the world the destruction of forests to access oil contained in sand that is then refined in an energy-intensive and heavily polluting process.

NEXT: San Diego bishop calls for prudence when casting vote