Group puts push for racial justice in focus for Lent 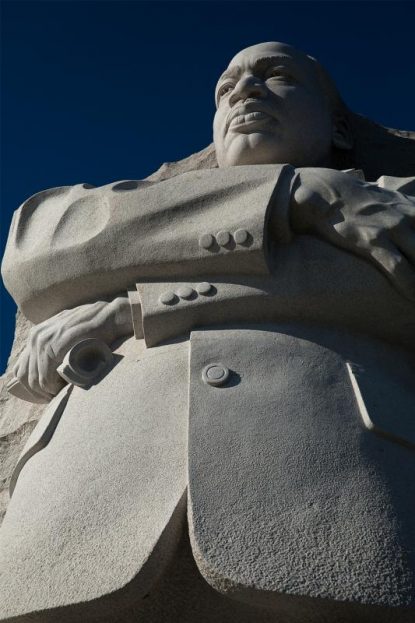 The Martin Luther King Jr. Memorial is seen in Washington Jan. 17, 2020. Network, a Catholic social justice lobby, and other Catholic groups and organizations are committed to addressing racial justice and are striving to not only acknowledge the sins of the past but also do something to atone for them. (CNS photo/Tyler Orsburn)

WASHINGTON (CNS) — Catholic groups and organizations are striving not only to acknowledge the sins of the past but also do something to atone for them.

Network, a Catholic social justice lobby, issued a Lenten study guide last year, “Recommit to Racial Justice.” It has proved so popular that more copies of the six-week program need to be made whenever Network participates in conferences, according to Meg Olson, who leads Network’s grassroots mobilization team.

They fairly flew off the table at the Catholic Social Ministry Gathering in Washington in January, and Olson said, “I’m printing several hundred copies to take to L.A. for the Religious Education Congress,” an annual event that draws thousands of participants each year.

The response to “Recommit to Racial Justice” was enlightening, Olson told Catholic News Service. “Last year, especially, with the talk of racial justice, we had people accessing (it) who knew nothing about Network,” she said. The U.S. bishops had recently approved a new statement, “Open Wide Our Hearts: The Enduring Call to Love — A Pastoral Letter Against Racism,” which called racism a sin.

Some of the evidence of this response gathered by Network is purely anecdotal. Olson said one person commented, “Your ideas or material is so good and your actions so appropriate, that I look forward to Lent. By the way, I’m Jewish.”

“Last year, on Ash Wednesday, someone I had never heard from before said, ‘I go to a lot of places and meet up with a lot of your members in a lot of various situations,'” Olson said. Another woman from Portland, Oregon, said her parish was going to do the weekly “Recommit to Racial Justice” reflection sessions. “I don’t even know where to live anymore,” Olson said the woman told her. “Because of my whiteness, I feel no matter where I live it feels like I’m going to hurt a person of color.”

But “Recommit to Racial Justice” isn’t just for Lent anymore. Like previous Network Lenten study guides, “we evergreen them as soon as Easter arrives so people can use them all year-round,” Olson said.

Network, though, need not rely solely on anecdotes to measure a Lenten’s program efficacy. The design of “Recommit to Racial Justice” also followed the pattern of its previous Lenten study guides.

“What we typically do is give them a chapter a week and give them an action word. Like last year, action alerts were matching up really well with the racial justice content,” Olson told CNS. “The week of the immigration chapter was the one for the DREAM Act” House vote action alert.

“We are able to track just through our emails — after the 3,000 people have signed up — who’s opening their email, who’s downloading the chapter, who’s taking action,” Olson said.

Some Catholic institutions have recognized their own culpability on racial matters in recent years and taken steps to right wrongs.

Georgetown University in Washington acknowledged its history of slaveholding in 2016. The Jesuit school had sold 272 slaves in 1838 to keep the school from closing. Georgetown was paid $115,000, the equivalent of $3.3 million in 2020 dollars.

Georgetown committed to raise $400,000 a year to distribute to the 8,000-plus known descendants of the slaves — known as “The GU 272,” although descendants said last year the number of known slaves once held by Georgetown is expected to top 300.

If there were exactly 8,000 descendants and each got an equal payment from the $400,000 fundraising target, that would come to $50 per person per year. According to a New York Times op-ed essay by three of the descendants posted Feb. 6, the university has an endowment of about $1.6 billion.

After Georgetown’s history of slaveholding was made public, the Sisters of the Sacred Heart conducted research into its own history. It was generally believed the order owned slaves, although details were sketchy, according to Sacred Heart Sister Irma Dillard, a member of the order’s Slavery, Accountability and Reconciliation Committee.

“We knew we were involved, like everybody else in the country, in slavery, because that was what it was,” Sister Dillard told CNS in a phone interview from San Francisco. The research first zeroed in on the order’s oldest continuously operating school, founded in 1821, in Grand Coteau, Louisiana.

It turned out that the woman who “gave us the land and the first house — she was a widow — she had about 25 enslaved with her, so that’s how we started, with her enslaved people,” Sister Dillard said. A private girls-school education was costly. “When they finally started taking students, there were people who were rich in land but not in cash,” she added. “You bring a student, and they would bring one or two of their enslaved to offset the cost of tuition.” Also, Sister Dillard said, “we ended up buying a few here and there.”

At the nearby parish, “the did not want the black folks to go to hell, so they baptized and evangelized. They taught the catechism to the slaves,” she said. Parish sacramental records and handwritten journals kept by the nuns at that time led to the ultimate discovery of about 150 who had been enslaved.

Unlike at Georgetown, the Sisters of the Sacred Heart decided to “talk to the descendants first” before figuring out how to address the slavery issue, Sister Dillard told CNS. Some of their requests: “They want a memorial. They wanted as much information as we could give them. Then they asked to have a gathering at Grand Coteau,” which took place in September 2018. There, they asked further for headstones and a plaque on the old slave quarters that still stands on the academy’s property.

Both the order, corporately, and Sister Dillard, individually, are still at work on the subject. The order offers a scholarship to an African American girl to attend the Grand Coteau school, and Sister Dillard lends her voice to equality issues from California.

After all, “there’s 40 million-plus people in slavery today,” she said. “Slavery’s all about money.”