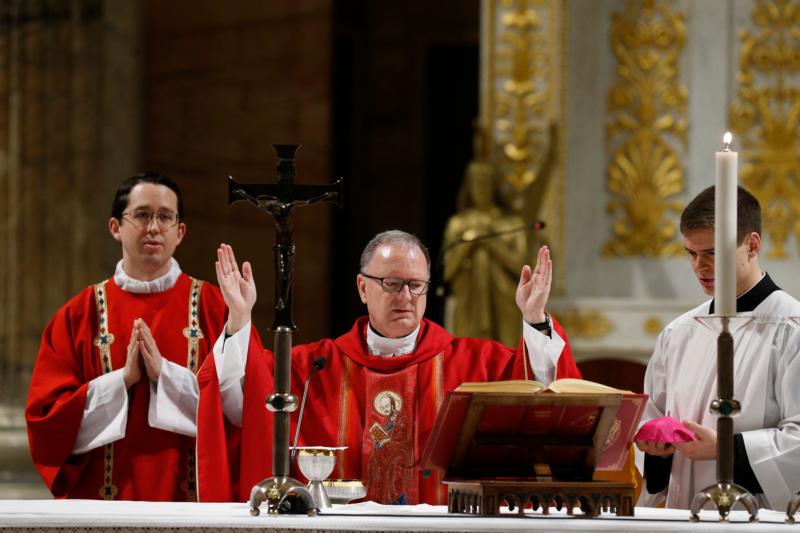 Bishop Michael C. Barber of Oakland, Calif., concelebrates Mass at the Basilica of St. Paul Outside the Walls in Rome Jan. 31, 2020. Bishop Barber has called for the Oakland Diocese of hold a eucharistic congress June 19-20 at the Cathedral of Christ the Light in Oakland. The congress is in response to a recent Pew Research Center poll showing that fewer than one-third of Catholics believe the Eucharist is the actual body and blood of Jesus Christ. (CNS photo/Paul Haring)

OAKLAND, Calif. (CNS) — Fewer than one-third of Catholics believe the Eucharist is the actual body and blood of Jesus Christ, the Pew Research Center found in a recent poll.

The majority of America’s self-identified Catholics — 69 percent, according to the poll — are either ignorant or simply mistaken about what the Catholic Church teaches on the Eucharist and the Real Presence.

“As bishop of the Diocese of Oakland, I find this shocking,” Bishop Michael C. Barber wrote in a letter to the faithful.

As part of the bishop’s response to the findings, he has called for a diocesanwide eucharistic congress June 19-20 at the Cathedral of Christ the Light in Oakland.

“With the theme ‘Stay with us, Lord!’ (Lk 24:29), I invite all the faithful of our diocese to reflect upon the centrality of the Eucharist in our lives, and to reaffirm our call to be a people nourished, fed and molded by the Eucharist itself — just as the disciples were on the road to Emmaus,” Bishop Barber wrote.

The June 19 portion of the event is designed for priests of the diocese. They will gather to hear a spiritual talk, hear from the bishop and will pray with young people of the diocese, who will lead eucharistic adoration until 11 p.m.

This will give “a chance for the priests to pray with the young people of our diocese, and a chance for the young to experience the faith of our priests,” said Father Brandon Macadaeg, rector of the Cathedral of Christ the Light.

The June 20 portion will be a day of prayer, speakers and Masses, in both English and Spanish, with a public procession of the Blessed Sacrament on the streets bordering the cathedral.

The Saturday event is aimed at engaging and inspiring the faithful, according to the planning committee, made up of priests, deacons and laypeople.

The day will begin at 9 a.m. with a talk in English by Franciscan University-educated evangelist Michael Gormley from Texas, followed by Mass celebrated by Bishop Barber.

After the Mass, attendees will begin a procession that will depart the cathedral to carry the Eucharist around the city blocks bordering the cathedral. Those planning to attend the Spanish-language track are invited to the cathedral plaza to take part in the procession.

The procession will mark the end of the English-language track. Jesse Romero, author, radio host and evangelist, will address the Spanish-speaking audience in the cathedral. Bishop Barber will follow Romero’s talk by celebrating Mass in Spanish.

Volunteers will be needed for hospitality and in assisting with the procession. Assistance is being sought from the Order of Malta and the Knights of Columbus. Children who have received their first Communion in 2020 are invited to attend wearing their garments from that special day.

Father Macadaeg attended the International Eucharistic Congress in the Philippines in 2016, along with Bishop Barber and about 100 people from the diocese, including priests, religious and laypeople.

What can a eucharistic congress bring to the Diocese of Oakland?

“We know we will succeed when we build a culture of prayer around the Congress,” Father Macadaeg told The Catholic Voice, Oakland’s diocesan newspaper. “The culture of prayer,” he said, “that’s where miracles happen. That’s where the Spirit begins to move.”

The Oakland Diocese’s eucharistic congress committee has put together resources for prayer, such as how to conduct a Holy Hour. The materials are available at https://oakdiocese.org/eucharistic-congress.

Those unable to attend the eucharistic congress, he suggested, might be able to spend an hour of Adoration in their own parish. “Be with us in that regard,” he said.

The congress provides opportunity for the diocese to become a “powerhouse of prayer,” he said. “Here’s a chance for us to do this.”

He noted that Bishop Barber’s request for prayers during Advent were well received. A culture of prayer across the diocese could grow from that.

“Can we pray for each other, although we may not be in each other’s presence, or know who each other are?” Father Macadaeg said. “An intentional group of disciples praying with each other, for it each other. It’s powerful.”

NEXT: Sasse bill is about providing care for abortion survivors, say supporters